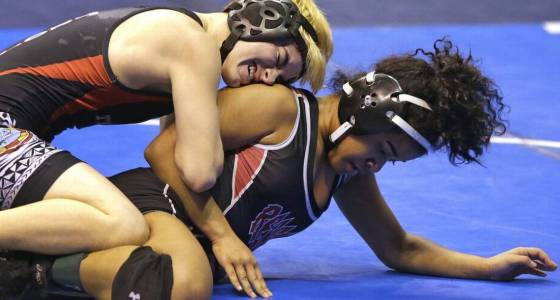 Mack Beggs, the transgender wrestler from Euless Trinity High School in Euless, Texas, is halfway home to capturing the Class 6A state girls wrestling championship in the 110-pound weight class.

Both of Beggs’ opponents managed to avoid being pinned, but neither provided enough resistance to make the match close at the UIL Wrestling State Tournament.

For the most part, Friday’s action was routine despite the sudden swirling controversy around Beggs, whose gender transition from female to male became a news story after the regional tournament.

Beggs’ matches did not draw any more of a crowd than any other match taking place simultaneously on the 10 connected mats inside the mostly filled Berry Center in the Cypress-Fairbanks school district.

And while fans mostly cheered Beggs’ two victories, there were some outliers.

One woman could be heard after Beggs’ victory over Engert yelling at the Tascosa wrestler, “At least you got out there.”

At the regional tournament, two wrestlers forfeited rather than grapple with Beggs. One, Coppell’s Madeline Rocha, who had already qualified for state, lost her opening-round match Friday in Cypress.

After losing to Beggs, who has has been on testosterone treatments since October 2015, Engert left the mat in tears and her coach tersely declined an interview request for her wrestler. Many of the coaches have said they’re not upset at Beggs, but just the predicament of their girls having to wrestle against an athlete on testosterone.

But at least one wrestling parent, Patti Overstreet, yelled “cheater” at Beggs.

“Look at how beefed up she is,” Overstreet said. “It’s because she’s taking an enhancement. Whether she’s a boy, girl, wants to be purple or blue it doesn’t matter. When you’re using a drug and you’re 10 times stronger than the person you’re wrestling because of that drug, that shouldn’t be allowed.”

One athletic director watching the action, who asked for his name not to be used because of the sensitivity of the issue, said he believes “there is cause for concern because of the testosterone,” adding, “I think there is a benefit.”

While Beggs has said he’d prefer to wrestle against boys, University Interscholastic League rules force Beggs to compete as a girl. The UIL uses an athletes birth certificate to determine gender, a measure overwhelmingly approved by the state’s school superintendents a year ago.

The rule prohibits girls from wrestling in the boys division and vice versa.

UIL provides an exception for a steroid that is prescribed by a medical practitioner for a valid medical purpose. The UIL has reviewed Beggs’ medical records and granted him permission to compete while taking testosterone.

Beggs and Trinity coach Travis Clark decided prior to the tournament to decline interviews until after the tournament when Beggs hopes to earn his first state title in three trips to state.

. Lisa Latham, the mother of Beggs’ first opponent Friday, said she wanted her daughter to forfeit the match and her chance of earning a state medal.

“I wanted her to forfeit as a protective mom,” Lisa Latham said. “She’s a fighter. She’s not a quitter. She’s a senior. She fought for the last three years to get here. She was going to see it through, even though I wasn’t sharing the same opinion.”

Tyler Latham shook hands with Beggs, who then raised his arms and pointed high into the stands where his mother, father, sister, stepmom and stepdad were all seated in the same row in the second deck of seating.

Prior to the start of the tournament, UIL deputy executive director Jamey Harrison addressed Beggs’ situation and said he does not believe the UIL’s birth certificate rule, because of its overwhelming support, will be “changed anytime soon.”

“This was a lengthy, lengthy process in deciding the various options we had in front of us so that the legislative council could make an informed decision,” Harrison said.

The finals are scheduled for 4:45 p.m. Saturday.

Another Tarrant County wrestler in the same weight class as Beggs, Anna Delaney of Fort Worth Paschal, lost her medal bid in the quarterfinals, falling to Annamarie Crixell of Conroe Oakridge.

The suit claims that allowing a wrestler to compete on testosterone exposes other female athletes to bodily harm.