Due to climate change and farming, Turkey's Lake Tuz is drying up

Lake Tuz, central Turkey, has been home to huge colonies of flamingos for centuries. They breed and migrate there when it is warm. The lake's shallow waters are the perfect environment for them. 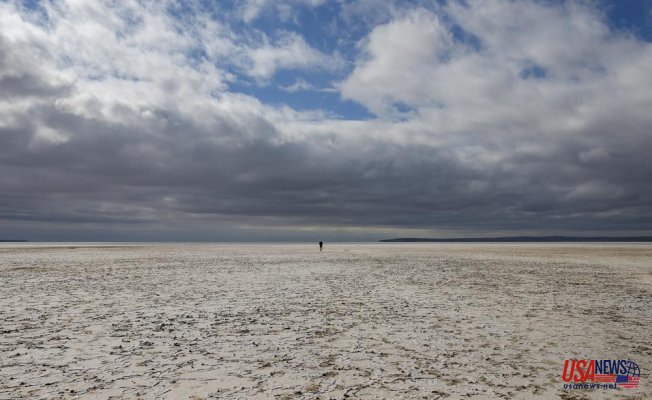 A heart-wrenching scene took the place of the beautiful sunset photos taken by Fahri Tunc, a wildlife photographer. The lake bed was cracked and dried up, with flamingo eggs and adults scattered everywhere.

Turkey's second largest lake, with a surface area of 1,665 km (643 miles), the lake has receded completely. Experts believe that Lake Tuz (or Salt Lake in Turkish) has been affected by climate change-induced drought. This is due to decades of poor agricultural practices that have exhausted the underground water supply.

"There were approximately 5,000 young Flamingos. Tunc, who is also the head of the Turkish environmental group Doga Dernegi's regional branch, said that all the flamingos died because there was no water. It was a terrible scene. It is not something that I can forget. I pray that I never come across this scene again."

Many other lakes in Turkey have also dried up or receded to alarming degrees due to low precipitation and unsustainable irrigation. Experts warn that severe drought and desertification are imminent in the entire Mediterranean basin, including Turkey.

HaberTurk television reported that fishing boats could not approach a dock in Lake Van, Turkey's largest lake. It is located in Turkey's east.

"(We have) rising temperature and decreasing rain, and, on the other hand, the water requirements for irrigation in agriculture," stated Levent Kurnaz of Bogazici University's Center for Climate Change and Policy Studies. It's a terrible situation in Turkey right now.

According to Turkey's Anadolu Agency, a study using satellite imagery by Turkey's Ege University has shown that the water level at Lake Tuz began to fall in 2000. According to the study, rising temperatures, increased evaporation, and insufficient rainfall caused the lake to recede completely this year.

A sharp drop in underground water levels was also observed around Lake Tuz (a hypersaline lake which straddles three Turkish provinces, Konya, Ankara and Aksaray), according to the study.

The Konya basin, central Anatolia, that includes Lake Tuz was once called Turkey's breadbasket. Photographer Tunc stated that the region's farmers have switched to producing profitable, but more water-intensive crops like alfalfa and sugar-beet, which has drained groundwater resources. Tunc said that farmers have dug thousands upon thousands of unlicensed wells, while the streams that feed the lake have dried up and been diverted.

Environmental groups claim that poor agricultural policies by the government play a major role in the decline of Turkey's lakes.

"If you don’t pay them enough, the farmers will plant whatever is water-intensive and make money for you." Kurnaz stated that if they are told it isn't allowed, they won't vote in your favor at the next election.

Overuse of groundwater makes the area more vulnerable to sinkhole formation. Numerous such depressions were discovered in Konya's Karapinar region, including one that Associated Press journalists spotted next to a freshly harvested alfalfa crop.

Tunc, 46-year-old Aksaray native, is saddened to think that he will not be able enjoy the flamingos as much with his 7-month old son as he did with him 21 years ago. However, Tunc is hopeful that Lake Tuz will be regenerated if the government does away with water-intensive agriculture.

Kurnaz is a climate scientist who is less optimistic.

They keep telling people to not use groundwater for agriculture, but people don't listen. Kurnaz stated that there are approximately 120,000 unlicensed wells within the region. "Everyone is pumping water as though it will last forever."

"But if you live on a flat area, you can have as much rain as you like and the groundwater won't be replenished in a very short time. He said that it takes thousands of years to replenish the underground water tables in central Anatolia.

Climate change is partly responsible for the drought and flamingo deaths at Lake Tuz, which were both caused by severe weather conditions.

Wildfires ravaged large swathes of forest along Turkey's southern coast in July. Eight people were killed and thousands fled. Floods killed 82 people in parts of the country's Black Sea coast. An earlier layer of sea mucilage that threatened marine life was a result of high temperatures and poor waste management.

Turkey signed the 2015 Paris Climate Agreement, but it waited until now to ratify it. This was because it wanted to be reclassified to a developing country rather than a developed country to avoid exceeding its emission reduction targets. At the same time as they ratified climate agreement, Turkish lawmakers made a statement rejecting the designation of developed country.

Cengiz Erkol (54), a farmer from Eskil, was inspecting the irrigation system in his field for animal feed.

He said that the waters aren’t as strong or as abundant now as they were in the past. "I have four kids. The future is not looking good. Every year is worse than the last."