Famagusta 22°
clear sky
BUSINESS EDUCATION ENTERTAINMENT HEALTH POLITICS SCIENCE SPORTS TECHNOLOGY
06:57 Biden's focus on climate and families is trimmed to $2T plan
15:51 COVID-19 during pregnancy: Women regret not having the vaccine
03:35 US and Haiti demand release of 17 missionaries kidnapped by gang
16:24 It's risky business: Some Capitol Riot defendants give up lawyers
16:21 Kidnapping missionaries are being blamed on gangs with abducted past members
04:08 Officials label the fatal stabbing of a UK lawmaker terrorist act
00:00 The recalculation of unemployment benefit goes back to the Council of...
16:26 Jan. 6 panel sets vote on contempt charges against Bannon
00:00 Already survivor of a crash, an American fisherman survives after being...
13:59 As inflation rises, Social Security benefits get a big boost
BIST
1432.8
GOLD
528.29
USD
9.2130
GPB
12.7498
EUR
10.7426
Breaking News
A study shows that at 30 km/h we pollute more than at 50 km/h: Xavier Bertrand's misinterpretation
Close

At least a dozen people are in critical condition after a car drove into a crowd of people watching a Mardi Gras parade in New Orleans on Saturday night, according to media reports.Vehicle plows into crowd at Mardi Gras parade, seriously injuring about a... 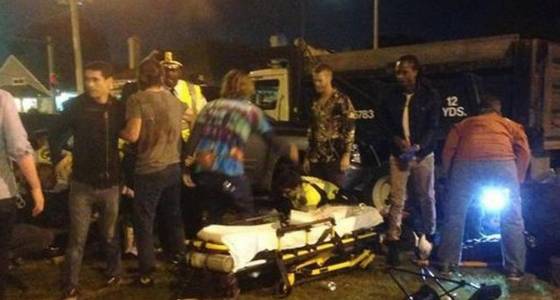 At least a dozen people are in critical condition after a car drove into a crowd of people watching a Mardi Gras parade in New Orleans on Saturday night, according to media reports.

The crash was reported Saturday at about 6:45 p.m. WWL and WVUE report that 21 people have been taken to the hospital and a man has been arrested, who appeared to be intoxicated. The victims include a 3-year-old child and a police officer, per WVUE, though the child is in stable condition.

Seven other people declined medical treatment, according to WWL.

New Orleans Police Department spokeswoman Ambria Washington says that "initial reports show so far that about a dozen people are in critical condition."

Police confirmed in a tweet that they are investigating “a crash where a vehicle ran into a crowd of people.”

NOPD is investigating a crash where a vehicle ran into a crowd of people at the Orleans and Carrollton. #NOPDAlert pic.twitter.com/Ll8YeVI7ru

One woman at the scene told The New Orleans Advocate that a silver truck whisked by her just feet away as she was walking through the intersection.