The Tenkiv Nexus modular renewable energy system can also use the sun's heat to power anything "for 1/13th the cost of existing solar panels and 1/5th the cost of fossil fuels." A startup out of Sacramento, California, recently hit its crowdfunding goal... 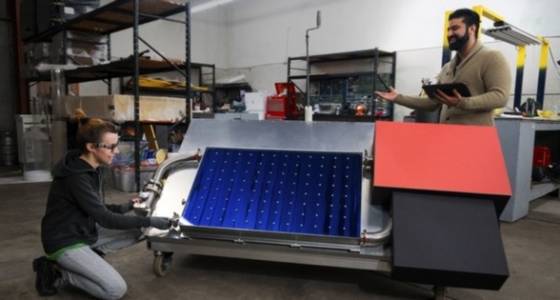 The Tenkiv Nexus modular renewable energy system can also use the sun's heat to power anything "for 1/13th the cost of existing solar panels and 1/5th the cost of fossil fuels."

A startup out of Sacramento, California, recently hit its crowdfunding goal for a unique renewable energy system system that will initially be used for water purification in places such as Asia and Africa, but which can also be used to produce power for other applications as well. Tenkiv's larger goal is to democratize "sustainable water and energy access" with its modular system, which can not only produce enough power from the heat of the sun (solar thermal technology) to purify water at an affordable cost, but which can also be used to store, distribute, and convert solar thermal energy for use in a number of other ways, especially in areas where infrastructure is poor or nonexistent.

Instead of focusing on photovoltaic technology, which is what many solar energy systems use, and which can convert the sun's light into electricity (although at a higher cost and manufacturing complexity), Tenkiv has chosen to build its system around the use of the sun's heat as an energy source. And according to the company, its technology can "power anything for 1/13th the cost of existing solar panels and 1/5th the cost of fossil fuels without any subsidies," which could be a key factor for scaling up the systems to meet the needs of the estimated 1 billion people without regular access to clean water.

One of the arguments that Tenkiv makes in favor of using solar thermal instead of solar photovoltaic technology is the lack of a need to convert the heat energy collected by the system into other forms, such as electricity, which leads to conversion losses along the way.

"Tenkiv Solar Collectors can quickly and efficiently distribute thermal energy harnessed from the sun. It doesn’t matter if you’re heating water for a bath, a cup of tea, or a pack of ramen noodles— all of these tasks require energy. The energy used in most modern systems is sourced from a complex and inefficient daisy chain where it takes power to make power. With the Tenkiv Nexus, we collect the heat directly from the sun without consuming any finite resources. There is no needless conversion between you and your energy." - Tenkiv

Another argument in favor of the Tenkiv Nexus system is that it doesn't seek to completely reinvent water purification, as it employs thermal distillation, not reverse osmosis or filtering, which makes it uniquely suited for water desalination and purification, as it doesn't require clean feed water. The system as a whole also has few moving parts (the thermal panels themselves have none), which means that it should have a long lifespan and low maintenance costs, and because it allows people to use the heat either directly, or to convert it into electricity, it has more flexibility and efficiency than a solar photovoltaic system does.

"By using our proprietary and revolutionary PII Thermal Circuit we have removed the barrier of the high cost for energy that is normally required to eliminate viruses, bacteria and parasites from water using heat sterilization. Tenkiv’s innovative technology provides a practical, affordable way to bring clean water and renewable energy to communities around the world thereby preventing the needless suffering caused by waterborne diseases. The Tenkiv Nexus presents a game changing technology for water purification at a game changing cost." - Tenkiv

The company is also said to be working on an "intelligently-automated building that can generate more power than it uses," with the Tenkiv Nexus system at its core, which could eventually have big implications for both residential and commercial buildings.

"Just as central heating and air fundamentally changed home construction, the Tenkiv Nexus has the power to integrate and localize building automation, energy production, water purification, heating, and cooling. In a Tenkiv Nexus connected community, this decentralized production can be intelligently distributed to ensure there is never an energy shortage, and ensures that surpluses are never wasted." - Tenkiv