Witnesses to his baseball legend make the case for Tim Tebow

PONTE VEDRA BEACH, Fla. — There was a time when Tim Tebow could really hit — and not just on the football field.Back in 2005, when he was a junior outfielder here at Nease High School, just north of St. Augustine, the hulking Tebow came to the plate in... 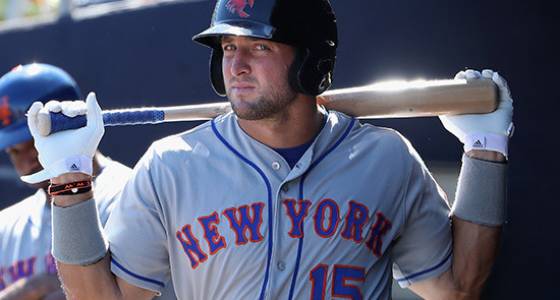 PONTE VEDRA BEACH, Fla. — There was a time when Tim Tebow could really hit — and not just on the football field.

Back in 2005, when he was a junior outfielder here at Nease High School, just north of St. Augustine, the hulking Tebow came to the plate in the District 7-4A championship game to lead off seventh inning against archrival St. Augustine in the Nation’s Oldest City.

Nease trailed, 2-1. Tebow had scored the Panthers’ first run in the second.

On the mound stood sophomore right-hander Brian Beach, who was 6-0 and pitching a terrific game.

The count moved to 1-1. Tebow was looking for a curveball to drive. Beach picks up the story.

“He was a tough out for sure,” Beach told The Post. “A left-handed batter, I had a pretty good record against him, that’s why I faced him in that championship game. It was dirt-top curveball and he just got the better half of it.”

Did he ever, the ball landing deep in the parking lot, a game-tying blast well over 425 feet.

“Everybody knows him as a football player, but I wouldn’t cut him any slack,” Beach said. “Some people might say, coming from football, he hasn’t played a lot of baseball, I might be able to sneak one by him or something that.

More than a decade later, PJ Grall, the St. Augustine baseball coach at the time, is still upset over calling for that curveball, but noted with a laugh, “It might still be going. And Menendez [High, which hosted the game] is not a small park. Once a ball like that gets into orbit, it just keeps orbiting the earth. If it were a plane, it would be a two-movie flight.”

Nease pushed across another run with two outs in the seventh and went on to win, 3-2. After the game Tebow, who played for Nease as a home-schooled student, told the St. Augustine Record: “I probably had some [big hits] in Little League and AAU, but never in high school. But it felt good when I hit it. I was hoping he’d give me a curve down low and I just got a hold of it.”

Tebow, 29, will move into the next phase of his quest with the Mets on Monday in Port St. Lucie as he follows his own Impossible Dream 50 years after the Impossible Dream Red Sox won the AL pennant.

After all, that’s what baseball is all about: impossible dreams. At the least, Tebow is bringing an incredible work ethic onto the field and leadership into the clubhouse for the Mets.

“I never ever would underestimate his talent and his desire, and don’t forget, he has that extra person on his shoulder to help him along,” said Ted Barbato, the Nease athletic director when Tebow led Nease to a state football title as a senior.

“When he goes out onto the field, he plays with such a high level that he brings the players around him to a higher level as well. He is such a motivator,” added Barbato, an AD for 34 years in New Jersey and nine more in Florida. “I’ve had the privilege of seeing a lot of quality athletes and he is a once-in-a-lifetime athlete.

“When we were in the state championship game, the opponent started to run on us, and Tim went to the coaches and said, ‘Put me in at defensive tackle. I’ll stop them.’ He has that hidden power.”

Tim Tebow believes, and those who know him are certain Tebow will at least make this interesting. Corey Pye was the winning pitcher for Nease when it beat St. Augustine for the district title and is now an assistant coach at Tallahassee Community College. Pye and Tebow would drive home from school together.

“Baseball was always Tim’s passion,” Pye said. “He lives his life with no regrets.”

“I played him in football too, I was a safety,” Beach said as he stood behind the concrete counter of his family’s marina. “You hear his name, he was All-World, but we beat him every year in football.

Bryan Hinman, a longtime area baseball coach and the former coach at St. Joseph Academy, said, “Tebow came here with the greatest expectations in the world on his shoulders as a high-school athlete, and he delivered.”

Matt McCool, the current AD at Nease, was coaching at nearby Palatka when Tebow was playing at Nease.

“The energy he exerts in everything that he does, makes him who he is,’’ McCool said. “When you are as talented as he is and as driven as he is, I’m not gonna say he can’t do it. He never accepted no, and that’s what makes champions in all walks of life special.”

Grall also faced off against Tebow on the football field; he was the defensive backs coach for St. Augustine High.

Tebow won two national championships at Florida and the Heisman, but never beat the Yellow Jackets in football.

“Preparing for him was difficult, we could never get a scout-team guy to throw it like him, so I remember I used to try to be the scout guy, he was such a hard kid to defend,” Grall said. “I’m rooting for him. It’s like when [Michael] Jordan tried baseball. No one was bashing Jordan. Jordan was beloved. From everything I’ve seen with Tim, everything he talks, he walks. At times people are looking for chinks in that armor and I’ve never seen it.

“If he went directly into baseball, he would have had a chance, and that’s not to say he can’t still do it.’’

The challenge is mighty. High school was such a long time ago. But Tebow is prepared. Whether he succeeds or fails, his approach has not changed.

Just like on that May day back in 2005, Tim Tebow will be looking for a pitch to drive.