INDIANAPOLIS — Alshon Jeffery is eager to test free agency, to gauge his market value and assess where he'd like to play going forward. The Bears are granting Jeffery that wish, opting not to use the franchise tag on their top receiver for a second straight... 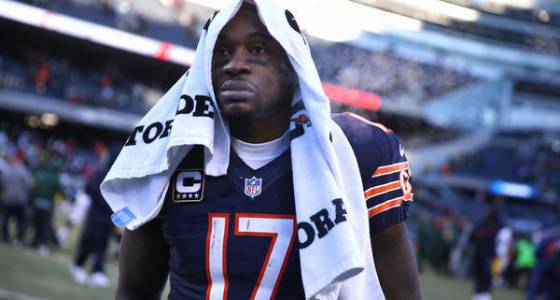 INDIANAPOLIS — Alshon Jeffery is eager to test free agency, to gauge his market value and assess where he'd like to play going forward. The Bears are granting Jeffery that wish, opting not to use the franchise tag on their top receiver for a second straight season. But that doesn't mean the two sides are at an impasse. In a situation general manager Ryan Pace repeatedly described as "fluid" Wednesday, the Bears are hopeful they can be active in negotiations with Jeffery. But only if it's at a price they deem reasonable.

"Sometimes it's necessary to kind of test the market to determine that player's value," Pace said from the NFL scouting combine. "And that's really where we're at. He's a good player and we'll see how it plays out. But I think there are certain instances where testing the market is a necessary part of the process."

Officially, other teams can begin negotiating with Jeffery at 11 a.m. on Tuesday with no contracts to be signed until March 9. Jeffery will be the top receiver available when the free-agent market opens. But at what cost?

The answer to that question will become clearer this week at the combine as teams and agents begin to feel each other out. Then the Bears will have to endure a stressful waiting game as the market sets.

It's a risky play given the team's lack of star power and quality depth behind Jeffery at receiver. But Pace expressed optimism that the Bears could find a suitable contingency plan in the event Jeffery lands a deal elsewhere.

Over five seasons in Chicago, Jeffery has averaged 61 catches, 910 yards and five touchdowns. During a breakout 2013 season, he exploded for 89 grabs, 1,421 yards and seven scores, showcasing his big-play ability and penchant for making contested catches. But Jeffery has missed 11 games over the last two seasons – seven because of injuries and four because of last season's performance-enhancing-drugs suspension — raising questions about his dependability.

"When he's been out there, I think it's been positive," Bears coach John Fox said. "Really it's just been that consistency of him being out there. So I'll say it's a partial evaluation and one we'll continue evaluating moving forward."

Money, of course, will be a big factor — if not the biggest — in whatever decision Jeffery makes next week. But a potential return to Chicago is also clouded by the Bears' uncertain situation at quarterback, one unlikely to be resolved before next week. Furthermore, the Bears haven't made the playoffs in any of Jeffery's five seasons. So it may also be difficult to convince the competitive receiver that his best chance of winning will come by staying put.

Asked Wednesday what the Bears could sell Jeffery on as he weighs his options, Fox nodded.

"Well, I'd say he knows us better than anybody else he could potentially go to. I think that's a positive feeling," Fox said.

"Typically with these things (though), it comes down to the market value. It's like walking into a store right now at this time of year and there are no price tags. We'll kind of develop that moving forward. My experience has been that's a very fluid process."