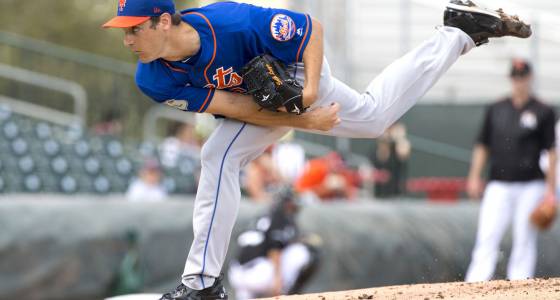 “My location was better — I was putting [curveballs] in the dirt when I wanted to, throwing strikes when I wanted to,” said Lugo, who pitched two scoreless innings against the Red Sox on Friday. “That is probably the best I have thrown it in a long time.”

Lugo is expected to make one more appearance for the Mets in the Grapefruit League before leaving to pitch for Puerto Rico in the World Baseball Classic.

Lugo is under consideration for a spot on the major league staff, but also could begin the season at Triple-A Las Vegas as rotation insurance.

Lucas Duda indicated he was showing no improvement from the previous day, when he was limited to defensive drills. Duda recently received a cortisone injection in both hips for what he termed as back spasms and hasn’t taken swings since late last week.

Noah Syndergaard is scheduled to start Friday, as the Mets begin unveiling their marquee pitchers. Jacob deGrom, Matt Harvey and Steven Matz will follow Syndergaard in the Grapefruit League rotation. Collins is hopeful Zack Wheeler can take a turn later next week.

The Mets may consider using Tim Tebow in a Grapefruit League game as early as next week.

There are split-squad games on Wednesday and Friday of next week, with several players leaving for the WBC, perhaps providing an opening for Tebow, who has been assigned to the team’s minor league camp.

Travis d’Arnaud and T.J. Rivera each homered in the second inning of the Mets’ victory.

Top prospect Amed Rosario was charged with a throwing error after entering the game for Jose Reyes.

Michael Conforto made a diving catch in right field and strong throw to the plate to nail J.T. Realmuto, ending the second inning.

Marcos Molina, Corey Taylor and Fernando Salas are among the scheduled pitchers in Jupiter against the Cardinals.