UNC mascot Jason Ray died 10 years ago, but his parents assure his spirit lives on

Ten years ago, the phone call that every parent dreads rang in the house Charlotte and Emmitt Ray.Their son Jason Ray – a charismatic senior at the University of North Carolina who had played Rameses, the Tar Heels mascot, for three years at UNC sporting... 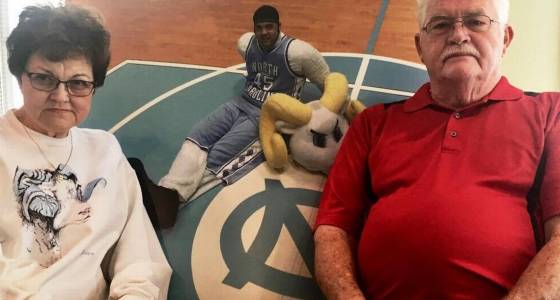 Ten years ago, the phone call that every parent dreads rang in the house Charlotte and Emmitt Ray.

Their son Jason Ray – a charismatic senior at the University of North Carolina who had played Rameses, the Tar Heels mascot, for three years at UNC sporting events – had been struck by a car in New Jersey.

Jason had been walking along the shoulder of a highway, on his way to buy a burrito and soda at a nearby convenience store before donning the Rameses costume again for UNC for a 2007 NCAA men’s basketball tournament game. Then he got hit.

The voice on the other end of the phone told the Rays that they had to get to New Jersey fast, and that their son was on the verge of dying.

That ultimately fatal accident changed the Ray family forever. And because 21-year-old Jason Ray was an organ donor, as indicated by the red heart on his North Carolina driver’s license, his death also helped save or improve the lives of more than 60 other families.

Rather than push that horrible accident deeply into their past, the Rays have tried to use it for good. For the past 10 years, they have remembered Jason – both for the big life that he lived and for the way he has lived on in the bodies of others.

“You have to come to terms with all of it whether you like it or not,” said Emmitt Ray, Jason’s father. “But it’s always there. It’s always on your mind.”

You have to come to terms with all of it whether you like it or not. But it’s always there. It’s always on your mind.

The Jason Ray Foundation’s charity golf tournament – to be held in Kannapolis at The Club at Irish Creek on April 3 and in need of more entrants – is only the latest of the many fund-raising efforts that Jason’s parents have spearheaded.

The annual golf tournament has moved back near Jason’s Concord hometown this year after spending the past several years in Chapel Hill. It raises money for the UNC Hospital’s Transplant Clinic, which was renamed in Jason Ray’s honor in 2016.

Those who benefit from The Jason Ray Foundation are often families in need of an organ who have exhausted all of their financial resources and have trouble paying for things as simple as the gas needed to go to and from the hospital. The foundation has raised $400,000 during its existence; the Rays have a goal of $1 million.

The Rays never expected to be championing organ donation. They were not originally signed up to be organ donors themselves, which is common. Approximately 52 percent of North Carolinians with driver’s licenses have signed up to be donors and have the accompanying red heart on their license.

But when Jason Ray turned 18 and got his N.C. adult license in 2003, he had taken it upon himself to register as an organ donor. As Charlotte Ray remembers it, he came into their house while she was paying bills, slapped his license on the table and asked her to look at it. She remembers the rest of the conversation this way.

“Not the picture, Mother,” Jason said. “Look again. See that red heart? Do you know that means I don’t want you to bury me with anything that could help somebody else?”

“No, Mother,” Jason said, opening the refrigerator and looking for something to eat. “And it’s my decision. Not yours.”

Charlotte Ray said she agreed so easily back then because of one overriding thought.

“I figured I’d be dead and gone long before Jason,” she said. “He could do anything he wanted to do, because I wouldn’t have to go through it. But here I am – I’ve been going through it every day.”

She doesn’t mind talking about her son, though. Far from it.

“He’s all I want to talk about a lot of times,” she said.

The Rays married and had Jason late in their lives. They already had three sons between them from earlier marriages. Jason was their only child together, and he tried to fully immerse himself in everything he did.

Both passionate and compassionate, the 6-foot-5, 220-pound Ray would turn out to be an ideal Rameses. The mascot costume has huge yellow horns, and Jason himself liked to grab life by the horns and shake it for all it was worth.

He wanted to know more about history and adventure, so he ran with the bulls in Pamplona and visited the Sistine Chapel. He wanted to be an alternative rock star, and so he and his buddies formed a band with him as the lead singer. They called it “9 PM Traffic,” because originally they started the band while Jason was going to Jay M. Robinson High in Concord. Rehearsals had to end at 9 p.m. then so everyone could go home and do their homework.

Jason wanted to know more about God, so he questioned his pastors and Sunday School teachers relentlessly and ran a Bible study for seniors at Chapel Hill.

“I thought he meant college seniors when he told us that,” Charlotte Ray said. “He meant actual seniors – older people.”

Jason wasn’t a saint. He smoked an occasional cigar, kept careful notes on what beers he liked most and loved to pull off pranks involving firecrackers. But he was a good student who already had a job lined up and was set to graduate from Chapel Hill in May of 2007 with a business degree.

The trip to New Jersey would have been the last time Jason actually played Rameses – the Tar Heels ended up losing in an Elite Eight game to Georgetown on March 25, 2007, while Ray lingered between life and death in that New Jersey hospital. By then carloads of people were arriving from Chapel Hill to keep a vigil in the waiting room – friends from Jason’s church, from his band, from college, as well as his current girlfriend and his old girlfriend.

Charlotte Ray had never told Emmitt Ray about the conversation she had with Jason that night in the kitchen, and Emmitt did not know about the tiny red heart on Jason’s license. While Jason was still alive – although showing no brain activity – Emmitt was first asked by a transplant nurse in New Jersey if he would consent to have Jason’s organs donated to others.

“I about had a hemorrhage right there,” Emmitt said. “I thought, ‘Why in the hell are you talking to me about his organs? The kid is laying down there. I’m wanting him to get well, and you’re talking about using his organs?’”

Emmitt stormed out of the room, but was later calmed down by Charlotte and told of Jason’s wish. Jason would die the next day. Emmitt and Charlotte have since become organ donors themselves. They also worked with others to get a beautiful documentary that ESPN produced about their family’s story called “Ray of Hope” shown to almost every driver’s education class in North Carolina.

The gifts that Jason’s organs gave to others bought them time – some more than others. All of the major-organ recipients came from New Jersey, since that is where Jason died.

The Rays, who are in their early 70s, have fallen out of touch with some of the families who were organ recipients. But they keep an active correspondence up with one man who received Jason’s pancreas and one of his kidneys. And one other man, from California, received some of Jason’s tissue that helped him recover from a serious back injury. That man once flew from California to New Jersey, where the Rays were attending a function, specifically so he could dance with Charlotte.

“It’s nice to know that these pieces of Jason are still helping people,” Charlotte Ray said.

It’s nice to know that these pieces of Jason are still helping people.

As for the people in the car who hit Jason 10 years ago in New Jersey, they were a father and son named Gagik and Armen Hovsepyan. While it was unclear who was driving the car – originally father Gagik said he was, but authorities later alleged that Armen was driving with a suspended license – they were not originally charged with a crime for the accident. Although authorities would later charge them with lying to police, Observer research indicates that neither served any jail time.

As for the Rays, they have three grandchildren and one great grandchild. Emmitt is retired from IBM, where he was an engineering manager. Charlotte works as a substitute teacher for elementary schools in Cabarrus County and for Weight Watchers.

They still live in the same house in Concord where Jason grew up, and there are pictures and reminders of their son throughout the home. Jason is buried in a small town in Kentucky, the state where the families of both Charlotte and Emmitt Ray are from.

Ronald Griffin, a 58-year-old former postal worker who received Jason’s heart, lived for four more years after his 2007 transplant. The Griffin and Ray families became close, sometimes traveling together when Ronald was well enough to do that to tell their story together.

“Ronald’s wife, Stephanie, would send us a $50 money order every month for the Jason Ray Foundation while her husband was alive,” Charlotte Ray said. “Ronald has been dead six years now. But every month, that $50 money order from Stephanie still comes in the mail. She is grateful for those four extra years they were able to have with Jason’s heart. And so are we.”

The Jason Ray Foundation golf tournament will be held on Monday, April 3, at The Club at Irish Creek in Kannapolis. You can register for the tournament online -- or give a gift online to support the cause of organ donation -- at jasonray.org. Call 704-782-6752 for more information.