TORONTO -- The Portland Trail Blazers' late comeback attempt came up short on Sunday at the American Airlines Centre, as they lost 112-106 to the Toronto Raptors. The Blazers built a double-digit first half lead, but a could spell to close the second quarter... 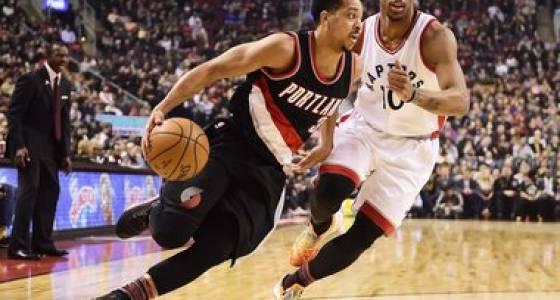 TORONTO -- The Portland Trail Blazers' late comeback attempt came up short on Sunday at the American Airlines Centre, as they lost 112-106 to the Toronto Raptors.

The Blazers built a double-digit first half lead, but a could spell to close the second quarter let Toronto get back into the game. The Raptors created some distance early in the fourth quarter, stretching their advantage to as much as nine points, before holding of the Blazers' late push.

It was over when: The Blazers needed one last stop to keep their comeback hopes alive, trailing 109-104 with 43 seconds remaining. Portland trapped Raptors star DeMar DeRozan near half court, but he got the ball back worked his way to the free throw line, pump-faking before drawing a shooting foul on AL-Farouq Aminu. DeRozan, who hit all 14 of his free throw attempts, nailed both shots at the line to put Toronto up seven with 30 seconds left.

Top performers: DeRozan finished with 33 points and six rebounds to lead the Raptors, who also got 18 points and 10 rebounds from Serge Ibaka. Damian Lillard led the Blazers with 28 points, six rebounds and eight assists. Moe Harkless added 18 points for Portland.

Turning point: The Raptors outscored the Blazers 15-2 over the final 4:16 of the first half to take one-point lead into the break. Toronto then scored the first six points of the third quarter, building a 59-52 lead. Portland went 6:46 of game time between field goals before Moe Harkless' putback finally ended the drought. Portland took a brief one-point lead late in the third quarter and hung in the game until the final minute, but never regained full control after the long stretch without a field goal.

Trend tracker: The Blazers have not won consecutive road games since Nov. 4 and 6 at Memphis and Dallas, the sixth and seventh games of the season. Portland dropped to 10-21 on the road this season, guaranteeing they will have a losing record away from the Moda Center.

Injury: Jusuf Nurkic took an elbow to the face from Toronto forward PJ Tucker while battling for a rebound with 6:15 left in the fourth quarter. Nurkic, who was called for a personal foul on the play, had two false teeth knocked out of his mouth. He remained on the ground momentarily but did not come out of the game, getting up to hand his teeth to team trainer Geoff Clark before play resumed. Tucker was assessed a technical foul for the errant elbow.

The Blazers wrap up their three-game trip at the Detroit Pistons on Tuesday at the Palace of Auburn Hills at 4:30 p.m.