I admit it ... ranking fantasy rookies before the NFL draft is often an exercise in futility. How can you possibly forecast a player's full value before we know what team he's on? Case in point, let's look back at last season's class of running backs.... 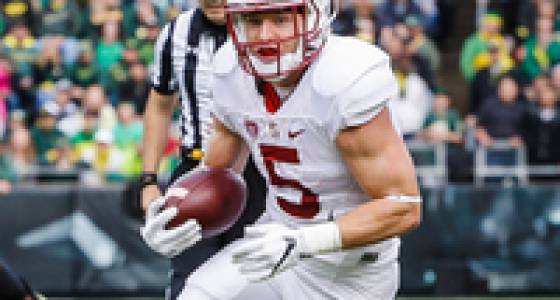 I admit it ... ranking fantasy rookies before the NFL draft is often an exercise in futility. How can you possibly forecast a player's full value before we know what team he's on? Case in point, let's look back at last season's class of running backs. Heisman winner Derrick Henry was considered the top player at the position, but he ended up with the Tennessee Titans and behind DeMarco Murray. He would finish 39th in fantasy points among runners, which made him an occasional flex option at best.

Now, let's ask a hypothetical question. What would have happened to Henry had he ended up with a team like the Chicago Bears instead? There's a good chance we're talking about him being a potential first-round pick in 2017 fantasy drafts, and not Jordan Howard. This doesn't mean you shouldn't know the names to watch in the NFL draft, because we see rookies make an immediate fantasy impact all the time. That's why I'm giving you my top 20 rookies you should have your eye on later this month in Philadelphia.

You won't see a quarterback on the list, because I don't see Clemson's Deshaun Watson, North Carolina's Mitch Trubisky, Notre Dame's DeShone Kizer or Texas Tech's Pat Mahomes II as draftable fantasy assets in seasonal leagues regardless of the team that calls their name in the draft. What you will see is a lot of running backs and wide receivers, which are the two most important skill positions in fantasy football. I can also tell you this ... the list could look a whole lot different after April 27-29.

1. Leonard Fournette, RB, LSU: Fournette has been compared to the likes of Adrian Peterson and Marshawn Lynch (among other big, strong backs) for his running style and skill set, and he'll be one of the first rookies picked in all seasonal and dynasty drafts regardless of the team that drafts him. The Carolina Panthers, Jacksonville Jaguars and New York Jets have all been mentioned as potential spots, but he looks to be projected as a real workhorse at the NFL level wherever he lands.

2. Dalvin Cook, RB, Florida State: Cook could wind up as the first rookie picked in fantasy drafts if he ends up in the right situation. A potential three-down runner at the NFL level, he's been compared to former fantasy superstar Edgerrin James. Ironic, because the Indianapolis Colts would be one of the preferred fantasy landing spots with Frank Gore now at the end of his career. The Panthers, New York Giants and Kansas City Chiefs are also possible spots for the talented Florida State product.

3. Mike Williams, WR, Clemson: Williams has everything you want in a wide receiver prospect in terms of height (6-foot-4), weight (218 pounds) and speed, so he's likely to be a top-15 overall selection in the NFL draft. The Clemson product, who has drawn comparisons to the likes of fantasy superstars Dez Bryant and Mike Evans, has been linked to the Arizona Cardinals, Buffalo Bills and Tennessee Titans. Williams will be a top-ranked dynasty league player wherever he lands in the draft.

4. Christian McCaffrey, RB, Stanford: McCaffrey's stock has soared since the NFL Scouting Combine to the point where some experts now have him projected as a top-10 overall pick in the upcoming draft. A collegiate "running back" by position who also has the skills to become a top-notch pass catcher and return man in the pros, McCaffrey's PPR potential is obvious. The Panthers, Denver Broncos and Tampa Bay Buccaneers have been linked, but the New Orleans Saints would be a dream fantasy spot.

5. Corey Davis, WR, Western Michigan: Davis is considered one of the two best wide receiver prospects in the 2017 class (along with Williams), and for good reason. A touchdown machine at the collegiate ranks, Davis is a crisp route runner who will be a starter at the next level sooner than later. He's been linked to the Bills, Cardinals and Titans in some mock drafts, though the Cleveland Browns and Baltimore Ravens would also be potential landing spots. Davis is a first-round dynasty pick.

6. Joe Mixon, RB, Oklahoma: Mixon is one of the most talented running backs in the 2017 class (some would argue a first-round talent), but his off-the-field troubles are a real cause for concern among NFL franchises. Whether or not he ultimately moves into the end of Round 1 remains to be seen, but Mixon has been linked to the Broncos, Buccaneers, Green Bay Packers and Oakland Raiders. He's a running back to monitor, and he could move up fantasy draft boards if he lands with the right team.

7. John Ross, WR, Washington: Speed! Ross ran a 4.22 40-time at the combine, which is the fastest time ever recorded and made him that much more attractive for NFL teams. He's not a big dude at 5-foot-11 and 188 pounds, but Ross has drawn some comparisons to DeSean Jackson and Will Fuller due to his size and overall skill set. The speedster has been linked to the Cardinals, Ravens and Titans and should be a top-20 overall pick in the first round. He's also likely to be a top-10 dynasty selection.

8. O.J. Howard, TE, Alabama: Howard didn't put up monster totals in his final collegiate season, but he's the best tight end in this class due to his combination of size, speed and upside in the pros. He also improved himself as a blocker, which makes him that much more attractive to NFL teams in the draft. A unique talent, Howard will be high on the draft boards of the Browns and Jets in Round 1. He'll be worth more of a late-round pick in seasonal fantasy drafts, but his dynasty stock is high.

9. Alvin Kamara, RB, Tennessee: Kamara could be this season's version of Jordan Howard, at least in the world of fantasy football. A tremendous playmaker in college for the Volunteers, he averaged over six yards per attempt and scored 16 rushing touchdowns during his two seasons with the school. While he won't be a first-rounder in the NFL draft, Kamara has drawn comparisons to the likes of Jamaal Charles. High praise. He's been linked to the Packers, Buccaneers, Raiders and Philadelphia Eagles.

10. Samaje Perine, RB, Oklahoma: Perine, who split the backfield work with Mixon at Oklahoma, is an absolute physical beast who has drawn comparisons to former fantasy superstar Michael Turner. In fact, he outbenched every single running back and almost every offensive lineman at the combine. Perine might not come off the board in the first two days, but a team like the Packers or Eagles could be a good fit for his long-term fantasy prospects. He's a player for owners to monitor.

Michael Fabiano is an award-winning fantasy football analyst on NFL.com and NFL Network and a member of the Fantasy Sports Writers Association (FSWA) Hall of Fame. Have a burning question on anything fantasy related? Tweet it to @Michael_Fabiano or send a question via Facebook!