Galleries Videos CONTACT ADVERTISE
Famagusta 16°
clear sky
BUSINESS EDUCATION ENTERTAINMENT HEALTH POLITICS SCIENCE SPORTS TECHNOLOGY
10:58 Kratom Tea: How Is It?
11:46 Office Furniture Products for you!
12:17 Top Clubs, Their Value, Revenue And Current Standings
11:14 Reasons Why Rewarding Yourself is a Good Practice
10:56 What Egypt Has to Offer for US Travelers
12:48 How to Maximize Compensation in Your Personal Injury Case
12:28 How To Use a CBD Vape Pen for Anxiety
05:28 Second-Hand Vaping Is Harmless
05:15 Guide to Vaping and CBD Flower for Beginners
14:55 COVID-19 Recovered Ronaldo and Zlatan outshining everyone in Serie A
BIST
1325
GOLD
462.397
USD
7.8681
GPB
10.5074
EUR
9.5144
Breaking News
Tips & Trick To Buying Jewelry Items Without Spending Much
Close

Surging Lightning are leaning in

Say you're Tampa Bay Lightning GM Steve Yzerman. Your team is playing its best hockey of the season and trying to stay in the playoff race, and it is six days until the trade deadline. What do you do?The Lightning head into Thursday night's home game against... 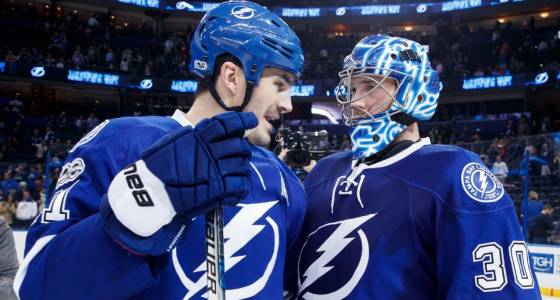 Say you're Tampa Bay Lightning GM Steve Yzerman. Your team is playing its best hockey of the season and trying to stay in the playoff race, and it is six days until the trade deadline. What do you do?

The Lightning head into Thursday night's home game against the Calgary Flames four points out of a wild-card spot and just five points shy of the No. 3 position in the wide-open Atlantic Division. Making up that ground is still a daunting task given all the other teams in the race, but it's also doable, because Tampa Bay has 23 games left.

The Bolts have earned points in seven consecutive games (5-0-2) as they've crept back into the playoff race.

"We've got to win a lot of games, but it's encouraging; it's exciting for everybody," Yzerman told ESPN.com on Thursday morning. "Now it's like we're playing in the playoffs. Every game is crucial."

Every game also influences potential decisions on the team's pending unrestricted free agents, including Ben Bishop and Brian Boyle -- and perhaps other trade scenarios. Mind you, the Lightning have only two games left before Wednesday's deadline. But I'm guessing they'll wait until after they host the Ottawa Senators on Monday to decide once and for all what they're doing with Bishop and Boyle. The latter, a beast of a No. 3 center with a cap-friendly number ($2 million) that other teams could easily digest, would no question be a coveted target.

But what if Tampa Bay wins its next two games? Should Yzerman hold on to Bishop and Boyle and commit fully to making a run this season? Or should it simply depend on the quality of the offers he received for them? It is indeed a tough call.

"If they suddenly decided to sell, they would have parts a lot of us would want to look at," a Western Conference team executive said this week. "But if they make the playoffs, with Steven Stamkos eventually back in the lineup, that's a team I wouldn't want to play. No way."

Stamkos has been out since November with a lateral meniscus tear that required surgery.

The Lightning might be willing to look at other trades that have nothing to do with their place in the standings. They have delicate salary-cap decisions to make this offseason. Tyler Johnson, Ondrej Palat and Jonathan Drouin all need new contracts, and Victor Hedman's eight-year, $63 million contract will kick in. Tampa Bay will have to trade a player or two off its roster this summer to make room.

But if another team makes a creative offer over the next week, the Bolts could also look to start making headway in clearing cap space now, too -- although I'd bet more that the offseason is the time for that.

In the meantime, Ryan Callahan's second hip surgery means he's out for the regular season, but his absence also has opened up an extra $5.8 million under the cap if Tampa Bay needs it. The only way I see that being the case is if the Lightning somehow find their unicorn: a legit top-four defenseman who is signed past this season.

The Florida Panthers finally lost a game on Wednesday -- after winning five in a row -- but are still knocking on the door of a playoff spot. They could suddenly find themselves as cautious buyers over the next week. Given the big contracts that will kick in next season for Aaron Ekblad, Jonathan Huberdeau and Reilly Smith, the Panthers are more focused on a rental so as not to jam up next season's cap situation. If Florida adds a player, look for it to be a top-nine forward.

Vancouver Canucks winger Jannik Hansen has another year left on his deal at $2.5 million, which makes him a more desirable target in the eyes of some teams, given his versatility and ability to play up and down a lineup. But the Canucks value Hansen, too. To move him, Vancouver would have to be offered a good prospect in return. Just a draft pick might not do it. And again, it could just keep him. Editor's Picks

Who are the best players believed to be available at the NHL trade deadline? Here's our list of the top 20, led by Avalanche center Matt Duchene.

Defensemen are in demand as the trade deadline approaches. Pierre LeBrun plays matchmaker and pairs up six blueliners -- including Philadelphia's Mark Streit -- with a deserving suitor.

The Detroit Red Wings are not shopping defenseman Mike Green and have no plans to deal him. But given where they are in the grand scheme of things, they also can't afford not to listen if a team calls with a serious offer. The 31-year-old, right-handed puck mover has another year on his deal, at $6 million, and he's been good for Detroit this season. I would think that the price to get him would have to supersede whatever St. Louis gets for pending unrestricted free agent Kevin Shattenkirk -- if only because Green (who has a full no-trade clause) is signed past this season. The Red Wings plan on having Green back next season, but the point here is this: They owe it to themselves to at least listen over the next week.

I reported earlier that the Pittsburgh Penguins and Dallas Stars had touched base regarding Marc-Andre Fleury, but at this point I'd be surprised if Dallas bothers to figure out its goaltending before the deadline. It makes more sense for the Stars to wait until the offseason, when a fairly large goaltending market will open up -- led potentially by the likes of Fleury, Bishop, Scott Darling and a host of others.

There had been talk earlier this season that the San Jose Sharks would find a more veteran netminder to back up Martin Jones. But I believe that the performance of Aaron Dell, 27 -- he of the .934 save percentage -- has given San Jose enough evidence to stick with him as its No. 2, and I don't expect any movement there before Wednesday's deadline.