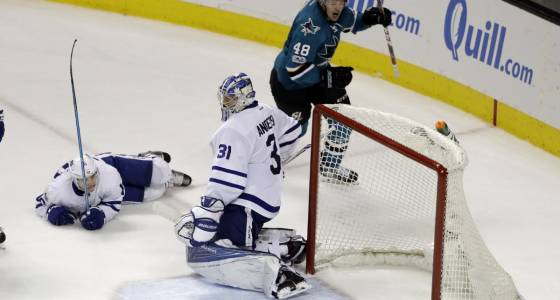 The penalty kill. The faceoff circle. Possibly in front of the net on the power play.

“It won’t be a problem for him getting ice time,” Babcock said before Tuesday’s 3-1 loss to the Sharks.

Babcock, in saying that, also described another couple of bits of upside. Along with providing a vote of confidence to a young team making a playoff push, the arrival of Boyle, the 32-year-old veteran of 100 playoff games, promised to ramp up in-house competition within the Maple Leafs dressing room.

“The more good players you have, the more internal pressure you get from one another, because you’ve got guys to take jobs. I think that’s a real positive thing on a good group,” Babcock said. “And it leads to internal accountability, which you need to have success.”

Boyle, plucked Monday from the Tampa Bay Lightning for a 2017 second-round pick and Byron Froese, missed the morning skate but arrived in time for the opening faceoff, which he won.

But the Maple Leafs couldn’t translate the jolt of energy that accompanied his arrival into a victory. Failing to get a point for the first time in five games, the Leafs entered the final two minutes of regulation tied 1-1. But Patrick Marleau set up the game-winner on a late-game rush, drawing three Toronto defenders before feeding Tomas Hertl, who used the time and space to beat Frederik Andersen with a short-side bullet. Joe Pavelski scored on an empty net to ice it.

On a day when internal competition within the team saw Frederik Gauthier, Boyle’s predecessor as the fourth-line centre, shipped to the AHL Marlies, the remaining Maple Leafs didn’t seem interested in external competition in the early going. Outshot 13-5 in the opening frame, they were bailed out by the solid goaltending of Andersen before they found their footing on a dodgy SAP Center surface that produced many a bouncing puck.

Not that the players were unmarred by their own imperfections. San Jose defenceman Brent Burns came into the game as a favourite to win the Norris Trophy. But his ridiculous gamble on a mid-second-period penalty kill — a whiffed hip check that allowed its intended target, William Nylander, to enter the zone with speed — set the stage for the Auston Matthews goal that gave the Leafs a 1-0 lead.

The Sharks tied it a few minutes later on a Brenden Dillon slapper from in close, this after Leo Komarov’s abdicated his defensive responsibility to roam low.

The game also saw the return to action of Leaf forward Mitch Marner, who missed the previous five contests with a shoulder injury, and Tyler Bozak, who missed Saturday’s loss to the Canadiens with an infected cut in his right hand.

Matt Martin, who played on Boyle’s wing on Tuesday, acknowledged the reality of progress.

“To get into the league, the bottom line is you’ve got to take somebody else’s job. We’re all teammates. We’re all friends in here. And we all care about each other. But at the end of the day, to get in the lineup, someone has to come out,” Martin said. “There is that internal competition. And I think it drives people to be better.”