PALM BEACH GARDENS, Fla. — Rickie Fowler made it interesting Sunday for as long as it took him to make two big putts to pull away in the Honda Classic.Staked to a four-shot lead, Fowler hit one putt into a sprinkler hole, hit a tee shot into the water... 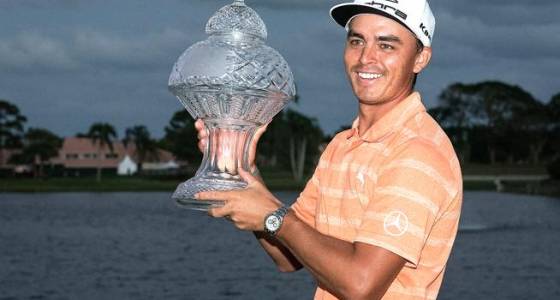 PALM BEACH GARDENS, Fla. — Rickie Fowler made it interesting Sunday for as long as it took him to make two big putts to pull away in the Honda Classic.

Staked to a four-shot lead, Fowler hit one putt into a sprinkler hole, hit a tee shot into the water and watched a big lead shrink to one over Gary Woodland early on the back nine. Fowler answered with consecutive birdie putts of 40 and 25 feet and closed with a 1-over 71 for a four-shot victory.

"If I don't make those putts, I've got a pretty tight race," Fowler said.

Instead, those chasing him had the biggest problems with the closing stretch at PGA National.

Fowler effectively ended it with a shot over the water to within 3 feet that stretched his lead to five shots with two holes to play. Woodland appeared to have second place wrapped up until he three-putted the 17th, and then tried to lay up on the par-5 18th and came up short into the water. He closed with another bogey for a 69. He had to share second place — the difference of $128,000 — with Morgan Hoffmann, who missed a 4-foot birdie putt on the 18th and settled for a 68.

Fowler hit his tee shot into the water on the 17th hole and made bogey, then hit a wedge into the bunker on the 18th and closed with another bogey to finish at 12-under 268. He had gone 13 months and 25 starts worldwide without a victory. It was his first PGA Tour victory since the Deutsche Bank Championship in September 2015.

CHONBURI, Thailand — Amy Yang won the Thailand LPGA for the second time in three years, finishing with a 4-under 68 for a five-stroke victory.

Yang played the final five holes of the third round Sunday morning, completing a 65 to take a five-stroke advantage into the final round. The South Korean player has three LPGA Tour victories.

South Korea's So Yeon Ryu was second after a 68.

JOHANNESBURG — South Africa's Darren Fichardt won the rain-shortened Joburg Open, closing with a 4-under 68 for a one-stroke victory over Wales' Stuart Manley and England's Paul Waring.

Fichardt rebounded from a bogey on 17 with a birdie on 18 to finish at 15 under at Royal Johannesburg and Kensington Golf Club. Manley shot a 67, and Waring had a 69.

The top three earned spots in the British Open.