Famagusta 4°
clear sky
BUSINESS EDUCATION ENTERTAINMENT HEALTH POLITICS SCIENCE SPORTS TECHNOLOGY
10:22 Four Benefits of Hiring a Dedicated Development Team
04:48 Mark Kelly, President of Safety Marking Inc., Discusses Structuring Effective...
17:58 Trump wants to play golf at the Biden swearing-in in Scotland - but is...
17:54 First doubts Regarding tightened Steps: two National Countries Extract...
10:39 Covid-19 : in France, the end of containment and entry into force of the...
04:34 The schools of Rome will use the Internet with light bulbs: what it is...
10:58 Kratom Tea: How Is It?
11:46 Office Furniture Products for you!
12:17 Top Clubs, Their Value, Revenue And Current Standings
11:14 Reasons Why Rewarding Yourself is a Good Practice
BIST
1552
GOLD
443.046
USD
7.3665
GPB
10.1213
EUR
8.9421
Breaking News
Planning to quit smoking? Vaping can be a great alternative!
Close 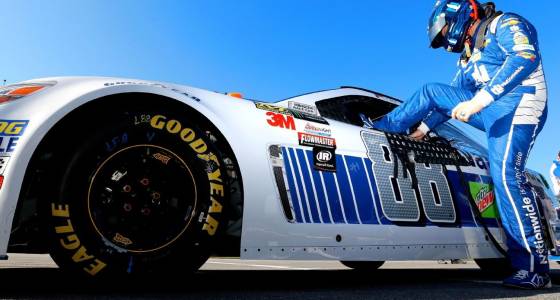 The son of the seven-time NASCAR Cup champion didn't ask for much of this role, nor has he campaigned for it. But he can't ignore that his decision to return to racing after missing 18 races last year because of a concussion has ramifications that go beyond his home.

No disrespect to the recently retired Carl Edwards. He has his fans who will miss him and likely won't show up to races now that he's gone. But even Earnhardt's short span off the track caused sponsor Nationwide to see softening in its return on investment, and track owner International Speedway Corp. cited his absence as a reason for its 2016 attendance woes.

So when Earnhardt rolls off Sunday for the Daytona 500, the industry will celebrate it as an accomplishment of a race car driver and also with a huge selfish deep breath that the sport is whole again.

"I talked unintentionally to Carl about this [three weeks ago] at Phoenix," Earnhardt said. "He said, 'Man it was a real easy decision to make when I didn't worry about anyone else's opinion or worry about how it affected anyone else. When I thought about just me, it was so easy to make the decision that I wanted to make.'

"That's the hard part for me. There are so many moving parts to what we have going on. There's a lot of elements, and it's not an easy decision to say when is the time to hang it up."

Earnhardt denies outside influences made the decision for him. He said that he had to decide for himself if he wanted to drive anymore. His doctor asked him constantly about his desire to continue to race.

At 42 years old, Earnhardt could have called it a career, and no one would have looked at him any differently. He admits he almost did as he battled eyesight and balance issues. He primarily worried that the inability to focus on an object -- a street sign would move around as he sat in a car and rode -- would haunt him the rest of his life.

Back in November, Earnhardt went hunting with Martin Truex Jr., and on those trips, Earnhardt would have Truex do the same exercises he had to do as part of his rehab. Truex could do them with no problem. Earnhardt still had issues.

"I [initially] couldn't put one foot in front of the other without falling over like a drunk-driving test," Earnhardt said. "I couldn't take one step without having to step to the right or step to the left to catch myself.

"When we went hunting in November, ... I was getting better at that and so I made Truex do it with me so I could judge me off him. And I was like: That's how much further I still have to go and get to -- I get about six steps in and stumble off to the side."

Seeing that made it real for Truex, who drove for Earnhardt and was a teammate of Earnhardt's early in his career.

"It was kind of eye‑opening to me just to see what that's like to have issues," Truex said. "At first, I thought it was kind of funny, and I was like, 'What the heck is wrong with you?' But then it hit me, it was like, 'this is serious.' "

Truex said when Earnhardt first stepped out of the car, he texted his good friend.

"I know he's got a lot on his shoulders -- a lot of people put a lot of pressure on him, obviously," Truex said. "In a lot of ways, he sometimes feels like he needs to be here for other people.

"But hopefully he made the decision based on what's best for him. I think he did. I know he's excited about racing still. He obviously still loves it and wants to do it, and hopefully things will all work out for him."

Dale Earnhardt Jr. returns at Daytona after letting his brain heal from multiple concussions -- and after undergoing a different sort of rehabilitation for his psyche.

The 53-year-old driver from Owensboro, Kentucky, is committed to capping off his Cup career by competing one last time at the track that has brought him joy, pain and wins.

Nationwide sports marketing executive Jim McCoy said it was always Earnhardt's health that came first. The company had a relationship with Earnhardt long before sponsoring his race car.

For the Hendrick Motorsports team, Earnhardt's return certainly has its benefits beyond what he brings to just the No. 88 car.

"The consistent nature of one driver, one crew chief, a guy who really knows the tracks, that's important," said seven-time Cup champion Jimmie Johnson, whose team shares the shop with the Earnhardt team at Hendrick. "So selfishly, it's going to help all of us.

"But on a friendship level, just to know the journey he's been on and how uncomfortable he had to make himself to correct his issues, I'm happy for him. I'm happy he's able to control his career at this point. However he wants it to wind down -- he's in control of it."

Earnhardt has stressed he wants to be the one who says when he hangs it up. He doesn't want doctors to make that decision.

He has begged his doctors to tell him if he needs to retire. So far, they have not. Earnhardt said he talked to his doctor -- with his wife, Amy, in the room -- about returning to competition.

"Every time I would say I think I want to race, he'd go, 'Do you have the passion? Do you want to be out there?'" Earnhardt said about conversations with his doctor. "Because he knows me really well and understands there are strings attached to all this and all the responsibilities and pressure and all that stuff.

"He's like, 'If you're going to do this, you have to do it because you want it. You can't go out there if you don't really care to be there, or you're worried about being there.'"

Elliott Sadler, who drives for Earnhardt, said Earnhardt's decision might be easier to make selfishly than those outside perceive it for Earnhardt.

"He knows it's his decision, and he and I have talked about that," Sadler said. "[Racing] is all we've ever known. ... We don't know anything else. It's racing or nothing. It's racing, eating and sleeping, and that's it.

"It's hard to tell a guy that all he's done his whole life, 'Is this decision for you or not?' Dude, that's the only decision we know how to make. He's not that kind of guy [to be influenced]. He's the racer that's in all of us."

While the Dale Jr. brand has expanded into its own mini business empire, Sadler doesn't see Earnhardt as the one worrying about it.

"Dale has always been about the racing and the blue collar and for the love [of the sport], not from the business side," Sadler said "I've never seen him act like that. He wanted to prove to himself that he could fight back from this and fight back and be competitive."

The determination to get healthy and perseverance to return that Earnhardt showed since July convinced Sadler that Earnhardt wouldn't work that hard for anyone more than himself.

Earnhardt spent months doing exhausting exercises in dark rooms and in gyms to improve his eyesight and balance.

"I couldn't do that and put myself through the chance that I could be back in rehab for months and months going through that crap again if I really didn't want to be out there," Earnhardt said.

"I couldn't do it because of contractual responsibilities, or 'Boy, we just ain't ready to retire; we don't have our ducks in a row from a financial standpoint.' Or we don't have a plan after retirement. We can't keep racing because of those things. It's too much of a risk."

When the time comes to retire, Earnhardt said he will know. He wants to wait a few months before making the decision whether to sign an extension with Hendrick or to enter the next phase of his life.

"I think Carl figured out a way to get into a place to make that decision easy," Earnhardt said. "And I can do the same thing when the time comes, and I won't have any regrets. It's not going to be a lot of fun to retire, I can imagine.

"You've seen a lot of people, athletes retire in the past. It seems a very difficult statement to make, a very difficult press conference to have. But when I'm ready to do that, I'll be making that decision knowing it's the right thing to do."