Preds' Fiala out of playoffs with broken leg

Nashville Predators forward Kevin Fiala broke his left leg in Wednesday night's Game 1 against the St. Louis Blues and is out of the playoffs, the team announced."During last night's game, Kevin Fiala sustained a fracture of his left femur," Predators... 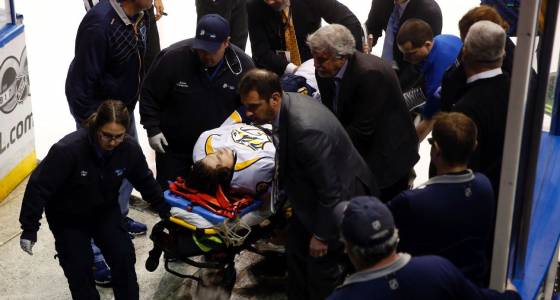 Nashville Predators forward Kevin Fiala broke his left leg in Wednesday night's Game 1 against the St. Louis Blues and is out of the playoffs, the team announced.

"During last night's game, Kevin Fiala sustained a fracture of his left femur," Predators general manager David Poile said in a statement. "He underwent successful surgery at Barnes-Jewish Hospital in St. Louis and is resting comfortably.

"He is extremely disappointed that he will not be able to help his teammates in their quest for the Stanley Cup, but is looking forward to starting his rehabilitation upon his return to Nashville. The Predators organization would like to thank the St. Louis Blues Medical Team, especially Head Trainer Ray Barile, Drs. Rick Wright and William Ricci, as well as the nurses and personnel at the Barnes-Jewish Hospital for their outstanding care."

Fiala was hit by Blues defenseman Robert Bortuzzo and went hard into the boards behind the St. Louis net at 1:46 of the second period. The injury led to a 17-minute delay while Fiala received medical attention. He was taken off on a stretcher.

"It was tough," Predators defenseman P.K. Subban said Wednesday night. "You never want to see a young kid go down like that and be taken off on a stretcher. I've experienced it before and it's not fun, especially for your family and friends, so we hope he's OK."

After the game, the Predators said Fiala was "alert and in stable condition."

After the delay for Fiala's injury and the arrival of a second ambulance at the arena, the Predators responded with a Subban goal 36 seconds after play resumed. Nashville went on to win 4-3 and take a 1-0 lead in the series.

"Obviously, responded very well with that goal, but it's hard to see your teammate go down like that," Predators center Colin Wilson said. "I feel for him. Great teammate, great player. Going to have to rally around him."

Nashville selected Fiala, 20, with the 11th pick in the 2014 draft. He scored two goals in the Predators' first-round sweep of the Chicago Blackhawks.