No shoulder surgery for Bears’ Kyle Long this offseason

Kyle Long will focus on rehabilitating from reconstructive surgery on his right ankle and has decided not to have surgery this offseason to repair a partially torn labrum in his left shoulder.Long has been rehabbing from surgery to repair his right ankle,... 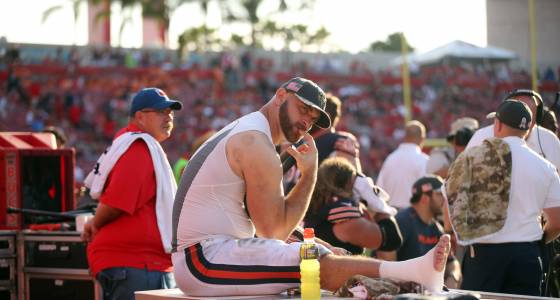 Kyle Long will focus on rehabilitating from reconstructive surgery on his right ankle and has decided not to have surgery this offseason to repair a partially torn labrum in his left shoulder.

Long has been rehabbing from surgery to repair his right ankle, which was seriously injured in the Nov. 13 loss at Tampa Bay. Long suffered ligament damage and basically tore everything but his Achilles tendon.

Originally, he was scheduled to undergo surgery on his left shoulder earlier this month. But now Long will focus solely on returning from the ankle surgery. The three-time Pro Bowl selection played through the shoulder injury, which happened in preseason, for 10 games before the gruesome ankle injury at Raymond James Stadium when he was rolled up from behind by fullback Paul Lasike on a shovel pass near the goal line.

Howie Long, Kyle’s father, told the Tribune that his son struggled with medication when he underwent ankle surgery in Charlotte, N.C. Long lost 40 pounds but part of that was by design in order to make recovery from an ankle injury easier.

The Bears extended Long’s contract in September just before the start of the regular season, adding four years at $40 million total with $30 million guaranteed. The new money came at a time when the team knew of the shoulder injury and was comfortable with him playing through it during the season.

It’s possible Long will have the shoulder repaired next offseason, but it’s also easy to find players that have played numerous seasons with torn labrums. Right now, his focus is on getting the ankle all the way back and that’s going to be an extended process.