Should the Jets draft a quarterback with the sixth overall pick?  Depending on how the first five picks unfold, one or more of these quarterbacks could be available for them: Clemson's Deshaun Watson, North Carolina's Mitch Trubisky, and Notre... 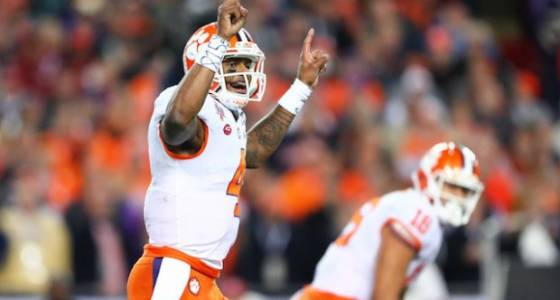 Should the Jets draft a quarterback with the sixth overall pick?

Depending on how the first five picks unfold, one or more of these quarterbacks could be available for them: Clemson's Deshaun Watson, North Carolina's Mitch Trubisky, and Notre Dame's DeShone Kizer.

But NFL Network analyst Mike Mayock believes the Jets should steer clear of a quarterback at No. 6, and he explained why during a Monday conference call with reporters.

"If you're asking me whether the Jets at No. 6 should take a quarterback, I would emphatically tell you no," Mayock said. "I don't have a top 10 grade on any quarterback in this draft. I would not be in that conversation."

Indeed, none of those three prospects is considered a sure-thing franchise quarterback, along the lines of Andrew Luck. Plus, the first three teams drafting this year (Browns, 49ers, and Bears) could all pick a quarterback. Or at least some of those three could.

"The quarterback thing for the Jets is really frustrating," Mayock said. "They took [Christian] Hackenberg last year. Geno [Smith] is not working out. [Bryce] Petty is still on the roster. So they've expended some pretty high draft picks on a bunch of quarterbacks that have paid no fruit."

The Jets drafted Smith, now a pending free agent, in Round 2 in 2013. They took Hackenberg in that round last year. In between, they selected Petty in Round 4 in 2015.

They have holes at both tackle spots and center on their offensive line. They also have needs in the secondary and must upgrade their edge-rushing production. Mayock doesn't think offensive line is the way to go at No. 6 for the Jets.

"At No. 6, is there a guy worthy of that?" he said. "Probably not. Just because of value, unless they trade back, I think you're either going to look at a defensive back -- corner or safety -- or one of the edge-[rushing] guys.

"I think that's where they're going to end up being, because when you're picking sixth, you've got to get a great football player. You've got to get one of the five or six best players in the draft. I think if you're the Jets, you're hoping a couple of those quarterbacks go early, so a better [non-quarterback] positional player falls to you."

In 2015, the Jets got defensive end Leonard Williams at No. 6, and he's been productive so far. Williams was the Jets' highest pick since 2008 and 2009, when they took defensive end Vernon Gholston sixth and quarterback Mark Sanchez fifth. Gholston is an all-time bust. While Sanchez did some good things for the Jets, he never fully panned out as they hoped.