NASCAR came up with all kinds of new gizmos to jazz up its product for the 2017 season.Turned out none of them was especially needed Sunday at Daytona International Speedway, where Kurt Busch won a completely enthralling Daytona 500.“We put on a performance... 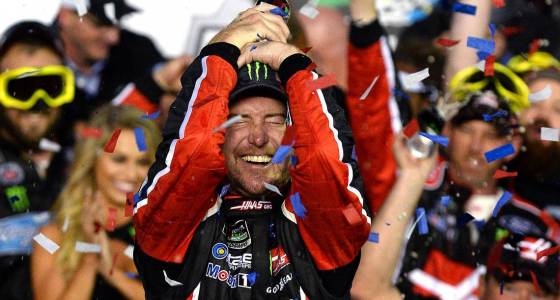 NASCAR came up with all kinds of new gizmos to jazz up its product for the 2017 season.

Turned out none of them was especially needed Sunday at Daytona International Speedway, where Kurt Busch won a completely enthralling Daytona 500.

“We put on a performance those last 50 laps,” Busch said of a race that featured eight accidents and was decided when three of his competitors ran out of gas ahead of him. “Everybody came home safe and that’s what I’m most proud of.”

Not included among the leaders were Chase Elliott, Austin Dillon and Kyle Larson, each of whom ran out of gas during the race’s final laps, allowing Busch to slip past and win.

It was the first Daytona 500 victory of Busch’s career, who won the 2004 Cup championship and now has 29 career victories. It was also a somewhat unlikely victory for Stewart-Haas Racing, which switched manufacturers from Chevrolet to Ford in the offseason.

During the offseason, NASCAR was also announcing a series of changes aimed at helping stem a decline in attendance and television ratings. Among them were segmenting races into three stages that provided drivers with chances at earning points throughout races.

None of those changes seemed to play a huge part in the drama Sunday’s race otherwise provided. With attrition being the key factor, the race really didn’t need spicing up.

With only 25 of the race’s original 40 cars still running, Elliott took control when he passed Joey Logano on Lap 175. As Elliott maintained a steady – if small – lead, he also began to run out of fuel. With three laps remaining, his tank was empty.

That gave the lead to Larson, who lasted just two laps before he also ran out of gas.

There to take full advantage was Busch, who was also worried about fuel.

“I almost forgot to drive the line I was supposed to because I was shutting off all my switches, going to reserve fuel and saying a Hail Mary,” said Busch, who added that he drove the last 30 laps without his side-view mirror, which had broken off. “It all turned out. I was seeing all these young guys, all these new guys. I’m like, ‘Aha, I’m the old bull here. I’ve just got to take my time.’ ”

Elliott, who made the playoffs last season as a rookie, is still without a Cup victory.

“It was a disappointing finish to a good day,” Elliott said. “Just one of those things you can’t do anything about.”

If the new stage format accomplished anything Sunday, it did make the early and mid-portions of the race more interesting to follow, even if it’s difficult to say if the accidents were a byproduct of that.

Busch’s victory seemed to make SHR’s switch from Chevy to Ford during the offseason seamless. Kevin Harvick won the second stage of the race after finishing second in the first stage. Clint Bowyer (32nd) and Danica Patrick (33rd) both had strong runs going until they fell victim to accidents.

“If I knew all I had to do was retire to get it done, I’d have done it a long time ago,” joked Stewart, who retired from Cup racing after last season without winning the Daytona 500. “But nobody complained this winter when we had all the hard work and the long hours.”

After the race, Busch mentioned his wife Ashley Van Metre – whom he married in the offseason – several times. He also acknowledged the bumpy ride he’s been on over the past several years. Busch was suspended for the Daytona 500 and two other races in 2015 for an alleged domestic incident with his ex-girlfriend (she was later indicted for stealing from her own charity). When he signed with SHR in 2014, it was his fourth team in four years.

“Ashley has helped me digest better feelings towards how to approach situations,” said Busch, 38. “Age and wisdom, they come together. Youth is wasted on the young. I’ve been through some different patches here and there.”