For a few hours on Friday, the drama of the past week gave way to the part of this the Lakers love.Actual basketball.The result wasn’t what they wanted, but some normalcy returned for the Lakers on Friday, after an All-Star break that included a complete... 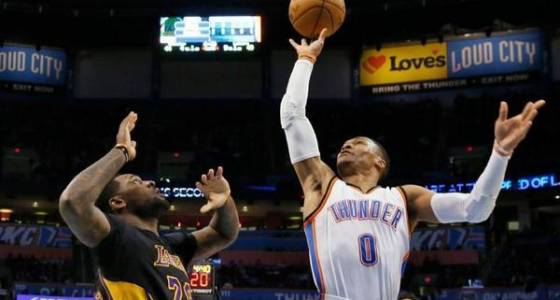 For a few hours on Friday, the drama of the past week gave way to the part of this the Lakers love.

The result wasn’t what they wanted, but some normalcy returned for the Lakers on Friday, after an All-Star break that included a complete restructuring of the front office and two trades.

With new president of basketball operations Magic Johnson watching and evaluating at Chesapeake Energy Arena, the Lakers played a game for the first time in nine days. They lost to the Oklahoma City Thunder, 110-93, falling despite cutting their deficit to single digits in the fourth quarter.

“Us at the end, being down by 20, not tucking our tail at the end, shows some steps and some growth,” Lakers guard Jordan Clarkson said. “We just gotta keep playing tough and keep showing steps in the right direction.”

Said Coach Luke Walton: “For me it’s why I love the job that I have. [It’s] the games, the practice, the playing that I really enjoy. There’s always business involved at this level, but this is always kind of the reward, getting to go out and compete against other players.”

Coming into Friday’s game, the Lakers were not so foolish as to think they could stop Thunder star Russell Westbrook.

All they hoped to do was make things a little bit tougher on him.

It worked for a time. Westbrook missed his first seven shots and made only four of 18. But Westbrook still notched his 28th triple-double of the season, with 17 points, 17 assists and 18 rebounds, 16 of them on defense. It was only the third time in 40 years that a player had at least 17 points, 17 rebounds and 17 assists, as Westbrook joined Johnson and Rajon Rondo in the exclusive club.

The Lakers shot 34 three-pointers, and made seven of them. They shot 39.1% overall. Nick Young made only one of eight three-point attempts.

“Just getting the rust off,” Young said. “I think I’ll be all right.”

Lakers point guard D’Angelo Russell scored 29 points, with six assists and four rebounds. He made three of 12 three-pointers. He also had a career-high four steals.

“He had some really good moments,” Walton said. “I liked how he was being vocal out there and trying to take charge. Sometimes he was really good doing it. Other times he took some poor shots that led to run-outs the other way.”

Reserve forward Larry Nance Jr. had only four points but a season high 12 rebounds — two shy of his career high.

It was the Lakers’ first game without veteran shooting guard Lou Williams, and first game with Corey Brewer, whom they acquired in the trade.  Brewer first practiced with the Lakers on Thursday and played four minutes. Taj Gibson, traded from the Chicago Bulls to the Thunder on Thursday, received a standing ovation when he checked into the game for the first time with 3:47 remaining in the first quarter. The former USC star scored 12 points in 21 minutes.

And as they said they would, the Lakers turned more and more to their future. Rookie center Ivica Zubac checked in with 7:51 left in the first quarter and put up 11 points and five rebounds. The Lakers used a lineup that included Zubac, Nance, Russell, Clarkson and Brandon Ingram as their second unit.

“We challenged Zu before the game about guarding [Enes] Kanter as being one of the most skilled bigs in the league,” Walton said. “He got beat a couple of times and I thought made some real good progress as he got more comfortable out there.”

Progress and growth again were the Lakers’ focus. That’s what every game the rest of the season is about.

But they were far from being complacent because of that modest goal, with Johnson’s presence offering a new incentive.

“It’s like you’re starting over and trying to impress,” Russell said. “Everybody has to look over their shoulders once again. It’s like coming to a new team. Trying to impress the GM and the guys in the front office with your play and off the court the way you handle yourselves. So it’s all different.”