Kings, Isles should be selling, not buying

Scott Burnside: I hear what Los Angeles Kings GM Dean Lombardi is saying when he says he obtained Ben Bishop from the Tampa Bay Lightning on Sunday to have a No. 1 goalie every night, along with the recently returned Jonathan Quick. But I still don't get... 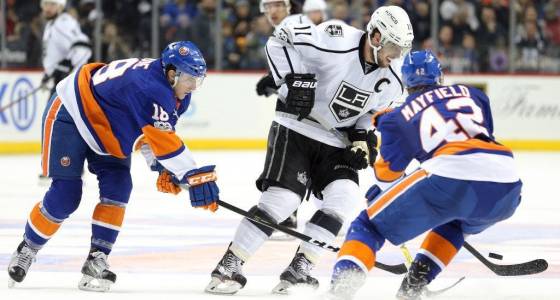 Scott Burnside: I hear what Los Angeles Kings GM Dean Lombardi is saying when he says he obtained Ben Bishop from the Tampa Bay Lightning on Sunday to have a No. 1 goalie every night, along with the recently returned Jonathan Quick. But I still don't get it. It's not that the Kings are out of it by any stretch, but are the Kings currently out of the playoff picture because of their goaltending? Not really. The Kings are fifth in the NHL in goals allowed per game and Peter Budaj, now with the Lightning, is tied for the league lead with seven shutouts. The Kings allow the fewest shots per game. Maybe Bishop catapults the Kings into the postseason and they are a force. But there's little about the Kings' game of late to suggest that's going to be the case, as they are 5-6 in February and the offense continues to sputter. Tyler Toffoli has struggled since coming back from injury and Anze Kopitar shockingly has just six goals on the season. Two years ago, Lombardi spent a first-round pick to bring in Andrej Sekera from the Carolina Hurricanes and the Kings missed the playoffs. They should have been sellers then and I'm not sure they shouldn't be selling now.

Rob Vollman: The New York Islanders have a league-best 14-6-2 record since Jan. 12, including 12-5-2 under new coach Doug Weight, which has pulled them back into contention for the final wild-card position. That might inspire them to pick up a few players by the trade deadline, but their underlying numbers don't suggest that they're really in a position to truly compete. Instead of giving up future assets to try to squeeze into the postseason, this could be an opportunity to improve the team's long-term health by freeing up cap space and building up its organizational strength.

Craig Custance: The Kings aren't a bad option as an answer to this, but as long as you have Drew Doughty, Kopitar and Quick, you have a shot. I don't mind that Lombardi tries to take advantage. Otherwise, the teams that have been actively in pursuit of trades have a pretty good reason for doing so. I'll be interested to see what the Boston Bruins do in the next couple of days. They've been winning lately but got hurt at the deadline last year when they traded for rentals and didn't make the playoffs. There's going to be a temptation to buy again but maybe there's a deal to be made that helps them now and in the long run as well. That would be the wise path for GM Don Sweeney.

The New York Rangers and Chicago Blackhawks are among the teams that have the biggest trade needs to bolster their Stanley Cup chances as we head toward the deadline.

Joe McDonald: Speaking of the Bruins, I think Sweeney and team president Cam Neely will be deliberate in choosing the right path for the organization at the deadline this season. The Bruins have had talks with the Colorado Avalanche on a few possibilities and chatter has picked up with other teams in the past week. Sweeney has no intentions of acquiring rentals this time around. Under new coach Bruce Cassidy, the Bruins have won six of seven games and are third in the Atlantic Division with 70 points. Maybe this team shouldn't buy or sell at this point. Sure, in order to contend for a Stanley Cup, the Bruins need a top-two defenseman and eventually will need help offensively too. But because Boston has shown signs of life under Cassidy, and some of the younger players are finally contributing on a consistent basis of late, it wouldn't surprise me if Sweeney is quiet at the deadline.

Pierre LeBrun: It is really interesting to see the Kings rent Bishop when they're not sitting in a playoff spot. Of course, the point is that they hope a Bishop-Quick combo during a busy March will help them nab said playoff spot. But they're six points behind the Calgary Flames, the team closest to them in the Pacific Division. They're three points behind the St. Louis Blues for the final wild-card spot. But it's also Lombardi saying let's give this core group one last shot before the team transitions younger starting next season.