Kansas No. 1 in AP, Gonzaga stumbles to 4th

Kansas, which won a record 13th consecutive Big 12 regular-season title, is the new No. 1 in The Associated Press men's college basketball poll.The Jayhawks (26-3) moved up two places to the top spot, receiving 58 first-place votes Monday from the 65-member... 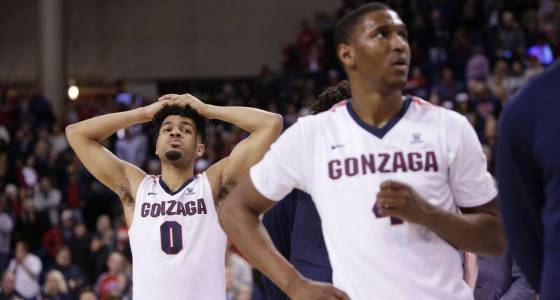 Kansas, which won a record 13th consecutive Big 12 regular-season title, is the new No. 1 in The Associated Press men's college basketball poll.

The Jayhawks (26-3) moved up two places to the top spot, receiving 58 first-place votes Monday from the 65-member national media panel.

Kansas is the sixth school to be No. 1 this season. The Jayhawks were on top last season for five weeks, including the final three polls of the season.

Villanova (27-3) remained second, despite losing to Butler last week. The Wildcats were No. 1 on two ballots. UCLA (26-3), which was No. 1 on three ballots, moved up from fifth to third after its win over Arizona on Saturday.

Gonzaga (29-1) fell to No. 4 after losing its first game of the season, an upset by BYU on Saturday. The Zags, who had been No. 1 for the past four polls, received two first-place votes.

North Carolina moved from eighth to fifth and was followed by Oregon, Arizona, Louisville, Kentucky and West Virginia.

The Jayhawks own the Big 12. Well, that's nothing new, right? With Gonzaga finally falling, Kansas, fresh off its 13th Big 12 title, sits on top of the world as Selection Sunday approaches.

Gonzaga's chase for the perfect season is over, but that doesn't mean the Zags are in trouble.

Iowa State (19-9), which was ranked for the first six polls of the season, moved back into the Top 25 after beating Baylor on Saturday. The Hurricanes (20-8), who were ranked for most of last season, reaching as high as seventh, moved into the poll after Saturday's victory over Duke.

Creighton (22-7), which was 23rd, dropped out for the first time this season after losses to Providence and Villanova. Maryland (22-7) fell out from 24th after losses to Minnesota and Iowa.

The Jayhawks' conference title run matches UCLA's streak in the Pac-8 in the 1960s-70s.

The other teams to be No. 1 this season were Duke, Kentucky, Villanova, Baylor and Gonzaga.

Miami gives the Atlantic Coast Conference seven teams in the Top 25, while Iowa State gives the Big 12 four. The Pac-12 is next with three teams.