CHAPEL HILL, N.C. -- Joel Berry Sr. wanted the distinction made clear. He absolutely was not naming his son junior. Uh-uh. No way.He knew several Juniors in his neighborhood -- his own brother was a Junior -- and those who had the nickname "Junebug" because... 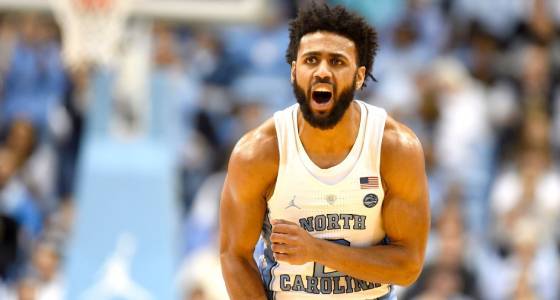 CHAPEL HILL, N.C. -- Joel Berry Sr. wanted the distinction made clear. He absolutely was not naming his son junior. Uh-uh. No way.

He knew several Juniors in his neighborhood -- his own brother was a Junior -- and those who had the nickname "Junebug" because they were Juniors, too. And to a person, Berry said, "each one was a hell-raiser."

Joel Berry II isn't on that hell-raiser level, but there's some smoldering going on every time he takes the court for North Carolina.

He's the emotional leader who will lead the Tar Heels into a treacherous stretch of games to close the regular season beginning Wednesday night against Louisville.

"Joel is very emotional in both directions -- he gets really fired up and he gets really ticked off," coach Roy Williams said. "I think that sometimes there has to be more of a level activity in both of those areas, but I like guys who get into the game, that lose themselves into the game."

Berry stewed after UNC's 86-78 loss at Duke, upset with himself after going 3-for-5 from the free-throw line. He's a career 84.5 percent free-throw shooter, which currently ties him for third in program history with Danny Green.

That's the edge that Williams likes Berry to have. It pushes him to get better. But that other direction Williams spoke of surfaced in UNC's 77-62 loss at Miami on Jan. 28, when Berry picked up a technical foul.

It was the first technical by a Carolina player since John Henson in a 2012 NCAA tournament victory over Creighton. Henson thought Bluejays guard Grant Gibbs took an intentional swipe at Henson's injured left wrist and got in Gibbs' face.

Last month, Berry expressed his disagreement with an offensive foul called on Justin Jackson and was already frustrated by the Heels' horrible start.

"I put that all on myself," Berry said. "I kind of hurt my team, so that was out of character for me and that will never happen again."

His competitive nature is such that he's always playing with an edge. He just can't help himself, but it's so subtle that observers not playing close attention might miss it.

In North Carolina's 107-56 win over NC State on Jan, 8, Berry hit back-to-back 3-pointers early in the game and turned toward the Wolfpack bench and yelled, "Y'all better cover me." Seconds later, when the Wolfpack called timeout, an official approached Berry with a low-key lecture to not do it again.

Same thing happened against Providence in the 2016 NCAA tournament: made a 3-pointer, directed words to the opponents' bench, got lectured by an official.

What set him off against the Friars came when the teams crossed paths between shootarounds. He doesn't even remember what it was specifically, but the Friars were laughing at Carolina.

Berry doesn't back down. During an early-season game against Chattanooga, he dove for a loose ball and a Mocs player dove, too, forcing simultaneous possession. As officials came in to separate the two players who were still tugging for control of the ball, Berry snatched it away. To be clear, Berry wasn't trying to fight the guy. He just wasn't going to give the ball up.

Berry is a firm believer that toughness isn't always physical. His father taught him that through karate lessons, but he also learned from simply watching his parents and the sacrifices they made.

There were many summers when the family didn't take a formal vacation. Trips to AAU tournaments were considered their getaways. And Joel would watch his parents work overtime so he could attend a private school, Lake Highland Prep.

"I always thank my parents each and every day [for] just telling me you have to have a chip on your shoulder, regardless of what it is," Berry said. "Whether it's on the court, whether it's in the classroom, just always try to be better."

Berry's 0-for-8 outing against the Hurricanes festered inside him during the flight back to Chapel Hill. Once the plane touched down, it wasn't too long until he was back in the gym, shooting by himself.

The competitor in Berry won't let him rest.

Berry has held his own against the three best point guards the Tar Heels have faced: Oklahoma State's Jawun Evans, Kentucky's De'Aaron Fox and NC State's Dennis Smith Jr. (twice). In those four games, Berry averaged 21 points and 5.5 assists, shooting 63 percent from the field and 53.8 percent from 3-point range.

Hold up. Berry played in the McDonald's All American Game and was selected to play in the Jordan Brand Classic. He ranked No. 17 in the ESPN 100 in 2014. (Tyus Jones and Emmanuel Mudiay were the only point guards in the class ranked ahead of him.) Berry was also the first three-time winner of Florida's Mr. Basketball award.

Yet Berry felt he didn't get noticed.

That's the way to keep smoldering.