Is this the year the Pac-12 ends its Final Four drought?

The Pac-12 has come a long way since 2011-12.It feels crazy now, but five years ago, the conference got just two NCAA tournament bids -- which, if our math checks out, is just one more than the bare minimum NCAA tournament rules allow. Washington, which went... 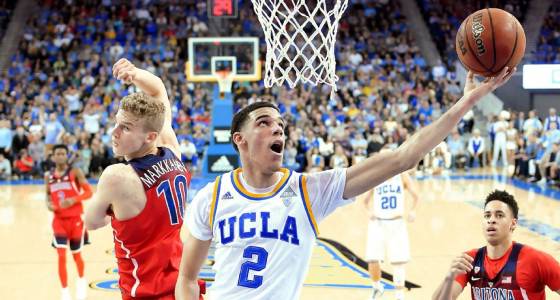 It feels crazy now, but five years ago, the conference got just two NCAA tournament bids -- which, if our math checks out, is just one more than the bare minimum NCAA tournament rules allow. Washington, which went 14-4 en route to a regular-season Pac-12 title that season, became the first power-conference team to win a league title but fail to get an at-large tourney bid. This was a crazy aberration, sure, and things were better the next March -- yet even that five-bid league's regular-season champ (UCLA) fired its coach (Ben Howland) a few days after the season ended.

Should a team be eligible for the NCAA tournament if it can't win at least half of its conference games? In this year's NCAA tournament, though, the selection committee might not have a choice.

We're likely to see the fewest number of mid-major teams in this year's bracket since the NCAA tournament expanded to 68 teams. So what happened? And why?

The 2016-17 (cue the Bill Walton soundboard here) conference of champions makes those days feel like ancient memory. The conference might not boast the depth of the ACC or the pound-for-pound brutality of the Big 12, but it has something few leagues can offer, something this league itself hasn't had in a long time: three evenly matched squads, each uniquely talented, all of which -- most importantly -- have a real chance of ending the league's nine-year Final Four drought.

Two of those three will be on the same floor this weekend, when UCLA travels to Tucson, Arizona. One month ago, at UCLA's expense, the Wildcats exploded into the national conversation. Their 96-85 win in Westwood -- and the impactful return of previously (and until-then-mysteriously) suspended guard Allonzo Trier -- took them from "talented but young" to "we need to talk about Arizona right now," all in the matter of an afternoon.

The Wildcats carry Pac-12 title implications into Saturday's matchup; UCLA's January losses at Oregon and USC left the Bruins a step (or two) behind Oregon and Arizona in the regular-season race. Yet, as Andy Katz concisely outlined this week, the stakes are arguably much bigger.

As nice as a conference title is -- and what team doesn't want to win its conference? -- Arizona, UCLA and Oregon are really playing for dibs on a potential No. 1 seed in the West Region, on the (extremely unlikely) chance Gonzaga drops a couple of games to WCC competition before Selection Sunday.

Even if the Bulldogs don't fall apart (and they won't), just as important could be geography. For all three, the chance to be a No. 2 seed in the West is vastly more appealing than just about any other outcome. As usual, three of the four NCAA tournament regionals (New York; Memphis, Tennessee; and Kansas City, Missouri) are disproportionately distant from Oregon, California and Arizona. Programs of this stature travel in style these days, sure; it's not as if anyone will be pulling in to Memphis on a Greyhound bus. Still, geography is undeniably an advantage, even on neutral courts, so much so that FiveThirtyEight includes "travel distance from the team's home campus to the tournament site" in its NCAA tournament prediction model: "A team that has to travel across the country to play a tournament game can face the equivalent of a 2- or 3-point disadvantage against one playing close to home. Essentially, it's playing a road game." If you're one of these teams, asking your fans to show up in droves is easier if the flight lands in San Francisco and not, say, at LaGuardia Airport.

Odds are at least two of the Pac-12's top three will end up somewhere outside the comfy confines of the West Region. Joe Lunardi's Thursday bracket gave the Ducks the nod, with Arizona as the No. 2 seed in the Midwest and UCLA as a No. 4 in the South. How far could the Bruins move up the seed line with a win at Arizona? Could another marquee win over UCLA give the Wildcats preference over the Ducks?

These are questions that won't be answered in full until the Pac-12 tournament wraps up -- and, presumably, some combination of these three will meet once or twice along the way. This weekend, other questions take precedence: Has Arizona freshman star Lauri Markkanen fully snapped out of the four-game scoring funk (when he scored 22 points in 105 minutes on 5-of-25 shooting) that mildly stained his otherwise brilliant freshman season? Has UCLA's ridiculously awesome offense -- and, yes, it is ridiculously good -- overshadowed a just-decent-enough defense? Can the Bruins, say, keep Arizona from scoring 96 points in 73 trips, the Wildcats' tally in Westwood in January?

Meanwhile, the Ducks still have the second leg of their NorCal trip Saturday afternoon, at Stanford, where the Cardinal have been harassing opponents into the Pac-12's top turnover rate in league play. Though if Ducks guard Dillon Brooks keeps hitting heroic game winners, it might not matter.

Since Ben Howland led UCLA to its third straight Final Four in 2008, the Pac-12 hasn't been back. It has had teams good enough to do so: two great Arizona teams halted in the Elite Eight by Wisconsin two years in a row, a No. 1-seeded Oregon that had the misfortune of meeting Buddy Hield and Oklahoma in the same round last year. But since its last appearance, the Pac-12 has never had three teams this good all at once.

The Pac-12 title chase is nice, as far as it goes. But Oregon, Arizona and UCLA will be playing for much more. They already are.

Anyone expecting Florida -- maybe the surprise team of the 2016-17 season -- to fall apart after center John Egbunu tore his ACL 10 days ago is still waiting. Yes, the Gators looked a little shaky in an unwatchable 57-52 win at Mississippi State last week, but they were a joy to watch in Tuesday's 81-66 win over South Carolina, shredding ostensibly the SEC's best defense with great pace and better passing. Losing Egbunu hurts, no question; he was the Gators' best rebounder by far, not to mention their best rim protector. (Kevarrius Hayes might earn that title yet -- he has the SEC's second-highest block rate at 10.1 percent -- but he has played far fewer minutes this season.) But Florida still looks awfully good without him.

Kentucky, meanwhile, has had its fair share of questionable performances in the three weeks since it lost by 22 in Gainesville; four of its five wins since -- LSU, at Alabama, at Georgia, at Missouri -- have come by 10 or fewer points. The Wildcats led Mizzou by a point at the half Tuesday. It was hardly impressive stuff. And yet, does anyone really have any significant questions about UK's ability to flick a switch, turn its immense talent loose and get back to the Final Four? Should anyone? Saturday will be telling on both ends.

There are obviously bigger games this weekend: Creighton at Villanova, Butler at Xavier, Duke at Miami, Baylor at Iowa State, Wisconsin at Michigan State and so on. But let's be real: This is Gonzaga's final regular-season game. It also happens to come against the West Coast Conference's only semi-capable, non-Saint Mary's threat to the Zags' 30-0 season. It's in Spokane, Washington, for one; Gonzaga is much, much better at basketball than BYU, for another. KenPom.com gives the Bulldogs a 99 percent of winning.

The sell here is simpler than all that: As much as Wichita State and Kentucky have spoiled us in the past half-decade, the fact is undefeated seasons simply don't come along all that often. Until Gonzaga's is over, the Bulldogs should be on your television. The end.