SCOTTSDALE, Ariz. — It's 7:15 a.m. and the Rockies are piling out of their Land Rovers, decked-out Ford F-150 trucks and well-appointed SUVs. Late-February mornings are still chilly in the desert, so the players' breath hangs in the air as they walk... 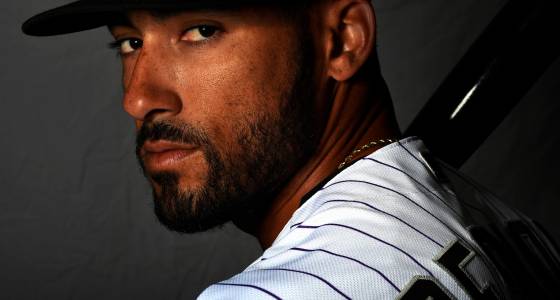 SCOTTSDALE, Ariz. — It's 7:15 a.m. and the Rockies are piling out of their Land Rovers, decked-out Ford F-150 trucks and well-appointed SUVs. Late-February mornings are still chilly in the desert, so the players' breath hangs in the air as they walk to their clubhouse at Salt River Fields.

Ian Desmond, the Rockies' new, high-profile first baseman, is already hard at work on one of the complex's outer diamonds. He is fielding hot grounders and scooping up baseballs that are intentionally short-hopped into the dirt in front of first base.

Making the exercise more difficult is the brilliant sun rising over the eastern horizon and staring Desmond directly in the face. At some point during the regular season, when the sun is streaming in from left field at Coors Field, Desmond will have to face similar conditions. He knows that four-time Gold Glove third baseman Nolan Arenado will purposely throw him one-, two- or three-hop bullets so the ball doesn't get lost in the Colorado sun. Desmond knows he will have to make the play, on either side of the bag, with a runner barreling down the first-base line.

"That's part of home-field advantage," he said. "You have to be aware of it, practice it and make it work for you. I've told Nolan that we need to practice that play when he's three-bouncing it to first base. Because I've told Nolan, ‘That's a play that I don't ever want you to be afraid to make.'

"I don't want Nolan to ever get charged with a throwing error based on the elements simply because I can't make the play. I don't want to ever penalize him for being aggressive and being who he is."

Desmond, 31, a former all-star shortstop with Washington and one-season all-star outfielder with Texas in 2016, shocked the baseball world by signing a five-year, $70 million contract to be the Rockies' first baseman — despite him never playing the position before, at any level.

For many players, spring training is about tuning up for the season. For Desmond, spring training means on-the-job training. It means constantly massaging his new first baseman's glove to make sure it's soft and pliable.

"As a very broad answer, I'll say this spring is about learning how to play first base," he said. "I'm learning positioning and footwork. I'm learning what ball is mine, what ball is the pitcher's, what ball should be fielded by (second baseman) DJ (LeMahieu)? I have to learn how to field bunt plays — where to be, where to throw. I have to get the timing right. There's a lot to know."

Critics have scoffed at the position switch, saying Desmond's athleticism will be wasted by anchoring him to first base. He vehemently disagrees.

"You're moving all over the place," he said. "You make your athleticism work for you and get as much out of it as you can, regardless of position. You can do things that other people can't do, moving back and forth, if not laterally. I feel like that's something that I'm going to be able to bring to the table eventually. But it's going to take a lot of work."

IT'S NOT AS EASY AS IT SEEMS

"I mean, sure, it's easy to just stand there and then wait for people to throw you the ball right at the chest," Gonzalez said. "Or it's easy to catch a groundball and just run to first, or flip it to the (pitcher).

Desmond has no doubt he can master his new position before the Rockies open the season April 3 at Milwaukee, but he admits he is facing challenges he didn't expect.

"Yesterday, I was fielding a bunt and the first one I got, I kind of rushed and I chucked it down the third-base line," he said, chuckling at the memory. "I was just going a little bit too fast. I know the speed of the bunt play from shortstop, because I was always the one running over to cover third, but I have to learn the tempo of making the play as a first baseman.

"I have to slow it down a little bit and focus on my target. That seems simple, but if it's a new position, you have to learn. So, yesterday, working on throwing that ball down the line, it started to create an instinct for me."

Veteran slugger Mark Reynolds, Colorado's primary first baseman last season and likely backup this season, converted from third base to first in 2012 as a member of the Baltimore Orioles. He can relate to Desmond's transition.

"Ian is going to figure it out just fine," Reynolds said. "For me, the biggest thing was figuring out the footwork around the bag — where to position myself to get the best angle on the throw. You also have to know where the infielder is throwing from and what the ball is going to do."

One of the toughest plays, Reynolds said, is holding a runner on base with a pull-hitting, left-handed batter at the plate.

"That can get a little sketchy," he said. "There's a lot going on there."

One of the prettiest plays in baseball is the 3-6-3 double play (first to short to first). It requires a right-handed first baseman, like Desmond, to field the grounder, spin, make an accurate throw to second base, then scramble back to the bag.

“That's a bang-bang play," he said. "Early on, when I was practicing, I was getting kind of dizzy. It takes a lot of reps to get used to it. You have to get oriented. Like I said, it's about making it part of your instincts."

"We have talked about this from the day we signed Ian," Black said. "For me, it's an extremely low-risk move. We are talking about a great athlete and a guy who was a middle-of-the-diamond player and also a center fielder.

"Still, first base still requires athleticism and it's a huge advantage if you can defend well at that position. It can change your defense, it can change a whole game. The ball dug out of the dirt, the diving play in the hole, the nice play on a chopper or a bunt down the line. Those outs and those plays are often underrated during a game. I think Ian can thrive at first. The only thing he has to do is get over his discomfort of being at a new position."

Arenado broke into the majors with three-time Gold Glove winner Todd Helton manning first base. In 2014-15 he trusted his throws to Justin Morneau. Last season, Reynolds did an admirable job at the bag. Arenado, who's already bonding with Desmond on the field and at the golf course, is confident his new teammate will be golden.

"We have a lot of guys in this infield who can pick it," Arenado said. "But we also need a first baseman who can pick us up when we make a bad throw, because they're going to happen. With those other guys — Helton, Morneau, last year with Mark — I could make a tough throw and know that all I had to do was get it over there, give them a chance.

"Ian is new, and it's going to take spring training to get used to him, to get that trust. But I expect he's going to be fine and I can fire the ball over there knowing he'll complete the play."

Ian Desmond will try to continue the Rockies' tradition of productive first basemen: