How much is George Hill worth to the Jazz?

OKLAHOMA CITY -- George Hill is not an MVP candidate like Russell Westbrook, the point guard who got the best of Hill’s Utah Jazz with yet another dominant triple-double Tuesday night. Hill has never been an All-Star.However, Hill is without question... 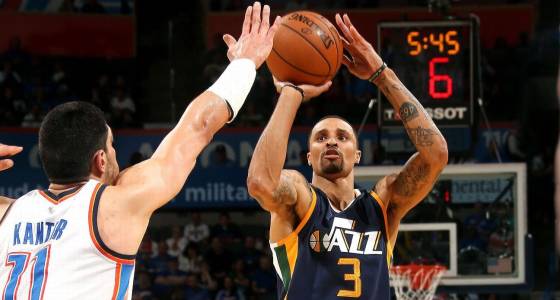 OKLAHOMA CITY -- George Hill is not an MVP candidate like Russell Westbrook, the point guard who got the best of Hill’s Utah Jazz with yet another dominant triple-double Tuesday night. Hill has never been an All-Star.

However, Hill is without question a critical piece for a Utah team that is positioned at the moment to have home-court advantage in the first round, quite a leap for a franchise that has been a postseason spectator for the past four seasons and last won a playoff game in 2010.

And Hill just might become a max player this summer. That has been the advice given to Hill, league sources told ESPN, which is why he declined the Jazz’s attempts to get him to restructure and extend his contract before Tuesday night’s deadline.

“George has been a big part of our success this season,” coach Quin Snyder said after the Jazz’s 109-106 loss to the Oklahoma City Thunder, a game in which Hill was solid (15 points, eight assists, plus-9) but Westbrook was spectacular (43 points, 11 rebounds, 10 assists). “It’s no secret how much we value him, just like we do all of our players.”

Oh, the Jazz value Hill a bit more than most players, judging by Utah’s attempts to lock him up to a rich extension.

The $88.3 million the Jazz could have given Hill to get him to commit through the 2019-20 season -- a raise of the $13.6 million they have in available cap space this season and a three-year extension worth another $74.7 million -- is almost twice as much money as the nine-year veteran has made in his career so far. But it’s not nearly as much as the $132 million over four years sources say his camp thinks he might be able to command this summer.

Is Hill worth that much? That’s for Jazz general manager Dennis Lindsey and other NBA personnel people in need of a point guard to figure out this summer.

But it’s impossible to deny how much of a difference Hill, a steady hand who is averaging 17.6 points and 4.1 assists, has made for the Jazz this season. Utah is 25-10 when he plays and 12-13 when injuries have forced him to sit.

“I think the statistics for us as a team and for him individually kind of speak for themselves,” said face of the franchise Gordon Hayward, who is all but assured to get a max contract assuming he opts to become a free agent this summer. “He’s obviously come in and been a leader in the locker room, too, [and] a leader out on the court for us. He plays with toughness, plays with poise offensively. He’s a big part of why we’ve been successful this year.”

Point guard purgatory kept the Jazz out of the playoffs last season, when Raul Neto and Shelvin Mack shared the starting job and lottery bust Trey Burke came off the bench.

Flipping the No. 12 overall pick for Hill was a tremendous offseason move by Lindsey, who also added accomplished vets Joe Johnson and Boris Diaw to complement the Jazz’s talented young core. If Hill left Salt Lake City after only one season, it could be a tremendous setback for the Jazz, especially if it influences Hayward’s decision about whether to stay with the franchise that has developed him into an All-Star.

Maybe Dante Exum, the fifth overall pick of the 2014 draft, is the Jazz’s point guard of the future. But that future can’t start next season if Utah plans to be a factor in the playoffs.

Exum, 21, has recently shown flashes of the phenomenal athleticism that so intrigued the Jazz front office when it drafted him as an Australian teenager. He appears to be fully recovered from the knee injury that forced him to sit out his sophomore season. But he’s early in the learning process, as evidenced by Exum totaling two points and one assist in 18 minutes over the past two games.

There’s good reason why Snyder played Hill 38 minutes against the Thunder, even though a toe injury that caused the point guard to miss a month earlier this season is still an issue. The Jazz needed him to match up against Westbrook to have any hope. Sure, Westbrook is special, but the West playoff bracket is loaded with elite point guards, a list that features Stephen Curry, James Harden, Chris Paul and Mike Conley.

Perhaps Deron Williams could be a decent summer fallback plan for the Jazz if things don’t work out with Hill.

Williams is obviously no longer the star he was during his first stint with the Jazz, which certainly didn’t end well, but he won’t expect to be paid like one either. Sources told ESPN that Williams is definitely intrigued by the possibility of finishing his career in Utah, where he still maintains a home.

Utah inquired about Williams when the Mavs were trying to trade the veteran point guard last week, and it could have picked him up after Dallas decided to waive him, but the Jazz opted to preserve their cap space in hopes of locking up Hill, plus they didn’t want to stunt Exum’s development.

For now, the Jazz’s hopes of doing playoff damage rest largely on Hill’s shoulder. The future can get figured out this summer.

“I don’t want to talk about none of that,” Hill said Tuesday night, irritated by the question. “I’m just here to win games right now.”