PORT ST. LUCIE, Fla. -- He's back... Well, sort of.  David Wright played in his first game since his June neck surgery on Saturday afternoon, when the Mets lost to the Washington Nationals 8-6 in their home Grapefruit League opener... 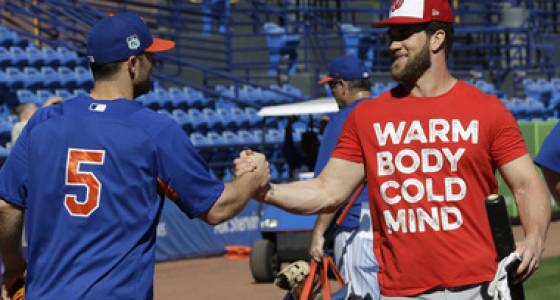 David Wright played in his first game since his June neck surgery on Saturday afternoon, when the Mets lost to the Washington Nationals 8-6 in their home Grapefruit League opener at First Data Field.

Wright batted fourth as the designated hitter, going 0-for-2. He said he's further along at this point in the season than he was last, but said it will take playing third base to really get him acclimated with game speed.

"You're going to get some butterflies at first," Wright said. "The game certainly speeds up. It's not hitting off the tee, it's not hitting with a coach, it's someone out there getting paid to get you out. It was a challenge, but I felt like I got a chance to see some pitches."

However, the Mets did have their first injury of the season when Kevin Plawecki injured his left knee in a collision at home plate with Rafael Bautista. He was diagnosed with a knee contusion and was taken for X-rays.

In the top of the sixth, Bautista scored on a groundout from third base, sliding head-first into Plawecki at the plate, and upending the catcher as his shoulder hit his knee. Plawecki remained down for several minutes with trainers before walking off the field with the help of trainers.

The Mets mounted a comeback late, capitalizing on six walks to score three times in the eighth and twice more in the ninth.

Bryce Harper scored the first run of the game with a massive home run to right field in the second inning off of left-hander Sean Gilmartin.

Gilmartin: In his first spring training start, he went two innings, allowing only the homer to Harper. He struck out one and walked none.

Cecchini and Conforto: After a home run in his first at-bat on Friday, Gavin Cecchini pinch-hit a line-drive double to left field in the bottom of the sixth. He then scored on Michael Conforto's pinch-hit single. Conforto was thrown out trying to advance to second on the throw.

Up next: The Mets continue their three-game homestand Sunday when they host the Detroit Tigers at 1:10 p.m., ET. Non-roster invitee Chris Flexen will get the start.