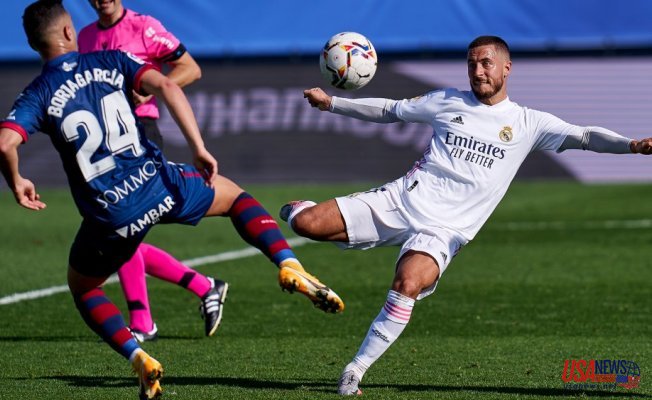 Defenceless Madrid faced Huesca in round 8 of La Liga on Saturday. Los Bancos didn’t sign any player this season. They sold Sergio Reguilon to Tottenham and Hakimi to Inter Milan. After the injury of Dani Carvajal and Odriozola, Real Madrid has limited options in the defensive line. Zidane started Lucas Vazquez as a right-back against Huesca. Vazquez showed a brilliant display of game last week against mighty rival FC Barcelona.

You will find plenty of betting websites and apps, but what's better than 2 0 Bet designed with the love and passion for football. $165 million summers signing Eden Hazard started for the home team and scored a long-range goal from his weak foot. It's great to see Hazard back in form. Hazard was so frustrated with his league campaign that he didn't even celebrate his goal properly. In the stoppage time of first half Real Madrid's number, 9 doubled the lead by scoring a brilliant header on Vazquez cross ball. There was a lack of hunger for goals in Los Blancos but spectators witnessed an attacking style of play from Zidane’s team.

In the 54th minute, Benzema being crowded by opponents' centre backs chipped the ball to Valverde who shoot it in the back of the net. After seeing a comfortable win against the visitors Zidane substituted Hazard, Valverde and Asensio with Vinicius, Isco and Rodrygo.

Casemiro is irreplaceable from Prime Madrid team. His defensive skills are second to none. Just, after 5 minutes of substitution of Brazilian Real Madrid conceded a goal. Karim Benzema scored the final goal in the stoppage time with an assist from young Brazilian Rodrygo.

Key players of the Match:

Belgian showed wonderful chemistry with Benzema in the centre-forward position. His stunning opener in the first half gives Real Madrid hope of prime Hazard.

Fede Valverde continues to impress with his form. He presses the ball, create chances and his pace is amazing.  He scored a brilliant goal and assisted Hazard for the Belgian’s goal. Uruguayan also completed 91% of his passes.

Benzema scored twice for the home team and secured 4-1 victory. He also provided an assist to Uruguayan. Frenchman is now at the top of the table with more assists this season in La Liga (3).

Barcelona was unlucky against Alaves. Barcelona had 80% possession, 25 shots with 9 on targets and 748 accurate passes in the 90th minute were unable to win against the home team. This is the fourth time Barcelona dropped points and they are on 12th position with 8 points behind the league leaders Real Madrid.

Neto’s howler cost Blaugrana 2 crucial points. Luis Roja took advantage of keeper’s error and put his team in front.  Griezmann levelled the scored in 63 minutes. After dozens of attempts, Barcelona was unable to take down one man Alaves in Mendizorroza Stadium.