Another piece of Gleyber Torres trade is turning Yankees heads

TAMPA — Had Billy McKinney not been taken by the A’s with the 24th pick in the first round of the 2013 draft, the Yankees were poised to take the left-handed hitting outfielder from Plano West Senior High School in Texas.With McKinney gone, the Yankees... 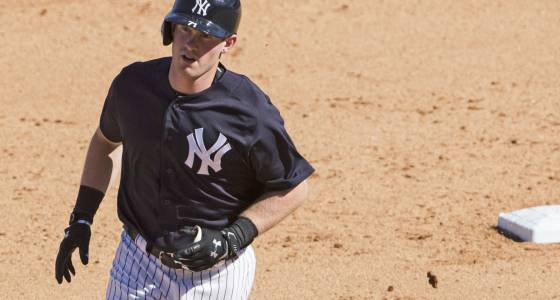 TAMPA — Had Billy McKinney not been taken by the A’s with the 24th pick in the first round of the 2013 draft, the Yankees were poised to take the left-handed hitting outfielder from Plano West Senior High School in Texas.

With McKinney gone, the Yankees used the 26th pick to select Notre Dame third baseman Eric Jagielo. He was part of the deal with the Reds that landed Aroldis Chapman. McKinney came to the Yankees in July, when the Yankees sent Chapman to the Cubs in a trade that was highlighted by shortstop prospect Gleyber Torres.

McKinney, 22, wasn’t originally invited to big league camp, but when Mason Williams and Tyler Austin were injured, McKinney was summoned.

On Sunday, the 6-foot-1, 205-pounder swatted a home run in the Yankees’ 7-2 victory over the Blue Jays at GMS Field. In four minor league seasons, McKinney is a .277 hitter with a .359 on-base percentage. He batted .435 (10-for-23) last year with a homer and five RBIs in seven postseason games for Double-A Trenton.

“We like what we have seen from him. His work is tremendous, and he has an idea how to play the game,’’ manager Joe Girardi said. “We talked in meetings that his at-bats in the last month at Double-A were as good as anybody’s. He is a strong kid who has power. We feel he is just starting to come into his own.’’

“I will probably throw at least [two games], hopefully three, but I don’t know if there is time for three,’’ said Betances, who reports to the Dominican Republic team in Bradenton, Fla., next Sunday ahead of the World Baseball Classic.

“I will try to pitch one of the exhibition games before the Classic,’’ said Betances, who threw a simulated game Sunday.

Jacoby Ellsbury played his first exhibition game of the season and went 0-for-3 and grounded into a double play.

Didi Gregorius has one more day left in camp before leaving to join the Netherlands team for the WBC.

Tony Clark said the MLBPA has moved on from their issues with the Yankees handling of Betances’ arbitration. The Yankees won the case and will pay Betances $3 million instead of the $5 million he asked for.

Following the victory, team president Randy Levine was critical of Betances and his agents, which Clark said last week was “unprecedented and unprofessional.”

“I know Dellin is focused on what he needs to do,” Clark said after holding the MLBPA’s annual meeting with the Yankees as he tours the Grapefruit League. “That page has been turned.”

Clark added that he has not had any communication with Levine since the comments.

It’s never a good idea to have a media member on the field while a big league club takes batting practice. But while the Yankees hit Sunday at GMS Field ESPN’s Jessica Mendoza shagged fly balls in center field with Brett Gardner. Next thing you know The Post’s Dan Martin will be out there.

Backup infielder Ronald Torreyes entered the game in left field. The Yankees like his versatility in the infield and believe he is athletic enough to handle the outfield.