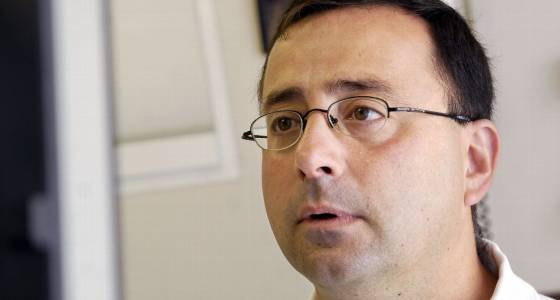 Seven different alleged victims were mentioned among the 22 charges. Five of the charges pertain to those who were under age 13 at the time of the alleged assaults.

Nassar, who is jailed without bond, is scheduled to stand trial on three other counts of sexual assault. He also faces charges of possession of child pornography and civil lawsuits from more than 30 complainants. Michigan Attorney General Bill Schuette said Wednesday he "absolutely" expects more charges to follow.

Since they began investigating Nassar five months ago, university police said 81 people have contacted detectives to accuse the doctor of assault.

"This guy is a monster," Schuette said.

Nassar's defense team has argued that penetrating the young athletes' vaginas was part of a medically acceptable form of treatment. Schuette called that claim "outrageous."

Parents were asked to leave the room or Nassar used a sheet or stood in a certain position to block any view, police said. He saw injured gymnasts at Gedderts' Twistars club in Eaton County, his Michigan State office or his home in Holt.

Nassar, 53, was charged with roughly two dozen crimes in Ingham County, the home of Michigan State, and Eaton County. The charges were the first that included crimes committed while serving in his role as a team physician at Michigan State.

"I am deeply troubled by the emerging details and recognize the courage it takes to come forward with information about personally traumatic events,'' school president Lou Anna Simon said Wednesday.

He was fired by Michigan State last September for failing to follow restrictions that were put in place after a 2014 complaint about his treatments. Dozens of women and girls, including 2000 Olympian Jamie Dantzscher, have filed civil lawsuits against him over allegations similar to the charges filed by prosecutors Wednesday.

Nassar was a longtime doctor for women and girls at Indianapolis-based USA Gymnastics, which trains Olympians. He has denied any abuse, and, in an email last fall to his Michigan State bosses, said, "I will overcome this."

A girl identified as Victim B, now 21, said she was "sexually assaulted by Nassar more times than she could count," Det. Sgt. Andrea Munford wrote in an affidavit.

"Victim B stated that she and all the gymnasts trusted Nassar and that he was like a god to the gymnasts. ... Because it was happening to all of them, they thought it was normal," Munford said of abuse.

In two separate criminal cases filed in 2016, Nassar is charged with possessing child pornography and molesting the daughter of family friends. Those cases are pending.

"He would put his fingers inside of me, move my leg around," Dantzscher said. "He would tell me I was going to feel a pop and that that would put my hips back and help my back pain."