Dmitry Muratov from Russia and Maria Ressa, a journalist from the Philippines, won Friday's 2021 Nobel Peace Prize for their struggle for freedom of expression in countries that have seen persistent harassment, intimidation and even murder. 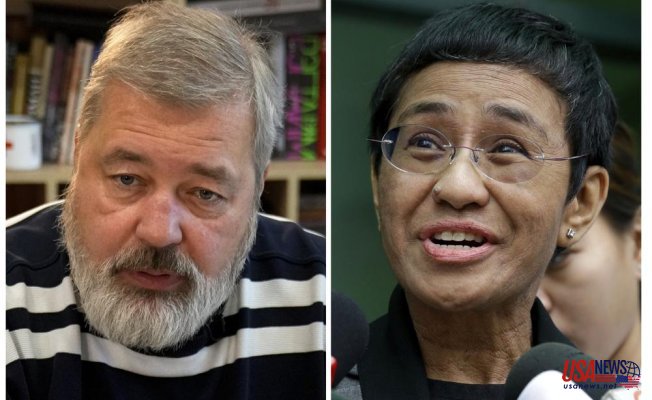 Ressa and Muratov were recognized for their courage and were also considered representatives of all journalists who advocate this ideal in a world where democracy and freedom are increasingly threatened," stated Berit Reiss Anderson, chair of The Norwegian Nobel Committee.

Ressa co-founded Rappler in 2012, a news site that was critical of President Rodrigo Duterte’s "controversial and murderous anti-drug program" in the Philippines.

Rappler and she "have also documented the use of social media to spread fake news and harass opponents, and manipulate public discourse," it stated.

Muratov was among the founders of Novaya Gazeta in 1993, an independent Russian newspaper. The Nobel committee called it "the most independent newspaper today in Russia" and "the most critical newspaper in Russia today."

It stated that the newspaper's journalistic integrity and fact-based journalism have made it an important source for information about censurable aspects in Russian society, which are rarely covered by other media.

Ressa was the first Filipino woman to win the Nobel Peace Prize and was convicted of libel . She was sentenced to prison in a decision that was significant blow to global freedom.

Ressa, who is currently on bail and facing seven legal cases, stated that she hopes the award will strengthen investigative journalism, "that will hold those in power accountable."

She told The Associated Press that she was subject to harassment and intimidation from "unending" people in the Philippines.

She also cited Facebook and other social media giants as a threat to democracy, saying that they "actually prioritized the spreading of lies laced in anger and hatred over facts."

"I was not sure that the things we are going through would attract that much attention." She said that the fact it got attention shows how important the battles are. This is how our elections will look next year. It's a fight for facts. Journalism is activism when you are fighting for facts.

Muratov (59) told reporters that he views the prize as an award for Novaya Gazeta journalists, contributors, and those who were killed. This includes Anna Politkovskaya who reported on Russia's bloody conflict with Chechnya.

He said, "It's recognition of the memory our fallen colleagues,"

Muratov stated that the Nobel Peace Prize was not awarded posthumously because they had come up with this to ensure Anya could accept it but through other, more qualified hands. He was referring to Politkovskaya.

The Committee to Protect Journalists reports that 17 journalists were killed in the Philippines over the past decade, and 23 in Russia.

Muratov stated that he would use a portion of the 10,000,000 Swedish Kronor (more than $1.14million) prize money to support independent media, a Moscow hospice, and children with spinal muscular issues.

Mikhail Gorbachev, a former Soviet leader and 1990 Nobel Peace Prize winner, used some of his award money for Novaya Gazeta. On Friday, he congratulated Muratov, calling him "a wonderful journalist, brave, and honest, and my friend."

Dmitry Peskov, a Kremlin spokesperson, also praised Muratov for being "talented" and "brave" and having "consistently worked in accordance to his ideals."

Mikhail Ulyanov (Russia's envoy at international organizations in Vienna) tweeted that Novaya Gazeta’s editorial policy "has not to do with strengthening peaceful" and that "such controversial choices diminish the Prize's value."