A sewage spill that originated in Mexico dumped more than 140 gallons of raw waste into the Tijuana River, flowing into California for two weeks before it was finally stopped. Local authorities had to actively inquire about the stench in certain neighborhoods... 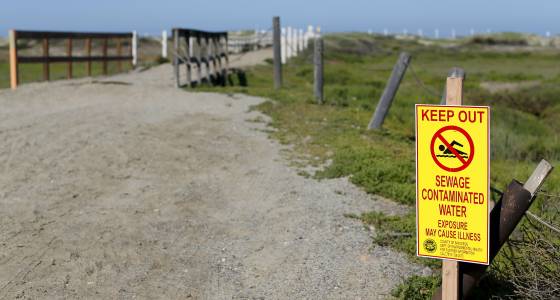 A sewage spill that originated in Mexico dumped more than 140 gallons of raw waste into the Tijuana River, flowing into California for two weeks before it was finally stopped. Local authorities had to actively inquire about the stench in certain neighborhoods before information about the spill was released, reports said.

The spill began Feb. 2 while maintenance was performed on a sewage collection pipe, a report released Friday by the International Boundary and Water Commission said. It was finally contained two weeks later after millions of gallons of waste had already made it into the water. The Tijuana River runs downhill from Mexico into the United States before draining into the Pacific Ocean, exacerbating the ability of pollution to run into the ocean.

Serge Dedine, mayor of Imperial Beach, California, said he had to send a written inquiry to the International Boundary and Water Commission before any information about the spill was released, the Associated Press reported. Numerous beaches in San Diego County were affected by the spill, but they had already been closed due to runoff from the recent storms that pummeled the area.

“Border authorities charged with managing sewage infrastructure and reporting these spills must do better and be held accountable for this act,” he said in a statement Saturday. Dedine also called for the resignation of Edward Drusina, chief of the International Water Commission.

Spills occur often in the Tijuana River though February’s was the largest in recent memory, the San Diego Union-Tribune reported. The blame for most spills rested on old, crumbling infrastructure in Tijuana as well as limited plumbing in the region.

“It’s outrageous that we have sewage spills of this magnitude occurring under the watch of the IBWC,” Matt O’Malley of the environmental group San Diego Coastkeeper, told EcoWatch.  “And it’s equally outrageous there aren’t proper procedures in place to notify the public when sewage releases occur.”

At first glance I thought how terrible ....Then I seen it was California who doesn't want border control and YAWNED !!!!!!