The idiocy of accusing Trump of anti-Semitism

WASHINGTON — Among political elites, speculating about President Trump’s mental health has become a parlor game. While those who support him consider such talk simply a political smear, his critics find it a realistic and scary possibility that... 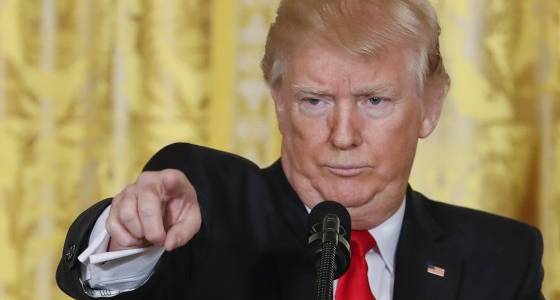 WASHINGTON — Among political elites, speculating about President Trump’s mental health has become a parlor game. While those who support him consider such talk simply a political smear, his critics find it a realistic and scary possibility that he is mentlaly unstable. Here’s another worrisome thought: Trump’s detractors have already become unhinged.

The “anti-Semitic” slander against Trump is a classic case study.

Seeking a question from “a friendly reporter” during his first solo White House news conference, Trump looked around the East Room before settling on 30-year-old Jake Turx, an untested rookie on the beat who covers politics for an obscure Orthodox Jewish weekly based in Brooklyn.

Perhaps Turx’s beard, yarmulke and Hassidic curls suggested an ally in Trump’s mind. And he did get a friendly question, or, rather, he got a professional question asked in a friendly way. Turx prefaced his query by saying, “I haven’t seen anybody in my community accuse either yourself or anyone on your staff of being anti-Semitic. We understand that you have Jewish grandchildren — you are the zayde.”

The president smiled at the affectionate Yiddish term for grandfather and said, “Thank you,” as Turx continued to the heart of his question: How was the administration responding to a reported uptick in anti-Jewish hate crimes across the country, including numerous bomb threats to synagogues and the vandalizztion of a Jewish cemetery in suburban St. Louis?

Trump lost it instantly. Like a hyperactive kid without his Ritalin, Trump said he “hated” the question, accused the reporter of lying to get the floor, told him to “sit down,” then said “Quiet! Quiet! Quiet!” when Turx tried to say he’d never even hinted the president was anti-Semitic.

“Number one, I am the least anti-Semitic person that you’ve ever seen in your life,” Trump said. “Number two, racism: The least racist person.”

Even for Donald J. Trump, it was a performance of astonishing tackiness. Yet, it was followed, as his bloopers always are, by even more fatuous defamations aimed at the president from his critics.

On Presidents’ Day, 11 bomb threats were phoned in to Jewish community centers around the country, the fourth spate of such apparently coordinated psychological attacks against American Jews in 2017. This time, Trump spoke out forcefully.

“The anti-Semitic threats targeting our Jewish community and community centers are horrible and are painful and a very sad reminder of the work that still must be done to root out hate and prejudice and evil,” he said, after visiting the National Museum of African American History and Culture on Tuesday. “This tour,” the president added, “was a meaningful reminder of why we have to fight bigotry, intolerance and hatred in all of its very ugly forms.”

In another universe, one where hyperpartisanship didn’t rule every aspect of domestic politics, Trump’s critics would have expressed gratitude that he spoke out — even if they’d preferred that he had done so earlier — and taken heart that his Justice Department had said it was investigating, and that Trump’s vice president had added a trip to Dachau to his schedule during a European visit. But we don’t occupy that universe.

“The president’s sudden acknowledgement is a Band-Aid on the cancer of anti-Semitism that has infected his own administration,” a man named Steve Goldstein wrote on his Facebook page. “His statement today is a pathetic asterisk of condescension. Make no mistake, the anti-Semitism coming out of this administration is the worst we have ever seen from any administration.”

Goldstein is the executive director of a small nonprofit called the Anne Frank Center, which bills itself as a “progressive voice for social justice.” Its website dutifully promotes the predictable slogans: “Black Lives Matter,” “Love Is Love,” and the view that “Islamophobia” is the nation’s problem when it comes to immigration laws, not our vetting procedures. In 2016, under Goldstein’s aegis, it changed its name to the Anne Frank Center for Mutual Respect, but that deference does not extend to Republicans. The center’s staff has been trolling Republicans online since Trump’s election. Their litany of slanders and viewpoints is familiar: Attorney Jeff Sessions is a “racist,” White House aide Steve Bannon is an “anti-Semite,” Elizabeth Warren is a hero, Trump’s travel ban is an outrage. The usual suspects.

Until now, it didn’t get much traction. But Goldstein’s “cancer of anti-Semitism” attack landed him an appearance on CNN, where he called Trump “pathetic” and said it was clear that White House staffers had “forced” Trump to speak out. Turning to Trump supporter Kayleigh McEnany, CNN anchorwoman Erin Burnett parroted Goldstein’s talking points, adding some of her own.

“For those willing to give the president a fair chance, you would have heard him condemn anti-Semitism,” McEnany responded. When she asked Goldstein if he really thought the president had animus against Jews, which would entail his own daughter, son-in-law and grandchildren, Goldstein started yelling, pointing his finger at her, leaning into her space, and accusing her of using “talking points” to bring up the president’s family. “That is a disgrace,” he said. “Have you no ethics?”

I feared for a moment that he was going to hit poor Kayleigh, but the sad truth is that such discourse has become de rigueur in this country. I don’t need to go to the Anne Frank Center website to find it; my own Facebook page is full of it, too.

But can Trump’s critics really think they are helping their own cause by being so intemperate? My own view is that grossly exaggerating the flaws of Trump and his enablers takes them off the hook. Stephen Miller, the young White House aide who helped botch the rollout of the White House immigrant ban, followed up that performance by beclowning himself on the Sunday talk shows. “The powers of the president to protect our country are very substantial and will not be questioned,” he said.

Isn’t that enough to work with? Not for the today’s hyper-left Democrats. The Daily Kos, a go-to website for progressives, posted a picture of Miller buttoning his sports coat and claimed he was flashing a secret “white power” sign favored by white supremacists.

The website described Miller as “an avowed racist,” which is untrue, and offered up this factoid as evidence that he’d know a secret sign favored by California prison gangs: “Stephen Miller is from California.” That’s not evidence. It’s lunacy. Miller is Jewish, incidentally. He wouldn’t be allowed to join the Aryan Brotherhood if he wanted to.

When it comes to Trump’s staff, deranged hatred of Miller is surpassed only by liberals’ feelings about Steve Bannon. Earlier in the week, Bannon and White House Chief of Staff Reince Priebus tried to quell media reports of a bitter rivalry by appearing together at CPAC and denying a rift — or even a power struggle. Maybe it was an act, but most observers thought they seemed comfortable together. Not the New York Daily News. The dependably anti-Trump newspaper found a couple of “body language experts” to decipher what really occurred. One of them claimed that when Bannon patted Priebus’ thigh, it had “a sexual feel to it.”

The other, while more supportive of the mismatched Trump aides, said, “Look where their hands are — they’re covering their private parts. That means they feel vulnerable.” Can anyone blame them?