Malaysia's health minister said Sunday autopsy results suggested a nerve agent caused "very serious paralysis" that killed the exiled half brother of North Korea's leader, as police completed a sweep of the budget terminal where he was poisoned... 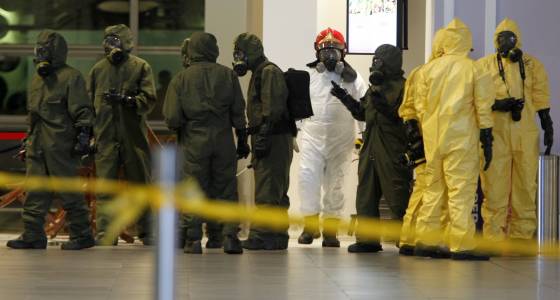 Malaysia's health minister said Sunday autopsy results suggested a nerve agent caused "very serious paralysis" that killed the exiled half brother of North Korea's leader, as police completed a sweep of the budget terminal where he was poisoned and declared it safe of any toxin.

Health Minister Subramaniam Sathasivam said the state chemistry department's finding of the VX toxin confirmed the hospital's autopsy result that suggested a "chemical agent caused very serious paralysis" that led to death "in a very short period of time." The VX agent can lead to death very quickly in high doses, he said.

Tens of thousands of passengers have passed through the airport since the apparent assassination was carried out. No areas were cordoned off, and protective measures were not taken. Subramaniam said there have been no reports so far of anyone else being sickened by the toxin.

The sweep started around 2 a.m. Sunday involving officers from chemical, biological, radiological and nuclear teams, as well as the fire department's hazardous materials unit and the government's atomic energy board. Although VX is not radioactive, police said the radiological team and the atomic energy board were involved as a precaution.

In the hour before and after Kim Jong Nam was supposed to fly from Malaysia to Macau at 10 a.m. on Feb. 13, nearly 200 flights were scheduled to fly to or from Kuala Lumpur. Flights from nearby Singapore, more than a dozen. Arrivals from airports all over Southeast Asia. Flights to Qatar, Australia,...

In the hour before and after Kim Jong Nam was supposed to fly from Malaysia to Macau at 10 a.m. on Feb. 13, nearly 200 flights were scheduled to fly to or from Kuala Lumpur. Flights from nearby Singapore, more than a dozen. Arrivals from airports all over Southeast Asia. Flights to Qatar, Australia,...

Abdul Samah Mat, the police official leading the investigations, said a two-hour sweep by more than a dozen officers in protective gear detected no hazardous material. He said the budget terminal is "free from any form of contamination of hazardous material" and declared it a "safe zone."

Earlier Saturday, police warned they would issue an arrest warrant for a North Korean diplomat if he refuses to cooperate with the investigation.

Experts say the nerve agent used to kill Kim was almost certainly produced in a sophisticated state weapons laboratory and is banned under an international treaty. But North Korea never signed the treaty, and it has spent decades developing a complex chemical weapons program.

Malaysia said earlier that Hyon Kwang Song, a second secretary at the North Korean Embassy in Kuala Lumpur, was wanted for questioning. But authorities acknowledged at the time he has diplomatic immunity and they couldn't compel him to appear.

Abdul Samah, the police official, said authorities would give the diplomat reasonable time to come forward. "And if he failed to turn up ... then we will go to the next step by getting a warrant of arrest from the court," he told reporters.

Lawyer Sankara Nair, however, noted that diplomats have immunity privileges even in criminal cases. "Police can apply for a warrant, but it can easily be set aside by the embassy," he said.

Malaysia hasn't directly accused the North Korean government of being behind the attack, but officials have said four North Korean men provided two women with poison to carry it out.

The four men fled Malaysia on the same day as the killing, while the women — one from Indonesia and the other Vietnamese — were arrested.

Abdul Samah said that the Indonesian woman, Siti Aisyah, vomited in a taxi on the way from the airport after the attack but was fine now. He said that more tests were needed to determine if the two suspects were given antidotes so the nerve agent wouldn't kill them.

On Saturday, representatives from the Indonesian and Vietnamese embassies in Malaysia met with the two women.

Indonesia's deputy ambassador Andriano Erwin told reporters that Aisyah said she had been paid the equivalent of $90 for what she believed was a harmless prank. Aisyah, 25, said she had been introduced to people who looked like Japanese or Koreans who asked her to play a prank for a reality show, according to Erwin.

Asked if she knew what was on her hands at the time of the attack, Erwin said: "She didn't tell us about that. She only said that it's a kind of oil, baby oil, something like that."

In grainy surveillance footage, the women appear to smear something onto Kim's face before walking away in separate directions. Malaysian police said the attackers knew what they were doing and had been trained to go immediately to the bathroom and clean their hands.

Experts say the women must have taken precautions so the nerve agent wouldn't kill them.

Also Saturday, police confirmed that a raid earlier in the week on a condominium on the outskirts of Kuala Lumpur was part of the investigation. Abdul Samah said the condo was rented by the four North Korean suspects who had left the country. He said police were still testing a seized substance for traces of any chemicals.