Police in New Zealand have suspended the search for the bodies of two people still missing after a volcanic eruption on the island of White Island on 9. decembe 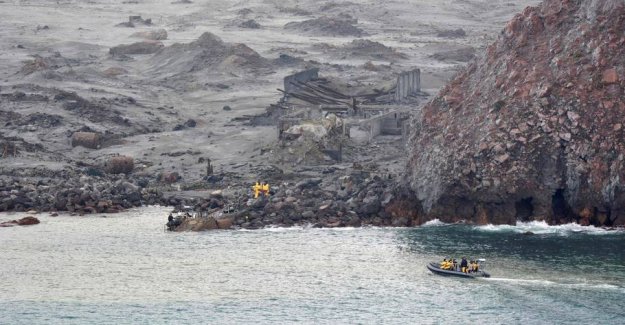 Police in New Zealand have suspended the search for the bodies of two people still missing after a volcanic eruption on the island of White Island on 9. december.

the Decision was taken following an extensive search has been in progress on and around the volcanic island for the past two weeks.

It says inspector Andy McGregor in a statement on Tuesday.

the Search for the two missing people - a 17-year-old girl from Australia and a 40-year-old guide from New Zealand - was revised down already in the last week, when it emerged that the police suspect that the bodies of the two are driven to the sea.

the Message from inspector Andy McGregor come, the day after the death toll following the eruption of the volcano rose to 17, after that yet another person had died of his injuries.

With the two missing presumed in a total of 19 people have died as a result of the natural disaster.

There were 47 people, including many tourists from Australia, on the White Island when the volcano erupted Monday the 9. december in the afternoon local time.

According to the new zealand ministry of health and 13 people are still admitted in hospitals in New Zealand with severe burns, while 13 others have been transferred to hospitals in Australia.

Nine of the 13 persons, who are being treated for their injuries in New Zealand, remains in critical condition.

After the volcanic eruption, it has been criticized that tourists were allowed to move around the active volcano.

Prime minister, Jacinda Ardern, has indicated that the new zealand labour inspectorate has started an investigation of the matter.

the Monitoring should find out why the tourists were not advised not to take out to White Island.

the Survey may be to place responsibility for the accident. And in the end it could send any perpetrators behind bars for up to three years.