Drove the bus into the muslim parade: Now is he doomed

A 57-year-old man drove 10. september last year, a 3A-bus into a large muslim procession in the Nørrebro district, while three ordensvagter ran backwards in fro 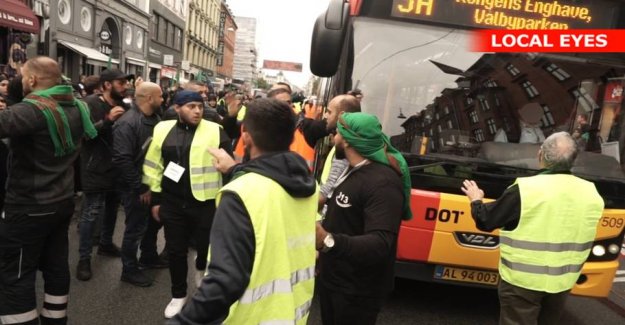 A 57-year-old man drove 10. september last year, a 3A-bus into a large muslim procession in the Nørrebro district, while three ordensvagter ran backwards in front of the bus and tried to get it to slow up.

It has now cost him a sentence of 60 days imprisonment, a fine of 2000 crowns, disqualification from driving for a year and 80 hours of community service.

- My first thought was 'terrorist attack', told a witness in court Thursday before the verdict was handed down.

- I thought that people's lives were in danger, said the witness.

the bus Driver refused itself through the whole matter guilty.

Defending Michael Harms, had after the judgement no comments.

- nothing more than that we will make use of our reflection with regard to whether we should appeal the case, he said to Ekstra Bladet.

Prosecutor Martin Strøbæk went after to get known the now former bus driver guilty of violence of a particularly dangerous nature. But the court found him guilty of intentional fareforvoldelse against the three ordensvagter.

the Defendants said in court that during the incident, were afraid and did not dare to stop the bus, and that he was ready to brake, if one of the three men should fall.

the Driver feared that the demonstrators would storm the bus. He did not know that there would be a demonstration on Nørrebrogade, and drove, therefore, wrong.

In all, four witnesses were questioned on Thursday; a bus driver, who was in the bus together with the defendants, and the three ordensvagter.

the bus Driver told the first that he saw the situation as perilous, and he judged that the bus drove in the 'walking pace'. When the prosecutor showed a video of the incident for the court, acknowledged the witness, however, that the bus ran faster than he thought.

The three guards that were in front of the bus, gave everyone expressed that they experienced the situation as violent, and that they felt themselves in danger.

Under the vidneafhøringerne avoided defendants eye contact with the witnesses and stared alternately down at the table in front of him or out in the air. Also, since the judgment was rendered, he was taciturn, and there was no response to trace in his face.

Since the court was raised, alternated the defendants, however, a long glance with his companion, who with his wife had turned up in court to provide moral support.