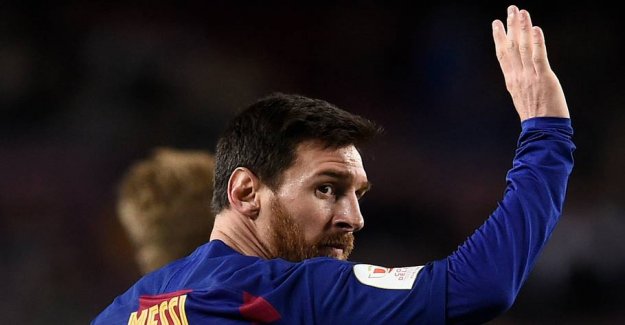 There is trouble in the FC Barcelona.

Lionel Messi is acidic on the sports director Eric Abidal, and the conflict between the two dominates the great Spanish sportsaviser Wednesday.

The two kamphaner adorn Mundo Deportivos home. Messi against Abidal sounds the easily understood title, while the Madrid newspaper AS calling the Barcelona of the Caos FC.

Mundo Deportivos home
the Reason for the current conflict is an interview, as Eric Abidal made with the newspaper Sport.

Here attacked the Barcelona sportsdirektøren out after the players, which he indirectly held responsible for the dismissal of coach Ernesto Valverde.

- Many players were neither satisfied or worked hard enough. And there was also an internal communication problem, said Abidal in the sensational interview with the Sport.

There was only 87 minutes, before Lionel Messi responded on Instagram. In a story on social media, he told his over 143 million followers, what he thought about Abidals interview.

Honestly, I don't like these things, and I think that people must take responsibility for their jobs and their own decisions.

- Players are responsible for what happens on the field, and we are the first to admit when we have not been good.

- Those responsible in the sporting department must also take their responsibility - above all for the decisions they make, wrote Lionel Messi, who had made a screenshot of Abidal-the interview and put a red circle on the sportsdirektørens statement, that many players were neither satisfied or worked hard enough.

Screenshot from Lionel messi's Instagram
Lionel Messi is quite clearly not agree with his former team-mate.

He stood behind Ernesto Valverde and feel according to, among others, ESPN's sources, that is unfair that he gets some of the blame for the sacking of the coach.

Valverde got kicked in the middle of January after the defeat to Atlético Madrid in the semi-final in the Spanish Super Cup.

Eric Abidal puts not the name of the Barcelona players, which he criticizes in the interview with the Sport, and it annoys Messi.

- When you talk about players, you need to put the name on it. If you do not, then the inks you all to and give nourishment to the rumors that are not true, writes the 32-year-old argentine world star.

According to Cadena Ser is Messi tired of being attributed to power in the FC Barcelona, which he has not. The radio station also points out that Abidal and Messi previously had a strained relationship.

Lionel Messi and Eric Abidal was years back teammates in FC Barcelona. Photo: Gustau Nacariono
the Question is, are the latest trouble for the significance of verdensstjernes future in the Spanish team.

He has a contract until the summer of 2021, but interestingly enough, there is a clause in the agreement that makes it possible for Messi to leave FC Barcelona after the season.

And mind you, without that Barça can claim the money for him.

In the interview with Sport tells Abidal, to contract negotiations with Lionel Messi is in time, and the French singer hope that Messi will sign a longer contract with Barcelona.

- I'm optimistic. I think that we will agree with a deal with Leo. He knows that Barça need him.

See also: Trouble in Barcelona: Messi reaches out for the management