Two unique "flotation therapy" tubs weighing a hefty 100 pounds apiece were stolen from a Naperville-area spa, the owner of the Annica Float Club said.There are only five of the tubs in existence, according to Lindsay Reinhardt, whose 4S100 N. Route... 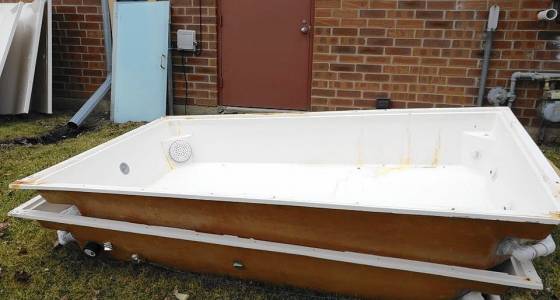 There are only five of the tubs in existence, according to Lindsay Reinhardt, whose 4S100 N. Route 59 business offers flotation therapy, sensory deprivation and relaxation services. And while they were being replaced as part of an ongoing remodeling project, Reinhardt said she needs them as evidence in a lawsuit against the tubs' manufacturer.

The tubs were taken sometime between 1 and 9 a.m. Thursday, Reinhardt said. They were outside because of the remodeling and the thieves left little behind in the way of evidence, other than "some tire marks in the grass," she said.

Reinhardt said the tubs are made of white fiberglass, and are 8 feet long, 5 feet wide and 15 inches deep. They have "exposed PVC plumbing pipes (and) rust stains on all the sides, and there were small stress cracks in the corners," she said.

A report was filed with Warrenville police, who have jurisdiction in the area, Reinhardt said. They did not return calls for comment on the case.

Curiously, the thieves left two identical tubs behind, along with other fixtures and amenities that also had been temporarily moved outside, Reinhardt said.

The stolen tubs were two "of approximately five that exist in the entire country, so they cannot be mistaken for another item," Reinhardt said. They are crucial pieces of evidence in a breach of contract lawsuit Anicca filed against the manufacturer "for not upholding his warranty, and we need them back," she said.

"We have our suspicions" about who the thieves might be, "but we don't think it has anything to do with the lawsuit," Reinhardt said. "It doesn't seem random. It was probably somebody who wanted a free tub for personal use, or to install" them in another business, she said.

"They require two people to move, and they aren't easy to hide," Reinhardt said. "You couldn't see them from the street, and (the thieves) obviously would've had to show up with a large box truck or a flatbed."

Anicca has four custom-built sensory deprivation tanks, making it one of the largest of the approximately 400 "float centers" in the United States.

Clients float in a highly salt-saturated water mixture heated to the typical outside body temperature. Research suggests that by reducing outside sensory input, the brain and the rest of the body quickly go into a meditative, restorative state.