RICHMOND HEIGHTS, Ohio -- One night after holding a public hearing on the subject, City Council approved legislation that will allow all forms of the medical marijuana business to operate in the city. More than 50 people attended the public hearing held Monday... 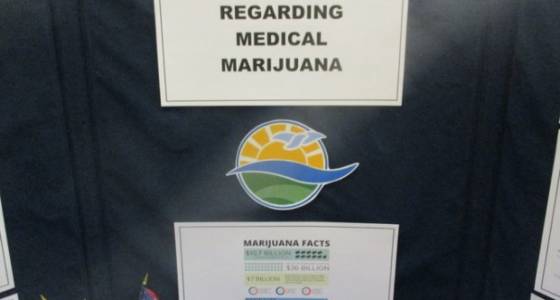 RICHMOND HEIGHTS, Ohio -- One night after holding a public hearing on the subject, City Council approved legislation that will allow all forms of the medical marijuana business to operate in the city.

More than 50 people attended the public hearing held Monday evening, which was held conjunction with public hearings on legislation that will broaden the uses permitted at Richmond Town Square mall, and mandate the lighting of lots and building entrances at commercial sites that are no longer in operation.

"People were concerned about safety in having this (proposed medical marijuana) building in the city," said Economic Development Director Christel Best of Monday's hearing. "(State Sen.) Kenny Yuko (D-25, of Richmond Heights) was there talking about the strong vetting that takes place in this industry and how safe it is going to be."

Present at Monday's hearing and Tuesday's meeting was Ronald Hudson, of Mayfield Heights, a Marine veteran who believes strongly in the benefits of medical marijuana. Hudson's Mr. McGooz Cannabis Products company is planning to seek permits from the state of Ohio to operate in all three phases of the medical marijuana business -- cultivation, processing and dispensing -- in Richmond Heights.

Hudson's group is permitted and operates in the state of Illinois, and he said that operations will soon resume in Michigan and begin in California and Nevada. Hudson said his group of investors has  put up about $3 million and is set to open a large operation at the former di Borally party center, 27227 Chardon Road.

When previously speaking at a council committee meeting, Hudson stated a plan to buy one of the two di Borrally buildings. He said Tuesday that plans now call for purchasing both to allow for expected expansion.

"We're going to have cultivation, processing, a full dispensary, a teaching center and doctors offices," Hudson said. "We're also planning to have a laboratory (under the name ACT Laboratory), maybe at the (Cuyahoga County) Airport site. This is going to be big for Richmond Heights."

Best said there is not currently an estimate as to how much tax money the city expects to reap from the medical marijuana business.

A Highland Heights resident asked Hudson at Monday's hearing if he would be willing to sign a statement saying recreational marijuana would never be sold at his business.

In reply, Hudson said on Tuesday, "We're only permitted for medical use in all of the states. That's all we do. There hasn't been a medical marijuana permit that has been extended to recreational use in any state."

Hudson said that parents should not be concerned that their sons and daughters will be able to purchase his Mr. McGooz' edible products, which include candy, syrup and other foods enhanced by marijuana for medical purposes. Security will be tight and a key card will be necessary to make any purchase.

The state-issued key card would be swiped like a credit card.

"We want that card to have on it the person's ID, and we want it to track how much medicine that person has bought, and also where the money goes from that purchase. We don't want to deal in cash."

"First and foremost," he said, "I want to make it clear that the legislation under consideration (passed later Tuesday night) is exclusively related to medical marijuana. There is no provision in this legislation for recreational use and the organizations with which we have been in discussions are neither currently involved with, nor particularly supportive of recreational use."

Kumin went on to state his belief that medical marijuana will make "a tangible difference in the community."

"For me, this is one of the very first times I feel like I have been a part of something that I can truthfully say has the potential to significantly and positively influence the city's fortunes for years to come," Kumin read from his statement.

"For that, I am gratified by the open-minded vision of my colleagues, thankful for the commitment and enthusiasm of ACT's investors in choosing Richmond Heights, and hopeful for the future this investment may inspire."

Hudson said his group will immediately apply for permits with the state to conduct all phases of the medical marijuana business. The state will consider applications, which require a $30,000 non-refundable down payment, in May. In addition to the down payment, Hudson said permits range in annual cost from about $5,000 for a dispensary, to about $180,000 for cultivating.

If all goes as he hopes, Hudson said his business, which will likely go by a new name, could be in operation sometime between May and September, 2018. Hudson said his investors, which include two Cleveland Clinic doctors, are serious in that they know a return on their investment isn't likely to come about for approximately eight years.

Further, Hudson said Mayor David Roche and Yuko have been working with him, and that RHPD CHief Gene Rowe has been developing a security plan for the business.

"I'm optimistic that the state of Ohio will OK us," he said of getting permits granted.

Hudson said he does not know of any other potential permit seeker that attended Monday's hearing.

According to Best, there have been a "handful" of other interested permit seekers who have been in touch with her.

Council also approved at its Tuesday meeting, without opposition, the ordinances pertaining to expanding mall uses and the illumination of closed businesses.

In other Richmond Heights news:

-- The city will hold another two public sessions for residents interested in helping to develop Richmond Heights' upcoming master plan.

Residents can attend sessions to be held at 2 and 7 p.m. March 15 at the Kiwanis Lodge at Richmond Heights Community Park, off Highland Road.

Work there is being done on a 54-inch water main that transports water throughout the city. Orange barrels there have limited to one lane traffic on northbound Highland Road.