A Cazadero woman survived a harrowing night in the middle of a swollen creek in western Sonoma County after she drove off Cazadero Highway and became trapped in her car for eight hours before being rescued early Saturday morning. Victoria Trautvetter, 67,... 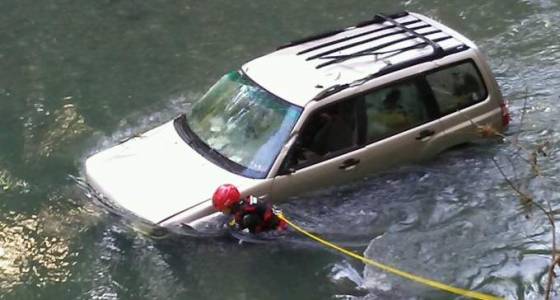 A Cazadero woman survived a harrowing night in the middle of a swollen creek in western Sonoma County after she drove off Cazadero Highway and became trapped in her car for eight hours before being rescued early Saturday morning.

Victoria Trautvetter, 67, drove off the windy two-lane road near Hahn Road about 11:45 p.m. Friday, striking several trees as her Subaru plunged down the bank and overturned once before landing on its wheels in Austin Creek.

That was Trautvetter’s first stroke of luck. Her second was timing. A week ago, Austin Creek was a raging torrent of floodwater, with enough force and depth to submerge a crashed car in a seconds, firefighters said.

“If this would have happened last week when the creek was really running, she’d have gone under,” said Monte Rio Fire Chief Steve Baxman, who was on hand Saturday.

But it was the woman’s own actions and calm that likely kept her from further harm, firefighters said.

Surrounded by rushing water in the dark, unable to discern exactly where she was in the stream, Trautvetter stayed put with her small dog, Jasper, climbing into the back of the vehicle to stay out of water that rose inside to nearly the steering wheel.

At one point during the night, she put on a dry change of clothes she happened to have with her to stay warm, firefighters said.

At daybreak someone spotted the vehicle and called for help, Baxman said.

He estimated the car had plunged about 20 feet down the bank and rolled about 10 feet into the middle of the creek.

About 8 a.m., two Cazadero volunteer firefighters, Gabe Barrio, 23, and Cory Olson, 46, — both on their first swiftwater rescue call since a recent certification course — donned their gear and waded out to the stranded vehicle.

Olson climbed in a side window to retrieve the vehicle’s key from Trautvetter. She had the presence of mind to pull it out of the ignition moments after the crash and had fastened it to a belt loop on her pants. But her hands had grown so cold by that time that she couldn’t get the chain back off.

“I asked her if she was hurt and she said ‘I’m just cold’” Olson said.

He and Barrio helped her out of the vehicle through the back hatch, which faced downstream and could be opened without further flooding the car. They fastened a lifejacket on the woman and, with her dog, helped her wade to shore and climb up to a waiting ambulance on the road.

Besides being chilled, her only complaint of pain was in her right shoulder, firefighters said. She was taken to Sebastopol for treatment, Baxman said.

“I was amazed at how calm she was,” Olson said. “I can only imagine how bad things would have gotten if she had tried to get out in the middle of the night with that current.”

West county tow truck driver John Yost, who was dispatched to the scene around 8:30 a.m. to retrieve the vehicle, called the ordeal a “double miracle.”