More than 1,500 line up for Porto's official grand opening in Buena Park 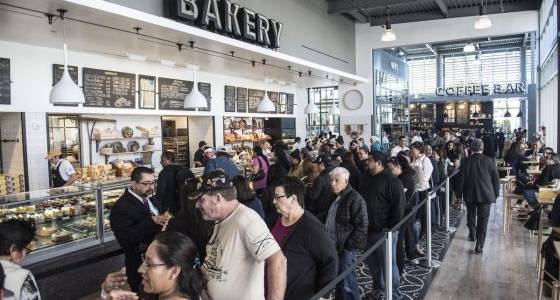 Look out Knott’s Berry Farm. With Porto’s Bakery & Cafe making its long-anticipated debut Wednesday in Buena Park, the city is now home to another big tourist attraction. Rivaling theme park lines for blockbuster rides, hundreds of fans stretched along a two-block section of Beach Boulevard to be the first to buy boxes of Cuban delicacies.

Crystal Loredo and her two cousins arrived first at 5 a.m. She came for the cheese rolls and potato balls. Porto’s three bakeries sell more than 2 million a month.

After an opening ceremony that included a speech by actor and family friend Andy Garcia, customers were finally let in around 11 a.m. At that point, the line had surged to more than 1,500 people, according to local police. The opening was “by far the biggest” turnout the Los Angeles institution had ever seen, said Betty Porto, whose mother, Rosa, founded the first cake shop in the early 1970s after the family fled communist Cuba.

“It’s crazy. I didn’t think there would be this many people,” said Caesar Hernandez, 40. The Anaheim resident was one of the few people in line who had never tried Porto’s. He arrived at 7:30 a.m. and walked out nearly three hours later.

Hernandez loaded up, buying a dozen cheese rolls, a sandwich, a slice of tres leches cake, a strawberry croissant and creme brulee.

“Everyone keeps telling me how good it is, so I guess I’ll find out,” he said.

Raul Porto Jr. said he and his family were heartened by the fans who showed up for the company’s first Orange County outlet. The Buena Park cafe is the chain’s largest at nearly 25,000 square feet.

“I can’t tell you how we felt to see you all,” he said during a pre-opening ceremony. “Finding a new location for us is like finding a home. We really found a good place.”

Garcia also gave a brief speech to cheering fans. As a fellow “Cuban exile,” he said he’s been going to Porto’s since 1978. Rosa and Raul Sr. kept the struggling actor well fed for years, he said.

“I’m a member of the Porto’s family through digestion,” he joked.

In a more political portion of his speech, Garcia said the Portos are an example of a hard-working immigrant family embracing the American dream. “It’s a testament to what people coming to America can do given the opportunity,” he said.

After Fidel Castro took power in Cuba in the 1960s, Rosa and Raul Porto lost their jobs at a cigar distribution warehouse. Raul Sr. was sent to a labor camp, forcing Rosa to fend for herself and their three children: Betty, Margarita and Raul Jr.

To feed her family, she started a black market cake business in her home. She risked being sent to jail for running a “free enterprise” business. It was a barter and trade operation. Neighbors paid her in government rations – pigs, chickens, rice and beans. For a decade the Portos lived under the fear of being caught before the family was approved to relocate to the U.S.

“She took a risk because it was either that or starve,” said eldest daughter Betty Porto, who runs all four cafes with her two siblings.

When Rosa landed in Los Angeles in 1971, family and friends began requesting her sponge cakes. She ran the business out of her home for the next five years, specializing in wedding and quinceañera cakes. When customers asked for appetizers for parties, she developed a menu of guava pastries, chicken empanadas, potato balls and meat pies.

In 1976, she opened her first brick-and-mortar shop. A business built out of desperation eventually grew to three cafes in Glendale, Burbank and Downey. As their Los Angeles fan base grew more diverse, the menu expanded to include elegant French pastries and cakes, sandwiches, croquettes and tarts.

Today, Porto's fan base rivals the legions of loyal customers who follow another local food institution: In-N-Out Burger. As it turns out, fans adore both brands for the same reason.

"It's so inexpensive for the quality. You can't go wrong," Suzanne Lee, 47, said as she waited at the back of the line at 11 a.m. (She made it to the order counter more than four hours later.)

Buena Park is Porto's first new bakery to open in seven years. A fifth bakery is coming next year to West Covina. Though the cafes combined serve 4.5 million customers a year, Raul Jr. said he and his sisters run them like a mom-and-pop operation. Like his parents, they treat everyone like family.

No one knows that more than Lydia Wong. The 72-year-old Lancaster resident has been a Porto’s customer since 1975 when she was a regular at the Glendale shop. On Wednesday, she drove two hours in bumper-to-bumper traffic to get to the Buena Park opening.

The family spotted her right away and made sure she was among the first customers to enter the store.

“Love is the secret to Porto’s,” Wong said. “Everything they do is with love.”