For More Chinese Firms, It Pays to Make It in the U.S.A.

A hefty U.S. import tax on goods produced in China could accelerate a trend already well under way: Chinese companies setting up factories and expanding in the U.S.Manufacturers in China face a host of pressures. Wages have risen substantially, while land... 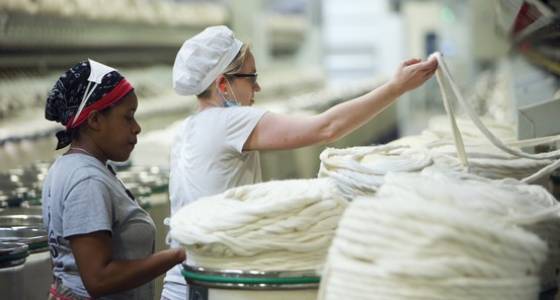 A hefty U.S. import tax on goods produced in China could accelerate a trend already well under way: Chinese companies setting up factories and expanding in the U.S.

Manufacturers in China face a host of pressures. Wages have risen substantially, while land and electricity prices are up. This challenges China’s decadeslong orthodoxy of producing mass-market goods at extremely low cost.

At the same time, Chinese companies that have saturated their home market are looking elsewhere for growth.

“Many Chinese firms have become so dominant in their domestic market that they are now forced to look beyond the Chinese borders,” said John Ling, Georgia’s managing director for investment in China and president of the Council of American States in China. Mr. Ling helps attract and facilitate expansion by Chinese companies in the state.

President Donald Trump has called for a rejuvenation of U.S. manufacturing, in an effort to boost employment. He campaigned on a promise to tax Chinese imports at roughly 45%, and House Republicans are proposing a border-adjusted system that would effectively tax all imports. Since his inauguration, the president has talked of taxing imports from Mexico. A White House spokeswoman said the administration had no comment on taxing Chinese imports.

Some firms are already well-placed should there be a rise in tariffs for Chinese goods.

Keer America Corp., a subsidiary of Keer Group Co., a textile producer from Zhejiang province in China, plans to invest $68.5 million in the first phase of a $218 million, five-year project to double the capacity of its yarn-spinning facility in Indian Land, S.C., said chairman Zhu Shanqing.

The facility has been in operation since mid-2015. Keer now employs 208 full-time, mostly line workers in the U.S. and plans to hire another 300.

“There are obvious cost advantages,” Mr. Zhu said. Electricity prices, for example, are up to 40% lower in Lancaster County than in Hangzhou, he said.

Chinese companies’ direct investment in new production facilities in the U.S., also known as “greenfield” investments, has increased rapidly over the last five years, with companies turning to capital-intensive operations such as manufacturing, said Thilo Hanemann, an economist at Rhodium Group LLC, a company that tracks Chinese spending abroad.

From 2000 to 2016, Chinese firms plowed $8.6 billion into 778 greenfield or new investments in the U.S., according to Rhodium Group. Last year, companies spent $1.4 billion on 34 greenfield projects, Rhodium said. That is down from the $1.8 billion spent in 2015, although Rhodium said the 2016 figure might climb once there is more clarity over the progress of large projects.

Lower costs, the ability to circumvent some trade barriers and the proximity to U.S. consumers all contributed to the rise in Chinese manufacturing investment, Mr. Hanemann said. “Higher tariffs and other market-access barriers would certainly increase the rationale for Chinese manufacturers to invest in a U.S. production base,” he said.

Beijing in November tightened currency controls on Chinese companies seeking to invest overseas, but Georgia’s Mr. Ling said that isn’t likely to have a significant impact on Chinese manufacturing investment in the U.S. The measures are particularly aimed at large acquisitions and investments in overseas entities unrelated to the investor’s core business.

In terms of manufacturing investment, “I see big momentum coming from China,” he said, especially given the potential threat of higher tariffs. Companies are paying “a lot of attention to” Mr. Trump’s statements, Mr. Ling added.

“We are currently looking at whether it makes sense for us to produce in the U.S.,” said Carolyn Wang, vice general manager at Shenghuabo Group Co. in Shanghai, an auto-parts supplier that operates four plants in China and exports to other markets, including the U.S.

“If [Mr. Trump] tries to raise the bar on imported products, he might also incentivize Chinese entrepreneurs to produce locally,” Ms. Wang said. She said if Shenghuabo were to open a plant in the U.S., it would be a highly automated facility with minimal laborers to keep costs down.

For others, moving production to the U.S. isn’t an option. Michael Crotty, president of MKT & Associates Ltd., a home-textile trading company based in Shanghai, said he would start sourcing curtains and other products from Vietnam, Pakistan or India should the U.S. introduce a 45% import tax on goods from China.

Because about 90% of curtains sold in the U.S. come from China, moving production to the U.S. isn’t feasible, Mr. Crotty said. It would likely take decades to build a supply chain with the economies of scale needed to produce curtains at prices competitive with China’s, he said.

However, one of the 10 China-based suppliers MKT works with is considering opening a plant in a southern U.S. state, he said. “That plant will be highly automatized,” Mr. Crotty said.

Coline Cabinetry NY Inc. set up shop in the U.S. to be closer to its customers, said Andy Hu, director of the Smithtown manufacturer of kitchen cabinets that originated in Shanghai.

Mr. Hu currently employs about 30 people in the U.S. and sells to retailers as well as consumers.

U.S. workers, he said, “are not cheap,” but the company saves on freight costs and other logistics expenses. He buys marble and granite from India and Spain and plywood from the U.S. However, other raw materials come from China.

“If there is an increase in [sourcing] costs, the sale price will rise, too,” Mr. Hu said.

Write to Nina Trentmann at Nina.Trentmann@wsj.com