The airline industry is waging a fierce battle with AT&T, Verizon and others over plans for 5G wireless service. They warn that thousands of flights may be delayed or grounded if rollouts take place near major airports. 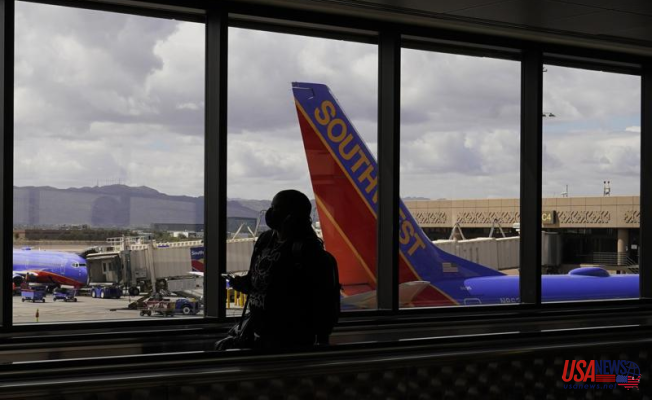 Chief executives of the nation's top airlines claim that interference from wireless service on key instruments on planes is more serious than they initially thought.

After two delays in the rollout of their 5G wireless service, AT&T and Verizon will activate it Wednesday.

The new 5G high-speed service uses a portion of the radio spectrum similar to the one used by altimeters. These devices measure the height of aircraft above ground.

Here's a summary from The Associated Press.

WHICH SIDE IS THE GOVERNMENT ON

C-Band can be safely used in close proximity to air traffic, according to the Federal Communications Commission. In 2020, the FCC established a buffer between C-Band and the 5G spectrum. This was to ensure that safety concerns are resolved.

Buttigieg, along with Stephen Dickson, the FAA Administrator, saw potential problems. They asked AT&T to delay activating CBand 5G in the vicinity of undetermined "priority" airports while the FAA carried out further research.

WHAT COMMUNICATIONS DID AT&T VERIZON MAKE?

They denied the claims. CTIA, a trade association representing the wireless industry, notes that around 40 countries have used 5G C-Band without any reports of interference with aircraft equipment.

However, John Stankey, AT&T CEO, and Hans Vestberg CEO at Verizon offered to lower the power of their 5G networks close to airports as France did.

They took steps to calm the federal officials but telecoms are still arguing with airlines. Since Christmas Eve, more than 10,000 U.S. flight cancellations were caused by bad weather and labor shortages due to COVID-19.

Vestberg stated in a Tuesday company memo that "while the airline industry faces many difficulties, 5G isn't one of them,"

HOW MANY PLANES HAS THIS AFFECTED?

The agreement will allow the FAA to conduct a survey in order to determine. The FAA will allow aircraft equipped with reliable, accurate altimeters to fly around high-power 5G. However, older altimeters won't be permitted to land in low-visibility areas.

WHAT WILL HAPPEN IN TWO WEEKS?

The FAA and companies will have two weeks to postpone the implementation of the agreement.

Verizon and AT&T will be permitted to launch C-Band services this month under their FCC licenses. The airlines can submit a list of 50 airports to the companies by Friday.

The telecoms will be in contact with the FAA, airlines and other interested parties about long-term plans for 5G service close to airports. According to the FAA agreement, AT&T will only be able to make any changes to service. Verizon and Verizon however will have the sole authority.

Vestberg stated in his memo that "We felt it was the right thing for the flying public which includes all of us to allow the FAA time to resolve its issues with aviation and avoid further inconvenience to passengers with additional flight delays."

Nicholas Calio was the president of the airline trade association. He expressed more concern about the agreement but thanked federal officials who reached the deal with AT&T, Verizon, and other carriers.

U.S. airlines have made safety their top priority. Calio stated that the company will continue to collaborate with all stakeholders in order to ensure that 5G can safely coexist with aviation.

The FAA released a short statement regarding the delay of two weeks, saying that it is looking forward to "using the additional space and time to reduce flight disruptions related to this 5G deployment."