For all intents and purposes, Donald Trump’s address to Congress on Tuesday is taking on the importance of a State of Union speech when it comes to U.S. financial markets.For investors relying on more than a year of campaign promises of a pro-growth... 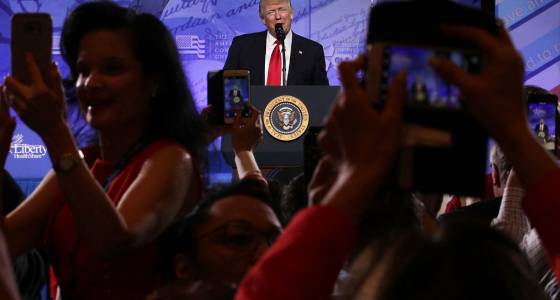 For all intents and purposes, Donald Trump’s address to Congress on Tuesday is taking on the importance of a State of Union speech when it comes to U.S. financial markets.

For investors relying on more than a year of campaign promises of a pro-growth agenda to push U.S. stocks to record highs, the dollar surging and bond yields climbing, the prime-time speech to House and Senate lawmakers couldn’t come any sooner.

“We need to see some details within all the policy talk,” said Sean Simko, who manages $8 billion in fixed-income assets at SEI Investments Co. in Oaks, Pa. “More specifics in terms of numbers or even a more defined timeline. If there aren’t specifics there, the risk trade might be ending.”

Trump will hike defence spending by $54B, White House says

Though new life was given to some faltering Trump reflation trades by the president’s promise of a “phenomenal” tax plan earlier this month, investors say more is needed, especially with the administration designating the repeal and replace of Obamacare as its first priority ahead of a tax overhaul.

While it isn’t considered a State of the Union address since it falls within Trump’s first year, the initial speech to Congress has been no less important to presidents in the modern era. Barack Obama first spoke before both legislative bodies in February 2009 about the financial crisis.

Since Trump’s election, stocks have showed few signs of slowing down. The S&P 500 has advanced 10 per cent, posting 17 record closes in a rally that’s added $2.8 trillion in value to the U.S. equity market. To be sure, fundamentals are playing a part in the market’s gains. The economy has shown signs of accelerating and corporate earnings are predicted to surge 12 per cent from last year, a turnaround from the profit declines in 2015 and 2016.

“It’s possible that if the market hadn’t been rising so dramatically, we could wait,” said Quincy Krosby, a market strategist at Prudential Financial Inc., which oversees about $1.3 trillion. “But this is a market that’s pretty impatient and wants results.”

Adding to the anxiety are differing views on how to proceed on tax reform. House Republicans are considering a border-adjustment tax proposal that shifts the burden from exporters to importers, arguing that it would benefit American manufacturing while providing revenue to make up for losses from reducing corporate-tax rates. Trump has called the plan “too complicated.”

As the debate grows, traders have reduced bullish wagers on the U.S. dollar. The greenback has dropped 3.3 per cent since January, after surging 6.5 per cent after the Nov. 8 presidential vote, according to the Bloomberg Dollar Spot Index. Hedge funds and other large speculators have cut net bullish dollar bets to the least since before the election.

“There is only so long the market will bid the dollar higher on the promise of something,” said Stuart Bennett, head of Group-of-10 currency strategy at Banco Santander SA in London. “They will want detail. And if it’s not forthcoming, then it’s a little bit like the boy who cried wolf.”

Complacency could be one of the biggest risks, according to John Canally, chief economic strategist at LPL Financial in Boston. The Chicago Board Options Exchange Volatility Index, a gauge of investor anxiety also known as the VIX, is only two points above its all time low. The VIX, which tracks implied volatility through S&P 500 options, is headed for the lowest yearly average on record.

“Everyone is wondering why equity market volatility is so low given the uncertainty out there,” said Canally. “The economy is not in dire need of a tax cut, but maybe his speech could be a catalyst” for an uptick in volatility, he said.

Not everyone is convinced. The rally in stocks has been driven by solid earnings and economic data in spite of growing skepticism over Trump’s policies, Tobias Levkovich, Citigroup Inc.’s chief U.S. equity strategist, wrote in a Feb. 24 note.

“Fears of a major pullback if President Trump does not outline a ‘phenomenal’ tax program on Feb. 28th may be overdone,” Levkovich said.

In the bond market, speculators are holding onto wagers on higher yields, and lower debt prices.

David Woo, head of global rates and FX strategy at Bank of America Merrill Lynch, said Trump’s desire for a tax plan before the August break means it is likely that the president lays out at least a “skeleton” of the program on Tuesday.

If Trump does provide more clarity on his tax and growth plans, that raises the risk that the Federal Reserve will be more willing to increase interest rates, Woo said. Traders currently assign about a 40-per-cent probability for a hike at the Fed’s March 15 policy meeting.

“There is a lot riding on Tuesday,” said Woo. “The consequences for some kind of plan being unveiled will be massive. You will see volatility really going through the roof if he does so.”