Will algorithms be the artists of the future?

It doesn't seem like they dream of electric sheep, but at the moment they paint pictures that are sold at art auctions, write poems, stories and the odd novel, draw illustrations, sculpt shapes, compose music. 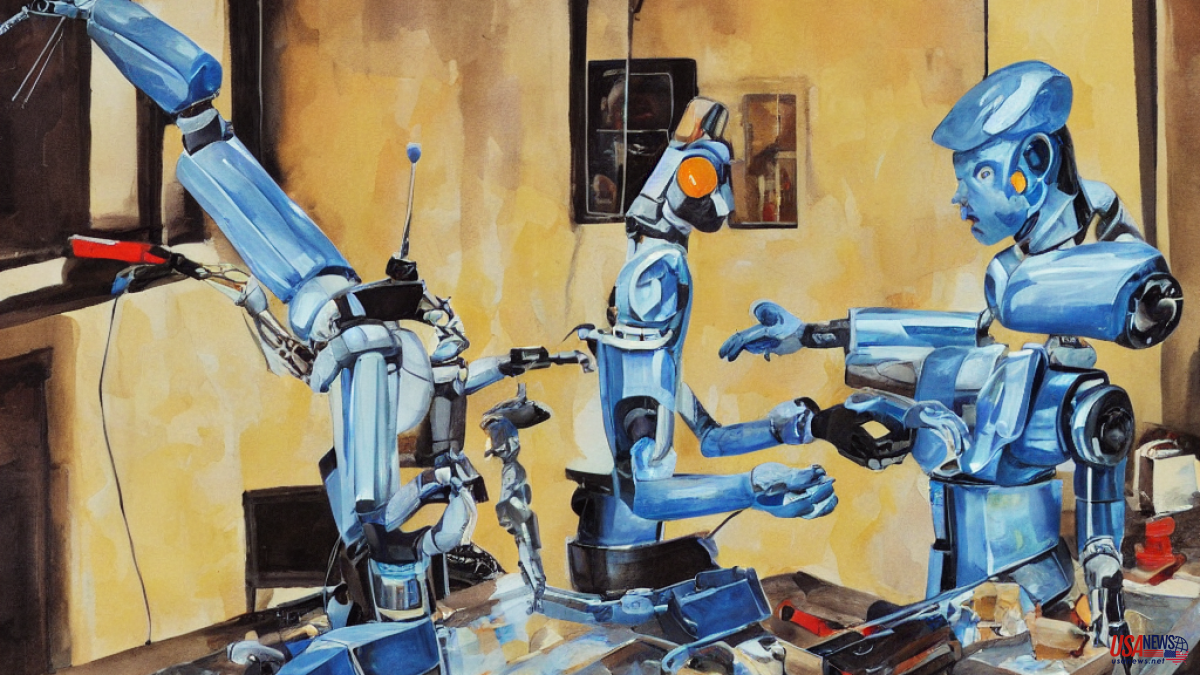 It doesn't seem like they dream of electric sheep, but at the moment they paint pictures that are sold at art auctions, write poems, stories and the odd novel, draw illustrations, sculpt shapes, compose music... Are algorithms (artificial intelligence) future artists? The current state of advances in this field opens the debate on a host of issues: authorship, the rights it generates, originality, creativity, what some call the soul...

Artificial intelligence (AI) is already capable of generating texts autonomously following indications (theme, style...) introduced by a human, and also images (tables and illustrations). It does it with simple tools, and names like GPT-3, Dall-E 2, Stable Diffusion, Midjourney... are becoming more and more familiar among those who dedicate themselves to writing or drawing.

Botto is one of the most sought-after artificial artists. It is an algorithm fed by the German Mario Klingemann, who takes it with dignity that his AI earns more money than he does as a human artist – in less than a year, it has already exceeded one million euros. He has exhibited at the Venice Biennale, New York, London, Madrid... and at the moment in the Etopia room (virtual and physical) in Zaragoza, which has installed giant screens to view his work. For his father, Klingemann, "AI is not a mere tool but a co-creator, a partner."

Last Tuesday, at the CCCB, the Colectivo Estampa (ie Roc Albalat, Pau Artigas, Marcel Pié, Marc Padró, and Daniel Pitarch) held a public demonstration of AI applied to literature. It became clear that there is no problem to create the back cover text of a novel (in this case, of science fiction), its title (Ocean holes: a fight for survival), draw the cover image, invent a face and a biography of its author, and even interview him with questions that the audience improvised. But, friend, what about the novel?

“AI is a tool that helps us to carry out various tasks – the components of Estampa respond, in their studio in the Gràcia neighborhood –, we train it with a lot of information, and it is capable of outlining an argument that the author could develop later”. "It is already used -Artigas specifies- to write brief and strictly informative journalistic articles about second or third division football matches, with the line-ups, the goals and the odd incident, or in stock market information" but without in-depth analysis or look author's own. “There are written novels –admits Albalat– but it is very difficult to sustain a plot and the characters for many pages in a legible way, unless it narrates a psychotropic experience or is very guided by humans. Even in stories, the fantastic comes out better than the realistic.”

In previous sessions, Estampa organized a verse fight between an AI and the poet Josep Pedrals and also an epistolary exchange between another AI and the novelist Irene Solà. In the CCCB's exhibition on Mars, they generated a fictional fauna of the red planet from images of 24,000 species that actually exist on Earth.

Although the romantic idea of ​​the creator is in crisis, the truth is that the problems of the AI ​​that write are several: the texts are not complex, they have to be brief, the sentences are simple and the structures are linear. And they reproduce the prejudices of those texts with which the algorithm has been fed (if we use the Internet for this, for example, it can come out quite sexist) and, in the words of the Estampa collective, "they tend to repetition, they enter into certain obsessions".

Carme Torras, a professor at the UPC's Institute of Robotics and Industrial Informatics, as well as a novelist, confesses that she is “quite skeptical about mechanical art. The machines can imitate a painter, you introduce all Van Gogh and all Caravaggio and he will paint you a picture of New York today in the style of these painters, but is this creativity? For me, it's something very different."

For the British mathematician Marcus du Sautoy, professor at Oxford and author of Programmed to Create (Cliff), "AI may not be able to compete with Mozart, Shakespeare or Picasso, but could it be as creative as our children when they write a story or make a drawing? And could she, one day, learn to be creative? These are the issues."

For Torras, "AI can help a person's creativity, because it has a faster combinatorial capacity and can give us guidelines, but it will never devise a new way of painting, as Picasso did." “We do not understand – he continues – how human creativity works in the brain and, therefore, we cannot reproduce it. We can only reproduce logical reasoning, which is a limited universe. I think we will not be able to do that, because the biological substrate and the mechanical one are very different”. Even in the poems, she affirms, “it is noticeable, although they can be read, that there is no life experience behind it. The grace of literature is that there is a human gaze in it that allows you to connect emotionally, the machine only reproduces patterns”.

Blanca Pérez, curatorial director of Etopia, and participant in the European program of artificial art, believes that “this has only just begun. There are a lot of powerful companies that have launched to train huge models, of which we only see the tip of the iceberg”.

He admits that “the debate on authorship is opened: there is a software and a program trainer. There are artists, like Mario Kinglemann, who train their own algorithm, working with their own image base. The artists who achieve a certain originality is because they bring in their own harvest, and then there is a great job of selection and criteria”.

For Toni Hernández, professor at the Escola d'Art i Disseny de Terrassa, “a myth has been broken, that the human species exclusively has the treasure of creativity. The machines of the past generated their images or texts from data banks, the current ones are really inventing it, this is the great leap: what they create is no longer plagiarism, it is new”. For this expert, “that they can write a novel with a face and eyes is only a matter of time. A poem can no longer be differentiated. When we are able to introduce into them the linguistic laws –such as the brevity or frequency of words–, those of painting or audiovisual communication, another leap will be made. I foresee a first stage in which there will be novels written by AI, but more schematic, which could give rise to different literary prizes for humans and for algorithms, in fact there is already one for robotic theater”.

And these lines that have seen fit to continue until here, could they have been written by an artificial intelligence? Are you sure?