This is how "La Roja" was born: the first official tournament of the Spanish soccer team

As if it were the last list of Luis Enrique, the first official call of the Spanish Soccer Team was not liked by everyone, but they had to settle: "Perhaps some objection can be made to the team formed, but the fact is that they they have to represent us”, said the weekly Madrid Sport judiciously when the team left for Belgium to participate in their first official tournament, the 1920 Antwerp Olympic Games. 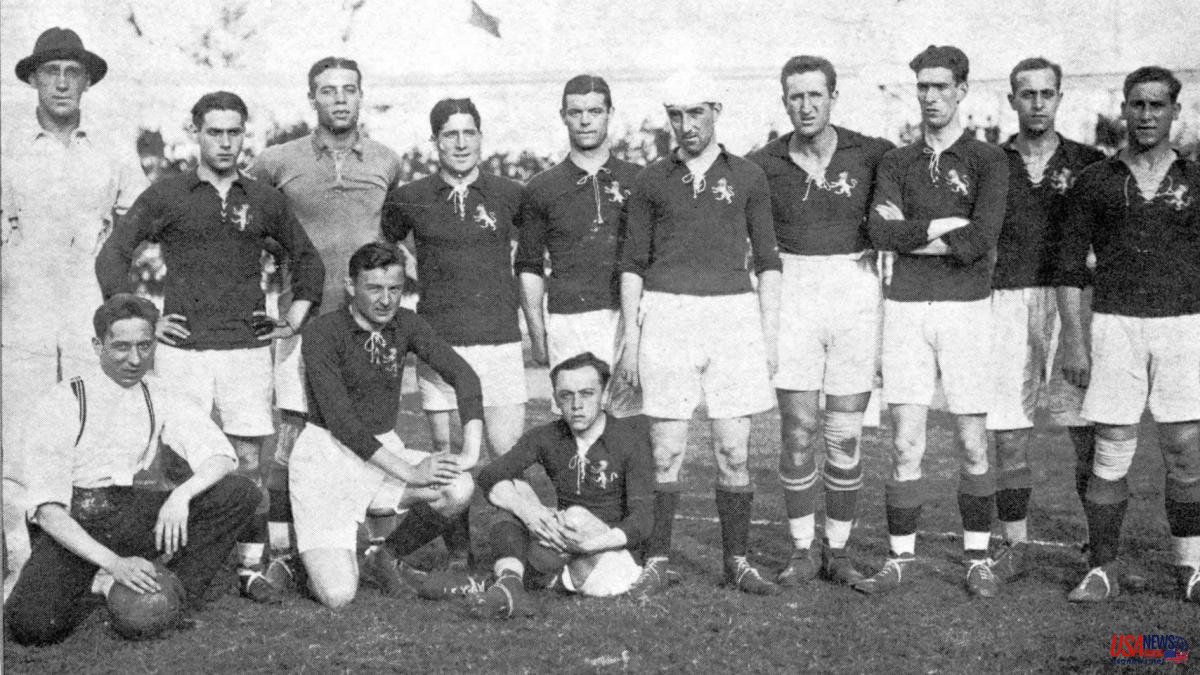 As if it were the last list of Luis Enrique, the first official call of the Spanish Soccer Team was not liked by everyone, but they had to settle: "Perhaps some objection can be made to the team formed, but the fact is that they they have to represent us”, said the weekly Madrid Sport judiciously when the team left for Belgium to participate in their first official tournament, the 1920 Antwerp Olympic Games.

With all due respect to the now-defunct magazine, the team that took to the pitch at the Joseph Marien stadium in Brussels on August 28, 1920 had real galacticos: suffice it to say that they played Zamora in goal and the mythical Pichichi up front, the same ones who Today they still give their name to the trophy that the goalkeeper with the fewest goals and the most goalscorer at the end of the League wins. The debut, by the way, went well: 1-0 to Denmark, with a goal from Arabolaza.

It was only the beginning. The future "Red" (which would first be "La Furia") stumbled against the hosts in the next game, but then they beat Sweden, Italy and the Netherlands. That rookie team would end up winning the silver medal, the only one that Spain took in those games and only the second of this metal in the entire history of Spanish Olympism. The ABC chronicle, published eight days after the match, spoke of the "enormous impression made among the other nations" because "they did not believe that the sport had such a development in Spain" and "they believed all of us were bullfighters."

If we compare that feat at the Antwerp Olympic Games with a modern tournament like the World Cup in Qatar, it is perfectly clear how much football has changed. That team had to play no less than five games in eight days, while the champion of this 2022 World Cup will play eight games in almost a month. Also only players from Basque, Catalan and Galician clubs were summoned, partly because they were, according to FIFA, "more accustomed to the muddy pitches they were going to find in Antwerp".

What has changed the most has been the professionalization of coaches, players and managers. The Spanish coach Paco Bru had been a player and was a successful coach, but he also performed in the circus as a strongman. One of those called up, Ramón Encinas, was not even allowed to travel because the International Olympic Committee found out that he had signed a professional contract with FC Barcelona and they only wanted amateur athletes.

As for the Spanish Football Federation, it was so poor that an aristocrat had to advance them 150,000 pesetas so that the team could travel to Belgium, and, once there, the team stayed in a school inside a convent. So that they could train, the former president of FC Barcelona Joan Gamper got a Belgian club to give them its facilities.

This is also partly due to the fact that the level of attention that "La Roja" aroused was not even close to what it is now. Although the journalists who traveled to Belgium for the Antwerp Olympic Games wrote chronicles, the media's obsession with soccer was not what it is today: the silver medal was not on the front page of the main newspapers, and some other reporter, such as Manuel de Castro, at times left the notepad on the grass to act as linesman in matches.

The origins of the Spanish soccer team, world and European champions, are that humble. It has come a long way since that match in Brussels on August 28, 1920, and it is not even 100% certain that it was the first. FIFA and the Royal Spanish Football Federation itself put the starting point there, but there is evidence of a match against France organized by a certain "Royal Spanish Union of Football Clubs" on May 25, 1913.

What is certain is that that "Red" lived up to expectations and achieved a level of success that it would not repeat until the 1964 Euro Cup, where it was champion, and then the European and world triumphs that came between 2008 and 2012. It is to see if the team that has gone to Qatar gives us the same joy, even without Pichichi or Zamora.