The reciprocal Sánchez-Aragonès word of mouth

Let's go first with the easy for unquestionable and already accredited. 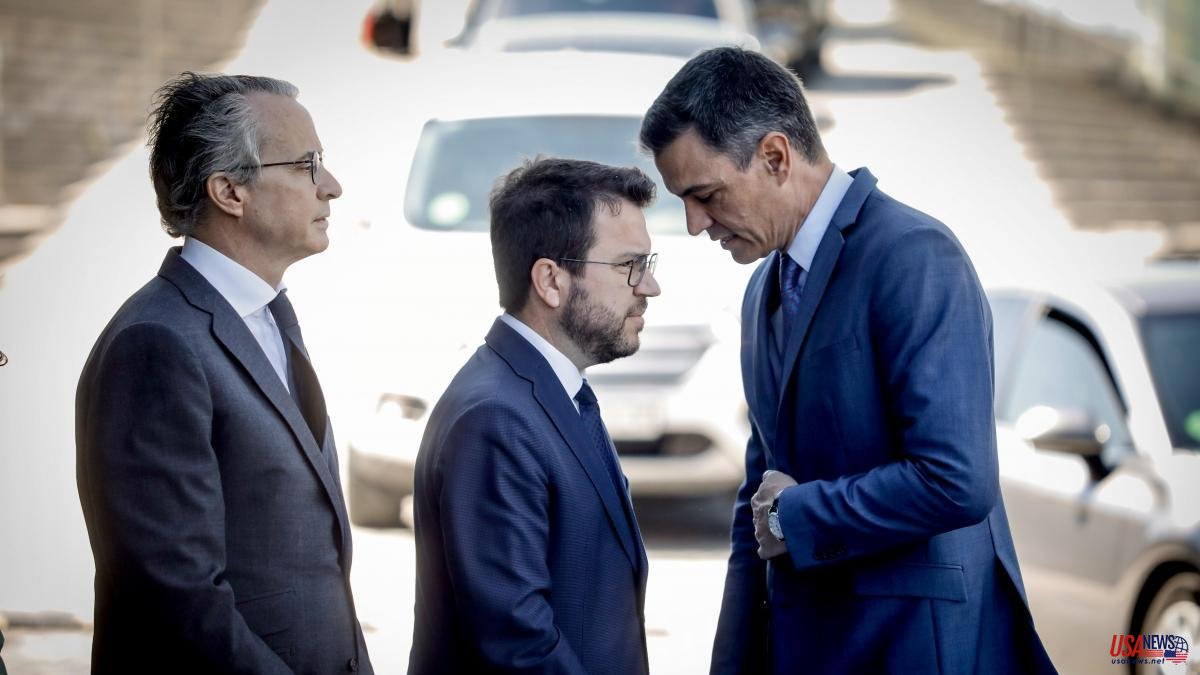 Let's go first with the easy for unquestionable and already accredited. Jorge Fernández Díaz, Alicia Sánchez-Camacho and Commissioner Villarejo's mafia clan continue to make numbers to champion the Wikipedia of ignominy. As leaks of new audios of conversations become known, it is clear that their natural state cannot be other than that of disgrace. It is equally accredited, and the truth is that it is as unjustifiable as it is inexplicable, that at this point the Spanish justice system still does not lift a finger to clarify the Catalunya operation. The PSOE yesterday asked the PP to assume political responsibilities. It would be more effective for Moncloa to pick up the phone to shake off the State Attorney General's laziness and force her to do her part so that, beyond the Andorran variable of the matter, the criminal amount of the matter can be elucidated if if any, and the names and surnames of those who should pay it.

No one in their right mind can doubt that in Spain public resources have been allocated to try –and in some cases achieve– the political execution of people for their ideology. Even so, the most serious thing is not that it has happened, but that at this point he continues without moving a finger to clarify it. It can happen in all democracies that a minister turns a ministry into a dunghill after confusing himself in the mirror with a crusader who has to reconquer Constantinople. What is not acceptable is that once all the signs indicate that this has been their way of proceeding, we should settle for taking note of what happened and to something else, butterfly. Sometimes you have to waste lines over and over again to insist on the obvious. They are wasted, then.

The difficult thing is to explain and give, not a meaning, but the meaning to the meeting between the Minister of the Presidency, Laura Vilagrà, and the Minister of the Presidency, Félix Bolaños. The meeting has served to announce that Pedro and Pere will see each other before the holidays, after a new meeting between Vilagrà and Bolaños, to once again unpack the agreement between ERC and PSOE two years ago that allowed Sánchez's investiture, insisting on the validity of negotiation as a method to address the conflict with Catalonia and to once again recognize that any political project that does not go beyond legality is legitimate and must be able to defend itself. All this seasoned with the need to recover a trust lost by Pegasus with new guarantees that give credibility to the negotiation, allowing the relationship between the two executives to resume normality and – not least – also in Congress, which is where they are going. to cook the beans of sanchismo between now and the end of the legislature.

All of this leads us to the unique meaning of the meeting, which was rooted mainly in the need for both governments and parties to gain time so that each one can keep their narrative strategy afloat and satisfy their most pressing political needs. ERC cannot afford an amendment to its entire political strategy so soon – negotiation at all costs – and the Socialists cannot indefinitely do without Republican support in the Congress chamber. The meeting between Vilagrà and Bolaños has been a reciprocal word of mouth so that both parties can recover a more stable and normalized breathing rhythm. But the truth is that both know that the main credits crossed between the two formations for this legislature have already been fully paid: some invested and the others pardoned. The void that remains until the elections requires staging and also secondary level agreements. Yesterday we lived an example and we have been promised two more before we go on vacation. Are needed. That is why, although they cannot return suddenly or completely, they cannot abandon themselves completely either. This is the meaning of yesterday's meeting between the presidents' sherpas-matchmakers.