The principality recovers the budgetary vigor prior to the pandemic 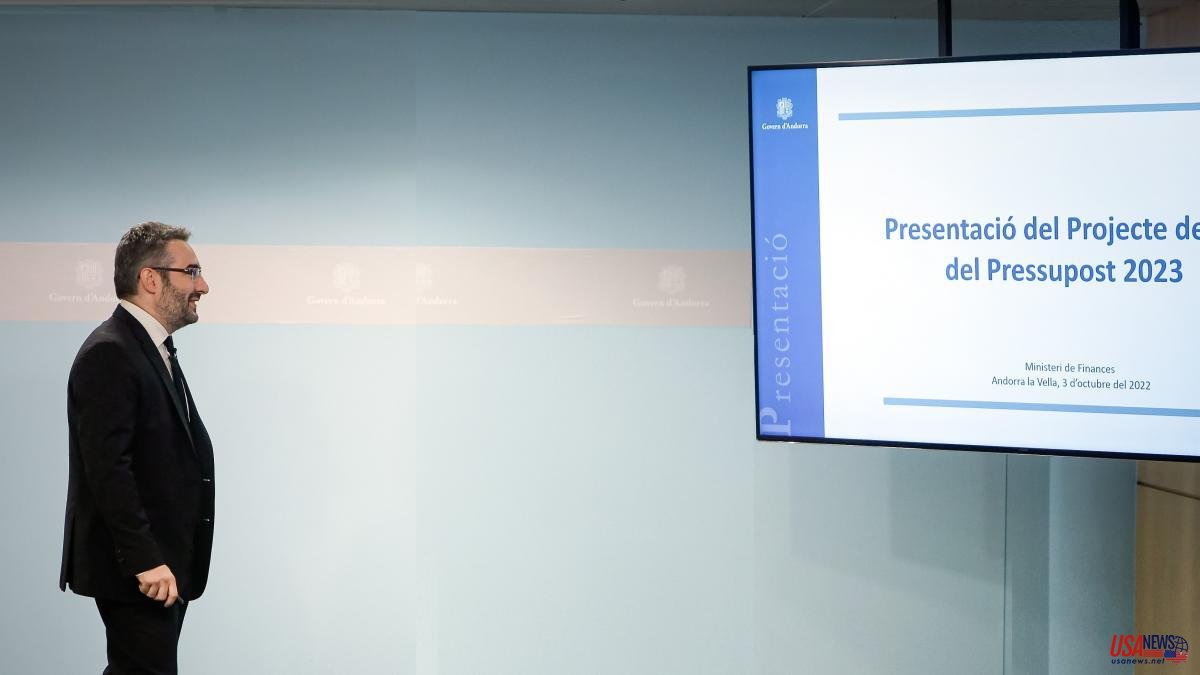 Andorra's accounts return to the pre-pandemic situation. The Budget bill for 2023 provides for revenue of 522.3 million euros, a figure that grows by 12% compared to 2022, and a projected deficit of 31.45 million, which is below 1% of gross domestic product (GDP). Public investment is also making a strong comeback: 44 million euros will be invested, one more than in 2019.

This deficit is expected to end up being less than what appears in the budgets "once these are liquidated, as has happened in previous years", in the opinion of the Minister of Finance, Eric Jover, who presented the bill. The fact of presenting numbers with the robustness of those that existed before 2020 allows the country to give effect to the guidelines set by the law on the Sustainability of Public Finances, Budgetary and Fiscal Stability, which is known as the rule of gold.

Apart from the expected deficit, the public debt of the General Administration, which the Government places at the end of 2022 at 1,190 million euros, does not exceed the marked limit, which is equivalent to 40% of GDP. The forecast, however, is that the public debt will continue to fall and go from the current 39.4% to 38.5%.

Within the income chapter, a notable increase in direct and indirect taxes is detected, which the Andorran Government considers conservative, "seeing the execution figures for 2022, well above the initial estimates," added Jover. Regarding capital income, the distribution of dividends from Andorra Telecom is maintained, but on the other hand there is no forecast of income from the FEDA (Forces Eléctricas de Andorra), since the company turns its efforts to moderate the impact of the energy crisis over the population. The Andorran Gaming Regulatory Council (CRAJ) will have a surplus for the first time and will make a contribution to the State, following the agreement reached with the Spanish Lotteries.

The best indicator of recovery is the volume of investment (44 million), which exceeds the investment of 2019. It is, therefore, a regular budget that will allow the Executive to invest again in infrastructure instead of spending on costs caused by the pandemic.

The Administration's plans are especially aimed at investments in housing, with items such as the projected affordable flats in Borda Nova (6.6 million euros), the purchase of homes (5 million) and sheltered housing from the CREI, with one million euros. The focus on the real estate sector is key, since it has gone from an investment of two million euros in 2019 to the 17 million projected for 2023.

Another important aspect in the investment chapter is that referring to mobility. The national heliport (3 million), the La Massana diversion (2.7 million) or free public transport play a notable role in the mobility investment item as a whole. An investment of one million euros is also planned to expand the Universitat d'Andorra, which has the highest budget in its history.

Furthermore, the Ministry of Finance has re-indexed the entire budget based on the Sustainable Development Goals (SDGs). This initiative makes it possible to accurately observe the Executive's budget effort. The analysis of the data shows that more than half of the investment items, 54 percent, are directly related to the SDGs related to the classic Welfare State, that is, health and well-being, education and quality, equality of gender, reduction of inequalities and peace, and finally justice and solid institutions.

The analysis of Andorra's macroeconomic data is also taken into consideration by the Government. The country has a positive evolution of the GDP and the rest of the main indicators. This situation strengthens the role of financial resilience that Andorra has shown in recent years with the improvement of indebtedness, the alignment of debt management with State policies (84% of the State debt is green, social and sustainable bonds ), the creation of international reserves and the bill that creates the figure of lender of last resort.