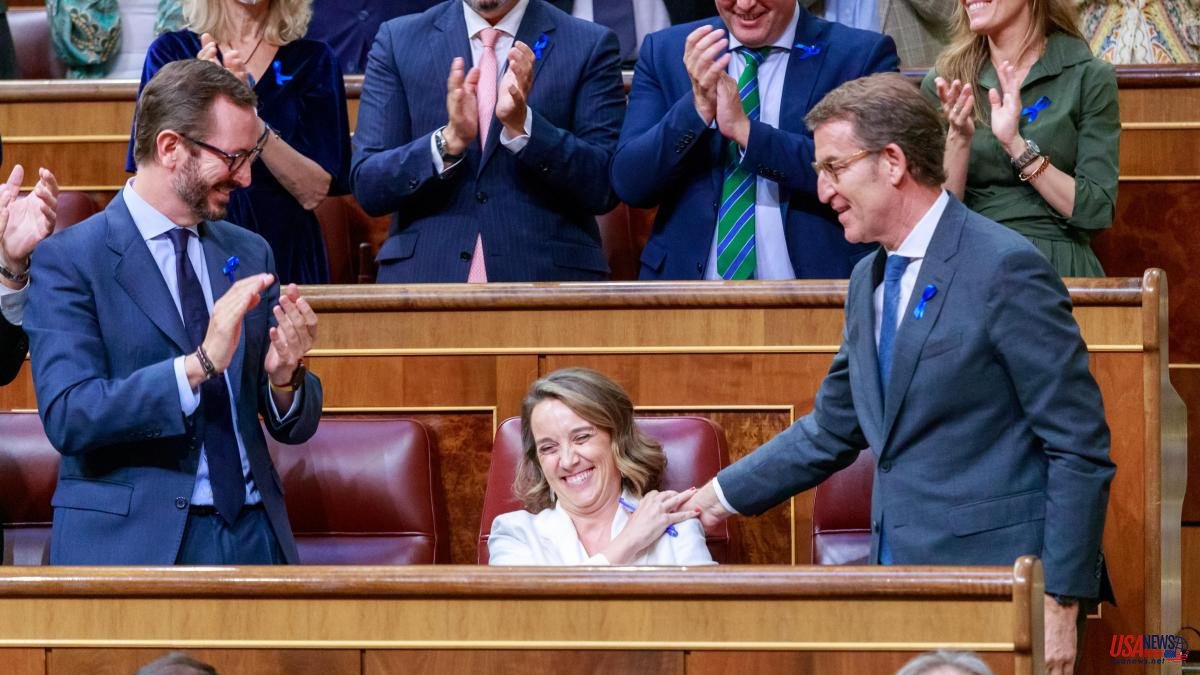 Neither in the replica, nor in the rejoinder. Cuca Gamarra avoided answering Pedro Sánchez on two occasions when he asked her if the Popular Party will support any of the measures announced by the Prime Minister himself in the morning session of the debate on the state of the nation.

The general secretary of the PP – who yesterday acted as spokesperson for the leading opposition party given the impossibility of Alberto Núñez Feijóo to do so given his status as a senator, and not as a deputy – remained silent in response.

Popular sources explained in the corridors of the hemicycle that "committing to something without knowing the details would be too risky knowing Sánchez's background", hence Gamarra stuck to the speech worked out the day before by the Genoa leadership.

In return, but not before accusing the Executive "of leaving a worse and poorer country with its policies", the PP spokeswoman relegated the economic debate to the background and reproached the Government for its alliances with Bildu, of which the agreement for the approval of the law of Democratic Memory.

Gamarra described the Government's pacts with this Basque group as "immoral", thus prolonging the criticism launched in recent days for how the Socialist Party of Euskadi had organized the recent institutional tribute for the 25th anniversary of the murder of Miguel Ángel Blanco at the hands of of ETA.

The PP's strategy initially aimed at displaying economic arguments to tackle inflation, and of which Feijóo had offered several spoilers in the previous days, turned towards accusing the Government of "wanting to rewrite history by betraying the victims."

The PP spokeswoman starred in one of the singular moments of this first session of the debate when she asked to keep "a minute of silence" that was seconded by the whole of the Chamber.

Gamarra's gesture not only did not cause the intended division –since together with Sánchez and the socialist caucus the representatives of EH Bildu also joined–, but, in addition, he was reprimanded by the president of Congress, Meritxell Batet, who reminded him that several points of the regulation had been skipped, since the minutes of silence must be previously raised in the Board of Spokespersons and approved by consensus.

But Gamarra did not change his speech one iota. The scope and revenue obtained last weekend with his strategy for the tributes to the Ermua councilor determined the structuring of the popular leader's speech.

To the point of putting both things – the administration of the Government and the fight against ETA – on the same level. Predicting that "that same spirit of civic rebellion that fed the Spanish 25 years ago is what now places us in front of this Government."

That was the roughest moment of this intervention. The complaints of the socialist caucus were followed by Sánchez's direct response: "Those who have really used the pain of the victims of terrorism for spurious purposes have been the leaders of the PP", recalling the hours after the 11-M attacks.

Who did focus on the economic situation was the leader of Vox describing the situation in Spain as "very serious" and warning that it could end up being "dramatic if Pedro Sánchez continues in the Government". Santiago Abascal stressed that the country already needs an alternative that expels him from Moncloa, and for this he outlined a speech aimed at equally criticizing the PSOE and attracting the PP. To whom he reached out to "repeal all the extremist legislative crap that has been brought into this House and the separatist illegalities."

Abascal drew a future of collaboration between PP and Vox that the absolute majority of Juanma Moreno in the last regional elections in Andalusia has moved further away than the ultra-nationalists would like.

And, convinced that the sum of the rights will be necessary after the general elections of 2023, he ended his speech speaking in the plural: "We will rebuild everything that they destroy and we will raise everything that they demolish: from the economy to the crosses," he warned Sánchez anticipating a last year of opposition legislature without quarter.