"An act of literary justice", said and repeated the director of the Institution of Catalan Letters, Izaskun Arretxe, and the Secretary of Diffusion of the Generalitat, Jofre Llompart. 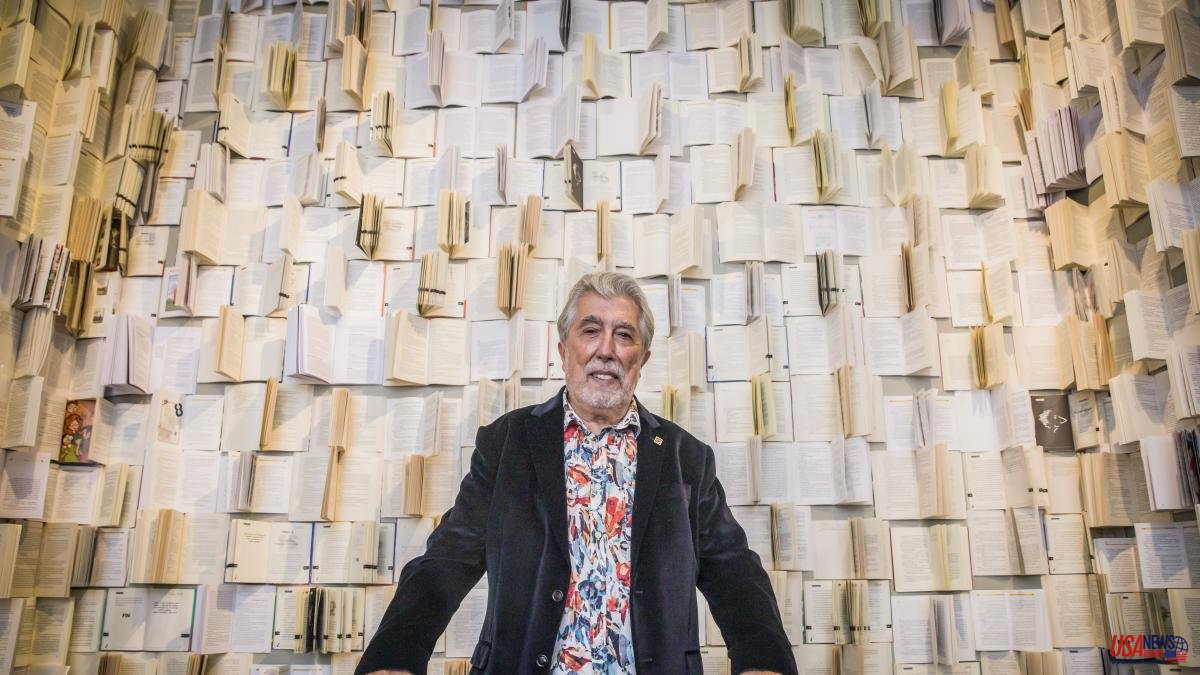 "An act of literary justice", said and repeated the director of the Institution of Catalan Letters, Izaskun Arretxe, and the Secretary of Diffusion of the Generalitat, Jofre Llompart. They were referring to the exhibition of the exhibition Jordi Sierra and Fabra. 50 years creating stories, which opened yesterday at the Palau Robert, with a tour of the writer's life and work, curated by the journalist and director of the Sierra i Fabra Foundation, Hortènsia Galí, and the music critic Jordi Bianciotto, and which will be open until October 30.

The exhibition thus wants to commemorate the 50th anniversary of the publication of his first book, History of Pop Music. 1962-1972 and the author's 75th birthday, and it does so in three areas, with a spectacular preamble with the walls lined with dozens of his books.

Then begins a first space dedicated to his childhood and some discoveries of that time (Stravinsky, Scalextric, bullying because he had a stutter, Barça) and samples of some of the first books he wrote are exhibited, in notebooks, from the age of eight. years. Yes, eight years. In fact, one of those books was shown to his father, who tore it up because he was convinced that writing could not earn a living. Much of this period is portrayed in the comic The long and tortuous road (Norma), with drawing and color by Carlos Moreno, published this week.

And he began to study to be a quantity surveyor while working in construction, and discovered the Beatles and another vocation, because at the age of 21 he began to write about music, a job that would give him money and fame and would allow him to travel all over the world. Music is the second area of ​​the exhibition.

"He is the founding figure of rock journalism in this country, understanding rock as the most important cultural movement of the 20th century," said Bianciotto yesterday, who highlighted his "erudition and encyclopedic sense combined with a passionate style that connected with readers." Sierra i Fabra collaborated on the radio and wrote or directed some of the main music magazines of the time: Popular1, Disco Exprés, SuperPop, Top Magazine... Records from his History of Rock Music are exhibited in installments, his first turntable, a large poster on the genealogy of Catalan rock in the seventies... and even a Trivial del Rock that he devised after speaking with John Helliwell, from Supertramp. And from here came, now 50 years ago, that first book, which would give way to many others, first related to music journalism, such as a mythical History and power of Catalan rock, published in Spanish in 1977 by Música de Nuestro Tiempo and reissued in 2007 by Enderrock. Or the numerous biographies, often pioneering, dedicated, for example, to Pink Floyd, The Beatles, David Bowie, Bruce Springsteen or, also, Miguel Bosé, Miguel Ríos or Joan Manuel Serrat.

His first novel, meanwhile, already arrived with The World of the Golden Rats, in 1975, the same year he won the Villa de Bilbao prize with The Revolution of 32 December. He continued publishing literature and journalism until one day he told his wife that he lived "too well", that he wanted to dedicate himself to novels and travel. "I'm leaving everything," she told him. And she, instead of complaining, replied: "We'll eat." Yesterday he explained that he knew he would be a writer: "There was no plan B."

And it went ahead, as some more than spectacular figures show: 540 books published, translated into 37 languages ​​and almost 15 million copies sold. In addition to the narrative for adults, it also entered the children's and youth, with more than 180 books and iconic series such as those of the rock detective Sam Numit. Among other books, he is currently carrying out the series for adults about former inspector Mascarell, of which he has already published twelve volumes, the last of which is Some days in January (Plaza

The third area of ​​the exhibition, thus, focuses on literature, and especially on its meticulous working method, with a lot of prior documentation and preparation, in order to finally be able to write each novel in a few days or weeks. “I'm not nervous, I'm hyperactive”, he explained yesterday to justify his work pace, which leads him to always have his head ready for the ideas that come and work on several projects at the same time. "I have always fought against time," he insisted. He writes on airplanes ("in a ten-hour flight I have come to write an entire script"), in the cinema, in soccer... and that he sleeps nine hours a day and until recently went to the cinema every day.

In addition, since 2014 it has also had two foundations dedicated to promoting reading, one in Barcelona (in the Sants neighborhood there is the Jordi Sierra i Fabra Cultural Center) and the other in Medellín (Colombia).

“These fifty years have flown by,” he assured yesterday. Given the results, it could not be otherwise.