The message to Nadal from Kyrgios, the tennis player without a coach who parked video games and pubs

The game that had to be the "most watched of all time", according to Nick Kyrgios, will have to wait. 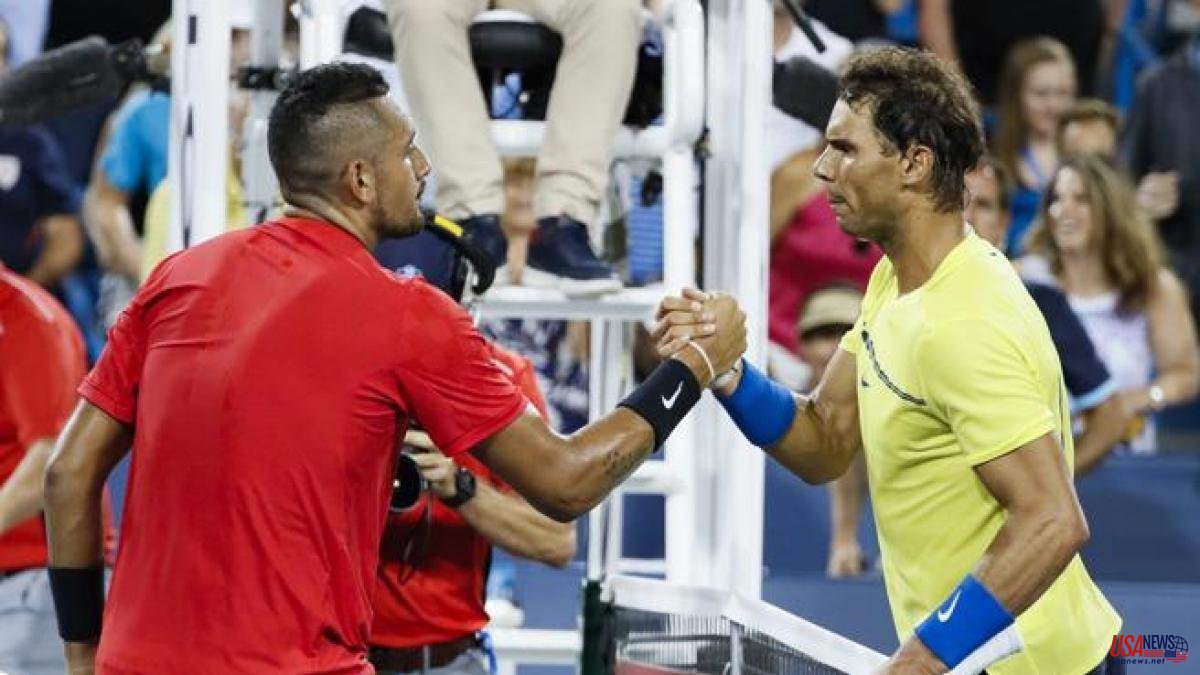 The game that had to be the "most watched of all time", according to Nick Kyrgios, will have to wait. Rafael Nadal's abdominal injury will prevent Wimbledon from seeing one of the most morbid duels on the circuit, nothing more and nothing less than in the final rounds of the Grand Slam, something unheard of until now.

Kyrgios is the antithesis of the Balearic tennis player. Problematic on and off the slopes, his controversial episodes are counted by dozens. Nadal has not been spared in the past, with whom he maintains a more tense than cordial relationship. "How much money does he have? How many Grand Slam titles does he have? He can take a hit," said the Australian in 2019 after an intentional action in the second round match at Wimbledon.

The night before that meeting, his representative had to remove him from the ear of a pub near the All England Club at four in the morning. Kyrgios was going through a bad time. He had lost the north and the illusion for tennis. When he qualified for the first Grand Slam semifinals on Wednesday and was waiting for Nadal, he admitted to having suicidal thoughts during that time.

One of the reasons was not knowing how to manage the pressure to which media tennis players are subjected. And it is that although at 27 years old he has not yet been able to make the leap on the circuit (in February he was ranked 137th in the world ranking), he always draws the attention of all eyes because of his character but also because of the indisputable quality of it.

Retirement was considered a year and a half ago, but something has changed in 2022. The turning point came with the victory at the Australian Open in doubles partnering with his inseparable friend Thanasi Kokkinakis. An atypical couple, by no means specialists in the modality, who turned each match at Melbourne Park into a (positive) show in front of their audience.

Parked were blatant disrespect (letting go, insults, spitting, clashes with the stands...) although it is inevitable that he will continue to drive some of his opponents crazy, especially with his low serve that turns into a drop shot. In this edition of Wimbledon he had his pluses and minuses with Stefanos Tsitsipas, who defined him as a "bully".

"Now things have changed in my life. I have discovered that there are many people who want me to continue playing. I feel that I still have a lot of gas in the tank, that I am in the best moment of my career and mentally I am great", pointed out Kyrgios after winning Chile's Garin in the quarterfinals. It was in the London tournament, after very high expectations in his junior stage, that he became known to the general public by defeating Nadal in 2014.

"I have always felt that I was the first to be able to explode young, beating Rafa at Wimbledon. I think I was the first to show the rest, Zverev and Thiem, that it could be done. I was the first to break the mold. Today you see guys, like Alcaraz and Sinner, who are not afraid of anything. Many players believe that Nadal, Djokovic and Federer were gods and that they could not be beaten. I think I showed the world that they are also human", he reflected on that match distant in which he was presented with a wild card.

Not only Kyrgios believes in that change. Her mother Nill has revealed to different Australian media that her son has begun to discover the world when he travels to play tournaments, something that he did not use to do. "Instead of going to visit the Great Wall of China or Niagara Falls, he would lock himself in his hotel room and play his video games." Now the parent sees him "enjoying life."

In his box at the moment only his partner or a friend will be seen, since Kyrgios is still without a coach. "I don't want to put anyone in such a problem, the truth is that I don't have a coach because I don't want to annoy whoever is in charge of it. I know my game well and I know what I can do," he recently said on the court. In London he is accompanied by his father, who is in charge of cooking "rich" dishes for him.

We will have to wait if the change in attitude is temporary or somehow something more definitive. What is unusual is that Kyrgios dedicates a post to Nadal, whom he considers the best of the Big Three, on social media. "Different players, different personalities. I hope you recover well, we all hope to see you healthy again. Until next time," he wrote with an image of the two shaking hands after the game they played this year in Indian Wells.

Kyrgios is the first Australian to reach a Wimbledon men's singles final since 2003, when Mark Philippoussis did it. The last Australian Grand Slam champion was Lleyton Hewitt a year earlier in London.

Once his participation in the British capital ends, he will return to Australia, where in August he will have to appear before a court in Canberra for the accusation of mistreatment of a woman at the end of the previous year.